The Cure for Doormat Disease

Many people suffer from doormat disease, and they don't even know it. Doormat disease is a rarely fatal but often painful condition where the spine of a person is replaced by a welcome mat.

You will often hear those affected saying "Yes," when they would rather say "no."

They often take better care of others than they do themselves.

They are described as "people pleasers."

The phrase "nice guys finish last" was created with these very people in mind.

The good news is DMD does have a cure. If you suspect that you, or someone you know suffers from doormat disease read on...

From the book "The Disease to Please" by Harriet Braiker, Margaret Paul, PhD

If you passed the quiz above, don't celebrate just yet! These aren't necessarily good things. Let's look at the list one more time!

1. I should always do what others want, expect, or need from me.

2. I should take care of everyone around me whether they ask for help or not.

3. I should always listen to everyone's problems and try my best to solve them.

4. I should always be nice and never hurt anyone's feelings.

5. I should always put other people first, before me.

6. I should never disappoint anyone or let others down in any way.

7. I should never say "no" to anyone who needs or requests something of me.

8. I should always be happy and upbeat and never show any negative feelings toward others.

9. I should always try to please other people and make them happy.

10. I should try never to burden others with my own needs or problems.

Believe it or not there is a big difference between just being nice, and being a doormat. There are plenty of people out there who are kind, compassionate and helpful to others without crossing over into being a doormat.

The difference is in how they classify needs and wants, their own, and other peoples.

On the opposite scale are those who place their wants above the needs of others, with a total lack of concern for the welfare of others, they are the Me-Me's in life.

Sadly the Me-Me's are often attracted to the doormats for this very reason, and there is where the problem lies.

The doormat gives, and gives, and gives until eventually heavy resentment builds up. They give until they are sucked dry, and can't give any more... then the Me-Me is left wondering what the hell happened.

A doormat tends to rank needs in the following order:

A healthy person sees the importance of needs more like:

Their own needs, then the needs of others, wants are evaluated evenly.

When you enter into a relationship with someone, there is something of an agreement that you will meet one anothers needs. When one person refuses to acknowledge the needs of the other, the relationship ceases to function. Instead the taker takes on the role of a parasite, and the giver the role of unwilling host.

Unless there are very good reasons that the other person can't meet your needs, such as a serious illness or injury, recent trauma, etc. If you find yourself consistently functioning in a relationship with unmet needs it is time to reevaluate your definition of relationships.

Many people do not know the difference between needs and wants.

While a person may need food, a person merely wants a steak.

While a person may need water, a person merely wants champagne.

While a person may need clothes, a person merely wants designer labels.

While a person may need money to survive, a person merely wants to be wealthy.

A need is something you must have in order to survive, without it you may die or at the very least suffer needlessly.

Nobody has ever died from a simple lack of wants, it just sometimes feels like they will.

So the first step in learning how not to be a doormat is learning to differentiate needs from wants. Thankfully Abraham Maslow did a lot of this work for you!

Even though Maslow gave us a blueprint, everyone's needs are different.

My grandmother eats one, maybe two meals a day and remains healthy. I eat dozens of small meals a day, also known as snacking but rarely eat a full meal. My kids need several full meals a day, my husband needs two large meals. We all need to eat, but we all have different ways of meeting that need.

So what are your needs? Giving yourself a clear idea of what your needs are, and including the wants that are highly important to you will give you a firm ground to stand on while your fragile backbone is regrowing.

If you do suffer from guilt, stop and ask yourself if you really are damaging the other person by telling them no. Are there likely to be lifelong consequences, could your decision cause death? Most likely no.

In reality, you could be doing them a huge favor by allowing them to be responsible for their own actions, to seek out their own solutions, and be more in control of their own life. You might just aid them in growing up! Good job!

When someone asks you to do something for them stop and consider your needs first. If you are sick, then you don't have to give them a ride to the store. If you already had plans it is okay to say so. It's okay to say no, because taking care of yourself when you are ill is a valid need.If you really want to do it, have time and resources then it is okay to say yes too. Just make sure that yes is a conscious decision.

If you feel guilty every time you say no this step will help a lot in alleviating that guilt. Just remind yourself that you have to take care of yourself before you can take care of others.

Regrowing a backbone is not going to happen overnight. At first you are going to feel like you aren't getting anywhere at all. The people who have grown used to you being a doormat aren't exactly going to be thrilled with your change of attitude.

When you change, the first reaction of people in your life is "Change back!" Sometimes it seems so much easier to comply. You can't blame them, they've had an easy target for a long time and the harder you try to change, the harder they are going to try to change you back... at first.

If you keep going, you will find that it becomes easier with time. Not only for you to assert yourself but for others to accept it.

Don't go out and try to change your whole world over night or you are just setting yourself up for frustration. Just a little bit at a time, start with small decisions, or with one relationship, then branch out from there.

Once you start standing up for yourself and getting used to it, you begin to find out who your real friends are rather quickly. The people who were just using you fade into the background, and the real friends stick around.

However, there are some, more personal relationships where it isn't that easy. Your mother, your spouse, a sibling. You might find yourself being snippy with them, almost going from a doormat to a full on Me-Me.

If this happens think about a lobster. Just bear with me for a moment while I explain.

A lobster outgrows its shell about once a year, at which time they shed the old shell and "grow" a new one.

Molting is a very dangerous process for a lobster, because for a time after they shed the old thick shell (in a process known as ecdysis, from the Greek, ekdysis, which means "getting out") and before the new solid shell hardens they are completely vulnerable.

They usually stay in seclusion for a few days, but the new shell doesn't harden totally for a few months.

When I first had a chance to observe this process I realized it was very similar to what I experienced as I was growing a new backbone, and learning to be more assertive.

It begins as an uncomfortable process, and then for a time you feel exposed and vulnerable, sometimes a little too sensitive about others taking advantage of you. In reality you are just protecting that fragile new backbone until it is strong enough to support you on it's own.

After I finally learned to say no, I said it a lot. I was just like a toddler, No, No, No, Nooo, NO!

It took me awhile to even back out, so if you begin to cross over into anger and oversensitivity just remember the lobster shell, and try not to do any damage to yourself or others while you are waiting for your new shell to harden.

Don't be a people pleaser! 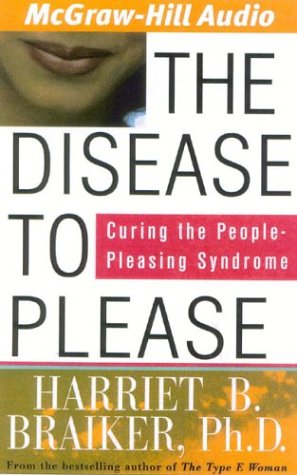 The Disease to Please: Curing the People-Pleasing Syndrome
Buy Now

Pleasing People: How not to be an approval junkie
Buy Now

Pleasing You Is Destroying Me: How to Stop Being Controlled by Your People-Pleasing Habits
Buy Now

When There's Not Enough of Me to Go Around: Life Solutions to Perfectionism, People-Pleasing & Performance Pressures
Buy Now