My Gums Are Randomly Bleeding - Do I have Gingivitis?

If your gums are randomly bleeding, and you started to worry about your oral health, then maybe the bleeding is not so random, and there is an explanation for it. Most likely this is due to gingivitis, a dental problem that can be corrected with a proper oral hygiene.

Bleeding Gums is a problem for many people, no matter what part of the world they live in. In North America more than 75 percent of the people above the age 35 suffer from periodontal disease. Sore gums are a problem for many of us, and this is usually the first sign we need to think more seriously at our dental hygiene. If your gums bleed randomly you could have gingivitis, a periodontal disease, that can progress in other more serious diseases if not treated properly.

Will help gum to heal as fast as two to four weeks.

The specially designed, contoured brush head, will remove the plaque all along the gum-line, in hard to reach places where the plaque will affect your gums.

The great reviews on Amazon tell all about the efficiency and effectiveness of this great brushing system.

Other than periodontal disease, (or gum disease), the bleeding of gums can also be caused by: pregnancy,

The most common cause of gingivitis is a poor dental hygiene. A poor oral hygiene, will allow the dental plaque to develop above the healthy levels, and the bacteria that populates the plaque will produce too much acid that will harm both your teeth and your gums.

Gums and teeth are not the only ones that are affected by plaque, recent studies have shown that abnormal dental plaque can cause heart problems. Further, if plaque is not removed it will develop into tartar, which is certain to cause you gingivitis.

There is enough scientific evidence that indicates that gingivitis, if not treated, can develop into a more serious form of periodontal disease - periodontitis.

Quite often, people complain about bleeding after a deep cleaning at the dentist. Most of the cases this is only a temporary issue, that will go away within 24 hours. If it doesn't, call your dentist. Avoid blood thinners during this period, even aspirin. This could make it worse.

Soft picks are a great way to clean between the teeth, and it's so much easier than flossing. The picks are designed to be very gentle on your gums, will fit in very small places, and will help removing plaque and tartar, hence your gums bleeding will decrease. However, the soft picks only work for people with enough space between the teeth.

How To Stop Randomly Bleeding Gums - The First Step to Preventing Receding Gums?

If you ignore the randomly bleeding of your gums, in time this could progress into a more serious condition, the periodontal disease. Periodontal disease will make your gums recede in the more advanced cases.Treating receding gums is not easy, but is definitely something manageable, if discovered in time. The most important thing is to get organized, determined, tenacious and make a plan. If you are determined you can reverse receding gums in a few months to one year. If your gums bleed only occasionally, your gums have already started to recede a tiny bit, but is not too late. However, you need to start your plan to treat the gums as soon as possible and do not let it progress into a more serious condition.A deep cleaning at the dentist is the first step, but even without the deep cleaning, you should immediately start a fast-track recovery for your gums. All of the following will help your gums to get healthy and stop the "pink in the sink": 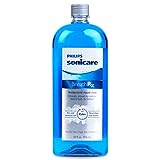 Special formulation that prevents the developing of the plaque and eliminates bad breath.

Gentle, with a strong antibacterial formulation, alcohol free, will help you fight plaque and tartar.

Do not overuse though, as with any other mouthwash. Overuse of any mouth rinse will kill your oral flora along with plaque. The flora in your mouth is essential for your gums' health.

Use any mouthwash on a regular basis only until your gum bleeding stops, and then continue with a less often usage.

Brushing and flossing are in fact the most effective and safe for removing plaque. You can also check my page about how to remove plaque from teeth. 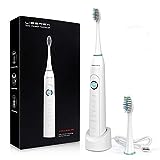 Advanced cleaning between teeth to emulate flossing with the special designed brushes: “Precision Clean”. The “Pro White” brushes will help with an advanced cleaning and whitening, with a design inspired by the dentist’s polishing cup