Jacob is an activist & writer living in D.C. He loves sharing his unique expertise on a wide-range of health & lifestyle topics.

What is This Itchy Rash on My Chest?

A few summers ago, I noticed my chest was itchy, especially when I would sweat a lot. After being outside and getting itchy & sweaty one day, I came in, removed my shirt, and examined my skin closely in the mirror. I noticed a pale, blotchy rash on my chest. The spots were pale brown...a few of them had a pinkish hue. I decided to schedule an appointment with my primary care physician to get the rash checked out.

A few days later, I had my appointment and the doctor quickly identified the cause of my rash and the itchiness I had been experienced. She assured me it was nothing to be overly concerned about, and in fact was a common skin condition that was easily treated. She told me I had tinea versicolor. I had never heard of this and wanted to learn more, so now that I knew what it was I came home and began to do research so I could understand this ailment better.

What Exactly is Tinea Versicolor?

I found out that tinea versicolor is a relatively common skin rash caused by an overgrowth of the fungus malassezia. Often times, this fungi appears as clusters of small reddish or brown spots on the skin of the chest, neck, arms, or genital areas. This rash can be itchy, and is often made worse by exposure to the sun or by sweating. Tinea versicolor causes discoloration of the skin that will usually not go away without proper treatment.

People afflicted with this dermatological condition should not be embarrassed. It is estimated that up to 20% of the world's population has been affected by this condition at some point in their lives. Some people's immune systems have no problem keeping the tinea fungus in check, while other people's have a tough time keeping the growth at bay. Fortunately, the skin rash and discoloration caused by tinea versicolor can be easily treated by a variety of over-the-counter medications.

Those with more severe cases, where the skin rash and discoloration covers a significant portion of the body, may wish to see a doctor before beginning treatment. Although over-the-counter topical medications are extremely effective at treating tinea versicolor, a prescription oral anti-fungal medication may be preferred when treating large areas. Any dermatologist or general practitioner should be able to diagnose this condition and write a prescription for its treatment.

More About the Signs & Symptoms of Tinea Versicolor

How Can I Treat Tinea Versicolor?

My research revealed that treating this skin rash is a relatively easy and straightforward process. Since tinea versicolor is caused by a fungus, most over-the-counter anti-fungal medications will quickly and easily treat the problem. The most commonly recommended home treatment for this condition is the application of Selsun Blue dandruff shampoo directly to the skin. After a couple of weeks of daily applications, the fungus will be killed and your skin's appearance will start to return to normal.

Other anti-fungal creams and sprays, such as those used to treat athlete's foot and jock itch, will also clear up this itchy rash. It is important to note that the discoloration of the skin will take a few weeks to clear up regardless of the treatment you use. Once you have successfully treated your tinea versicolor, repeat your anti-fungal treatments once a week to keep the pesky skin disease from returning.

I Was Able to Treat My Rash Within a Few Weeks

Following my doctor's suggestion, I began to apply Selsun Blue shampoo to my skin a few minutes before I showered, then I would rinse it off and shower as normal. Within a few days, I noticed my skin was much less itchy and the blotchy patches were much less pronounced. I followed the Selsun Blue regimen every other day for about 3 weeks, and by the end of that period, my skin was completely clear.

After my tinea versicolor was cured, my doctor suggested using the anti-fungal shampoo treatment on my skin once a week just to keep the fungus at bay and prevent any recurrences. I have worked this into my regular bathing routine, and I am happy to report I have had no further issues with this fungal skin rash.

Treatment Products from the Article 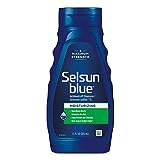