If you're someone who gets canker sores, the secret to fewer outbreaks could be as simple as switching to toothpastes without sodium lauryl sulfate. This surfactant, which is found in industrial cleaners like car wash soaps, engine degreasers and floor cleaners, is also found in most popular toothpastes. Sodium lauryl sulfate (SLS) is great for making things foam. But it's also great at causing skin irritations and canker sores. So if you're looking for a way to avoid those painful mouth sores, keep reading to learn more and to get an SLS-free tooth paste list. 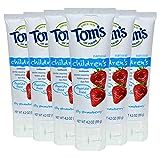 SLS is used as a skin irritant in clinical studies

The irony of modern technology is that low levels of harsh chemicals are often found in common household products because they're not considered dangerous in small doses. This is certainly the case with sodium lauryl sulfate (SLS), a common ingredient in several different kinds of personal care products. Ironically, this chemical, which is used for its lathering properties in shampoos, shaving creams, bubble baths and toothpastes, is also used around the world in clinical tests to create skin irritation.

A 1983 report in the The Journal of the American College of Toxicology noted, "...Sodium Lauryl Sulfate is used around the world in clinical studies as a skin irritant. SLS is the universal standard, by which a measured percentage is evaluated to promote a given level of irritation and reaction."

In addition to causing skin irritation, sodium lauryl sulfate is also linked to greater incidence of canker sores, those annoying and painful lesions you can get inside your mouth. Several studies have found a connection between SLS and canker sores, and the Mayo Clinic lists it as one of several causes of these sores, also known as aphthous ulcers.

So why is a skin irritant used in personal care products designed to touch our skin? Because the problems with the chemical are usually related to prolonged contact, and the International Journal of Toxicology's Final Report on the Safety Assessment of Sodium Lauryl Sulfate and Ammonium Lauryl Sulfate said, SLS "appears to be safe in formulations designed for discontinuous, brief use followed by thorough rinsing from the surface of the skin."

Unfortunately, if you're someone with sensitive skin or a tendency to develop canker sores, sodium lauryl sulfate isn't an ingredient you want showing up in your bubble bath, shaving cream, shampoo or toothpaste.

Did You Know SLS Was a Skin Irritant? - Take the poll!

Before reading this article, did you know SLS was used in clinical trials to cause irritation?

How About Making Your Own Toothpaste? - Try this natural alternative

What Are Your Thoughts on SLS-Free Toothpastes Without Sodium Lauryl Sulfate?