Why White Bread is Bad for You

"The whiter the bread, the quicker you’re dead!" – old saying.

Bread made from refined white flour is certainly not good for your health, its true. There is a little known fact that numerous scientific studies have proved time and time again that certain food items that are commonly consumed in our modern, fast living diets that are detrimental to our health.

One of these is white bread, a mainstay of most people’s diets. Believe it or not, eating white bread is bad for you!

This may be something you won’t be too pleased to hear, but if you want to improve your health, lose some weight and avoid the possibility of ending up with type II diabetes, then white bread will have to go. This hub page takes a look at why this is and why, if you want to enjoy good health you really do need to avoid white bread or even exclude it completely from your diet. 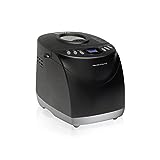 There are plenty of great, healthy alternatives to the common white loaf in bakeries and supermarkets these days. Wholemeal or whole grain breads are very common and actually taste fabulous.

But not everyone wants to buy alternative types of bread at the shops, especially if they are so deeply habitual about buying the white variety. But this is where the fun begins, because you don't even need to buy specialist breads at the shops.

Did you know that you can actually make your own healthy loaf at home? Have you ever tasted a freshly baked loaf that someone just made and wondered how they got it to taste so amazingly good?

Hint: You really can make your own healthy wholegrain bread at home. Either make it the traditional way, or easily and conveniently with a breadmaker!

Why You Should Exclude White Bread From Your Diet

White bread is made from refined white flour containing several unwholesome constituents and very little in the way of nutrients and dietary fibre, essential for a healthy digestive system and a stable metabolism. This is why:

Refined white flour is produced from the whole wheat grain which is then subjected to the refining process which removes all traces of the husk, or bran and along with it all the goodness contained in the grain. It is then bleached using chemical bleaching agents which contain chlorine and dried in kilns at high temperature to kill any remaining beneficial constituents.

This insipid, bland, tasteless powder then has gluten added, which is a product that an increasing number of people are becoming allergic to, which helps to produce a more evenly risen and air filled loaf. A standard while loaf also has sugar added to enable the baker’s yeast to prove the dough and make it rise. Salt is also added to check the progress of the yeast and prevent the loaf from rising too much, or over-proving.

In my own opinion (and that of many others) eating mass produced white bread can be somewhat likened to eating cardboard, such is its blandness and lack of any useful dietary benefit whatsoever. Small bakery breads and home made loaves usually taste a little better but because refined white flour is used in their production, there is still no health benefit.

The Beginner’s Guide To The Wheat Free Diet: Surprising Reasons Why Wheat Is Bad For You
Buy Now

So what are the negative health aspects of eating white bread?

To begin with, as with white pasta and other products made from refined white flour, the standard white loaf contains a large proportion of high GI (glycemic index) carbohydrates. These carbohydrates cause sugars to be released quickly into the bloodstream. This causes a rapid rise in blood sugar levels which triggers a similarly rapid release of the body’s own sugar regulating hormone, insulin.

This hormone is secreted in the pancreas and is responsible for regulating blood sugar levels. Insulin is what people suffering with type 1 diabetes have to inject to regulate their blood sugar levels because their body does not produce sufficient naturally. Type II diabetes is a rapidly spreading disease brought on by too frequent imbalances in blood sugar levels causing insulin production to become overworked, which eventually leads to the problem and all the negative health aspects associated with it.

Other negative health aspects come in the form of raised levels of bad LDL cholesterol in your bloodstream. This can lead to problems such as heart disease related to the narrowing of the arteries. When levels of LDL cholesterol become too high artery walls thicken and blockages can occur, leading to thrombosis (blood clots) as well as high blood pressure.

Another negative effect of eating white bread is on the body’s metabolism. This is retarded causing reduced efficiency in digestion and greater fat storage, which is more often than not accumulated around the belly.

In fact, this is one of the main reasons why weight loss is so difficult for people who continue to eat this popular staple. Not only that, but it makes you feel more sluggish and less inclined to want to exercise.

The lack of dietary fibre is a big problem for your digestible tract especially the intestines that finish the job and allow waste to leave the body.

When there is little or no dietary fibre present in your diet, your colon will suffer and be unable to effectively remove all waste products from the body. This leads to such diseases as Crohn’s, Irritable Bowel Syndrome (IBS) and can lead to cancer of the colon.

But all is not lost! While eating the white kind can be bad for your health, bad for your weight and bad for your digestive system, there is a nutritious, healthy alternative!

The Alternative to White Bread

You don’t have to give up bread from your diet, just the white kind. The viable alternative is of course the brown variety, otherwise known as the wholemeal or wholegrain loaf. You can make your own easily with a bread maker if you wish.

This is produced from wholemeal flour which is not refined in the same way as white flour. Wholemeal flour retains the husk of the wheat, or bran which is where all the nutrients and dietary fibre exist. There is no bleaching either and gluten levels are generally lower than in white flour, although you should always check the label for this information first.

The metabolism is stimulated rather than inhibited, meaning that your digestive system gets a boost in efficiency and less fat gets stored. This is good news for slimmers and anyone concerned about their weight.

Wholemeal flour products like brown bread contain high levels of dietary fibre. This is essential for the functioning of the colon and the complete digestion of food and waste elimination. They also contain lower levels of bad LDL cholesterol with higher levels of good HDL cholesterol. This means healthy arteries and a better normalised blood pressure, bringing with it better health and less concern over the negative effects of white flour products.

To finish things off, in mine and many other people's opinion, brown or wholemeal bread tastes good and doesn’t have that cloying, pasty texture that the massed produced white type tends to suffer from. Make the switch to wholemeal bread and you’ll quickly grow accustomed to its taste and texture.

Soon you’ll find yourself preferring its superior taste along with all the health benefits and goodness that come with it as part of a healthy, tasty diet.

Thanks to a comment made by someone who decided to include a comparison of the two types of bread, I've had to add this paragraph with more accurate nutritional information so that people don't get put off by in your face figures like that - a trick used by advertisers to get you to want something. So here it is:

The above results are analyses produced by different authorities. They show certain variations in the levels of nitrogenous matter, cellulose, and carbohydrates. However they all agree closely enough to show that chemically speaking, bran contains all the requisites for nutrition.

The nitrogenous ratio varies from 1: 2.8 to 1: 4.3. Among the total salts represented are potash, lime, magnesia, soda, phosphoric acid and silica.

There is a full nutritional composition chart of wheat bran available for your information if you want to know exactly what is in the bran that is included in loaves made from wholewheat flour that is missing from white bread. The chart is too complex to re-create here, so to view it, please follow this link: www.fineli.fi/food.php?foodid=116&lang=en