My Zipfizz Review: I LOVE THIS STUFF!I have been drinking Zipfizz energy drink everyday for about three years now. It gives a nice clean level of energy without feeling jittery or having your heart race. Its energy potential comes from nutrients instead of sugars and large doses of caffeine. It truly is a natural alternative to those calorie laden energy drinks. I don't drink coffee, so this is my morning drink of choice. I sometimes drink two a day, a least 4-5 hours between though. I personal like grape Zipfizz the best; my zipfizz review will be on this flavor.

It tastes so good: it has a very typical grape flavor that one might find in Kool-Aid or grape soda---but it's natural. The powder also dissolves quite nicely: not gritty at all. It calls for 16-20oz of water. I personally like a little more water though (at least the 20oz recommended). I will use 24-30oz personally. It's a bit too tart for me with as little as the sixteen ounces. That's the citric acid---the first ingredient. I drink mine in a large cup. I place the powder in the cup and mix a little water in it and mix that up to get it started; I then pour in the full amount of water to taste.

IF YOU ARE GOING TO POUR IT IN A WATER BOTTLE YOU NEED TO DRINK UP SOME OF THE WATER FIRST. If you do not, the product will fizz up and slowly erupt over the sides of the bottle. It is quite messy. After making some space in the bottle, pour in the Zipfizz powder, close the bottle, and shake vigorously. It will not explode after shaking like a soda would.

Printed on bottom of Zipfizz Tube

This small warning or disclaimer is printed at the bottom of the Zipfizz tube after the nutritional information:

Store at 15-30° C (59-86° F) Protect from heat, light, and moisture. Do not purchase if seal is broken.Contains 100 mg of caffeine from natural sources. Not recommended for children, pregnant women, people sensitive to caffeine, or people with a health condition. Do not leave mixed product in direct sunlight. Limit 3 tubes per day. 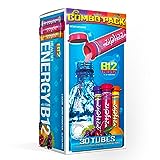 Q9. What's the difference between a milligram (mg), microgram (mcg), and an IU?

An IU (International Unit) is a unit of measurement for vitamins and other specific biologically active substances. The precise definition of one IU differs from substance to substance and is established by international agreement for each substance. There is no equivalence among different substances; for instance, one IU of vitamin E does not contain the same number of milligrams as one IU of vitamin A.

For example, vitamin E exists in a number of different forms having different biological activities. Rather than specifying the precise type and mass of vitamin E in a preparation, the Supplement Facts label specifies the number of International Units of vitamin E.

† Daily Value not Established
* Percent Daily Values (DV) are based on a 2000 calorie diet.

According to the Mayo Clinic, an 8-ounce cup of generic brewed coffee contains 95-200 mg of caffeine; a single espresso contains 40-75 mg. For its caffeine source, Zipfizz uses green tea and guarana seed extract which comes from a climbing plant in the maple family. Guarana is native to the Amazon basin and especially common in Brazil. It features large leaves and clusters of flowers, and is best known for its fruit, which is about the size of a coffee bean and is said to look like an eyeball. As a dietary supplement, guarana is an effective stimulant: its seeds contain about twice the concentration of caffeine found in coffee beans (about 2-4.5% caffeine in guarana seeds compared to 1-2% for coffee beans)

"...xylitol tastes and looks exactly like sugar, that is where the similarities end. Xylitol is like sugar, except good for you. While sugar wreaks havoc on the body, xylitol heals and repairs. It also builds immunity, protects against chronic disease, and has anti-aging benefits."

"Sucralose is made through a patented, multi-step process that starts with sugar and selectively replaces three hydrogen-oxygen groups on the sugar molecule with three chlorine atoms. The result is an exceptionally stable sweetener that tastes like sugar, but without sugar's calories."

There is some controversy behind the use of sucralose---like many other artificial sweeteners. There is concern about the chlorine molecules. You can search Google and do further research.

I personally wish they would use Stevia extract and Xylitol. Maybe I can start up a petition. 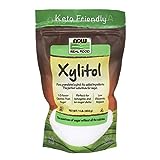 About the Zipfizz Energy Drink Company

"Zipfizz was created to bring about a change in energy and sports drinks category. With the help of our Corporate Officers & Clinical Health Advisory Board we stay on the leading edge of the energy and supplement industry. Our committee consists of successful doctors that have extensive clinical experience and use Zipfizz products in their practices, and daily lives. This team insures Zipfizz will remain the true Healthy Alternative to energy and sports drinks."

I buy Zipfizz at Sam's Club

You can buy Zipfizz from the company's website, but it is a bit expensive there. I buy mine at Sam's Club; they have the best price. Twenty tubes for $18.88 (as of July '12) and they come in their own display box. My Sam's Cub offers orange and grape twenty packs and a three flavor box or 30 tubes: citrus, orange, and grape.

Amazon has the second best price with the convenience of having it shipped to your home. Just click one of the Amazon Zipfizz.advertisements on this Squidoo lens.

Zippfizz comes in five flavors: grape, orange soda, pink lemonade, citrus, and berry. As mentioned before, I believe grape to be the best. Second best is Pink Lemonade; it does taste like lemonade. Citrus is okay; it tastes very similar to the pink lemonade. I don't like the orange; the taste reminds me of medicine from my childhood. The berry is okay; it has a decent flavor. I have never tried or heard of the creamsicle or orange cream flavor.

I have personally never experienced side effects from Zipfizz, except for the excess energy. That is its job though, and as mentioned before, it is not a heart-thumping jittery feeling. The sweetener Xylitol has been know to cause bloating and diarrhea in some some people though. But supposedly, one can develop a tolerance to that.

According to Webd, "Dog owners should know that xylitol can be toxic to dogs, even when the relatively small amounts from candies are eaten. If your dog eats a product that contains xylitol, it is important to take the dog to a veterinarian immediately.

Zipfizz as a Hangover Remedy

Zipfizz helps aleviate the effects of a hangover.

I always feel so much better in the morning (after a night out) when I have my Zipfizz. I wish they would make a non-caffeinated version to drink before you go to sleep (with an aspirin). The caffeine may not bother some people though. Zipfizz is not advertised for this, but it is great for a hangover. Zipfizz is not a hangover cure, but it surely is a hangover reliever. According to an article in Time magazine, "...alcohol is a diuretic, you lose a lot of vitamins and nutrients during a night on the town. The most important of which are vitamins B and C. Those people that use a vitamin B complex - a pill that includes B1 (thiamine), B2 (riboflavin), folic acid, B6 and B12, among others - to combat hangovers swear by their effectiveness. The most heralded is B12 (also called cobalamin), which performs a key role in the functioning of the brain and nervous system." Zipfizz has over 40,000 percent of your Vitamin B12.

As mentioned before, I drink this everyday. When I went for my biannual blood work, my doctor said my B12 levels were great. My Vitamin D levels were low though (don't know why, I drink a ton of organic skim milk).

Some of my Other Sites

Comments about Zipfizz Energy Drink - Let us know what you think