This is a page for all mommies (or daddies) who are looking for some inspiration, ideas on that perfect Big Hero 6 birthday cake for your little one’s birthday party. The cakes on this page have already been tried and tested by professionals – some who have gone on to create their own birthday cake business and some who like to create masterpieces for their own personal satisfaction.

The moment I saw Big Hero 6, I couldn’t help gush to all and sundry on how cute Baymax was and how even cuter was his version of fist bumping. If a grown up like me could go on and on about Baymax, imagine how it must be for kids. It should come as no surprise then if your kid insists on a Big Hero 6 birthday themed party next time around.

For those who are not aware, Big Hero 6 is an animated comedy action movie released in 2014 and inspired from Marvel Comic’s superhero team of the same name. It got commercial success as well as good reviews from critics. It’s a story of 14 year old Hiro, his microbot Baymax (a personal healthcare companion who can detect if you are unwell physically and emotionally) and how they together with their friends form a superhero team by the name of Big Hero 6.

Without any further delay, here is my list of top 10 yummy, Big Hero 6 birthday party cakes.

Tadashi (Hiro's elder brother) had programmed Baymax to be a huggable, caring health companion. Hiro resists his charms at first but soon melts. One of the most adorable scenes in Big Hero 6 is when they hug each other. "I Love Cakes by Sheila" has recreated this scene on a cake for her daughter's 9th birthday.

From the simple huggable robot, Hiro transforms Baymax into one of the Big Hero 6 superhero team with some dexterous reprogramming. Hiro also added some new physical entities to Baymax like a rocket fist and rocket thrusters that allowed him to fly. The chocolate cake here made by Onigiri Sweets shows Baymax entering his superhero mode with the help of Hiro who is busy preparing his armor.

This white cake with vanilla and lemon buttercream has been created by Gourmet Strategist -- another online boutique for yummylicious cakes and cupcakes. All decorations have been made out of fondant. The cake displays Baymax (in both his avatars), Hiro, Fred and the power of other characters. 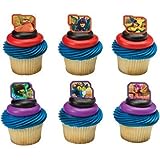 This birthday cake is in tiers and displays Hiro and Baymax. A simple but still visually appealing birthday cake for a Big Hero 6 themed birthday party.

Initially, Baymax’s armour was of a dull green colour, which enabled him to execute karate techniques downloaded into him by Hiro with ease. Once he’s transformed into a superhero, the attire changes to a more sophisticated red and purple, which enables him the added advantage of flight. This new armour is much more flexible and durable, appealing more to the eye. In this particular birthday cake, we see Baymax in his new avatar. The cake also includes a smaller version of the simple and huggable "marshmallow like" Baymax at the side.

This two tier yummy cake is made up of chocolate mousse and has completely edible Baymax and Hiro figurines placed right at the top of it. The cake has a smooth finish plus the pop of yellow gives it a distinct and unique touch.

“Adventures of an Amateur Baker”, claims the title of the blog in which this piece of masterpiece appears. But one look at this amazing Baymax cake and you would think otherwise. A very cute birthday cake baked to perfection for a 6 year old with our dear Baymax playing the central character. His very existence is to make others happy and that idea is put forth in this incrediby cute Baymax cake where he is seen holding up a cheery birthday message for the person in question.

Baymax enjoying a game in the sugary sweetness of a red velvet cupcake. A beautiful cake designed by Dliche with eyecatching colours.

Whoever said that Big Hero 6 birthday cakes should be limited only to children? Here's an absolutely fantastic idea on how to celebrate a loved one's 60th birthday - that's right, by baking them or ordering a customized Big Hero 6(0) birthday cake. Such a cake would be apt for someone who's young at hero, who believes age is just a case of mind over matter - if you don't mind, it doesn't matter.

A simple and cute Baymax cake and cupcake - a really yummylicious combo!

If you know how to bake a cake and cupcake but do not want to spend too much time in making a Big Hero 6 themed birthday cake, you can always use edible images or cake toppers to do the job for you. Just place them on the cake - and you are all set!

You can use figure cake toppers as the one given below to add a professional touch to your kid's (or adult's) birthday cake. This particular set includes 12 pieces with figurines representing all the main characters like Hiro, Baymax, Wasabi, Fred. Comes with a bonus avenger's temporary tattoo so that's an icing on the cake. The first set of 6 includes characters in their superhero versions whereas the rest of the 6 displays them in their street avatars.

If you prefer to have edible images instead of cake toppers, here's a popular one available on Amazon: 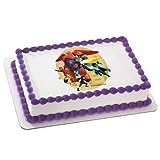