Lord of the Rings Costume Ideas: DIY and Store Bought

Ideas for a Lord of the Rings Themed Halloween Costume

I tried to limit this article to five ideas, but there are so many interesting characters in the Lord of the Rings trilogy, you'll find much more than five ideas below. Below, you'll find many ideas for...

If you are a Tolkien fan, you probably read The Lord of the Rings before you saw the movie, or maybe it was the other way around, but that doesn't matter. But if you have seen the movie and read the book, you have many more facts and details in mind to help you recreate your costume. The Lord of the Rings gives us three volumes or series to choose a character from:

Which Tolkien Character Will You Choose?

If you want to be a hobbit as a costume, there are several to choose from: Bilbo Baggins, Frodo Baggins, Samwise "Sam" Gamgee, Meriadoc "Merry" Brandybuck, and Peregrin "Pippin" Took.

Or choose one of their allies: The Ranger, Aragorn, Boromir, the Dwarf, Gimli, the Elven prince, Legolas, or the wizard Gandalf the Grey or Gandalf the White.

There are some beautiful women's costume ideas too: daughter of Elrond, Arwen Undomiel the elven woman who loves and has sworn herself to Aragorn, or the beautiful Lady Galadriel, grandmother of Arwen Undomiel, sometimes called the Lady of Light.

The antagonists also make for wonderful Halloween costume ideas: How about wearing a Ringwraith costume or going as the Witch-king?

It doesn't seem to matter how much time has passed since the movies were released. The Lord of the Rings is a timeless story and these costume ideas will be around for a long time to come. Similar to Star Trek, Star Wars and other classic fantasy costume themes, these outfits are always going to be in style, you'll probably wear it year after year, so it makes sense to spend the extra time and money to make your costume perfect. You can make your entire costume yourself, you can buy a ready-made, or you can mix homemade with store-bought.

You'll find many specific ideas and suggestions below.

An Aragorn costume is one of the most popular. Aragorn is the strongest warrior, heir to the thrones of Arnor and Gondor, and a key player in the entire Lord of the Rings trilogy and the saving of Frodo Baggins. Aragorn is also in love with Elven Arwen Undomiel and eventually ends up marrying her. How romantic! The character is played by Viggo Mortensen in the movie. The hobbits in the book and movie call Aragorn by the name Strider. By the end of the movie he has yet another name, when he is crowned king he is known as King Elessar Telcontar.

What You Need for an Aragorn Costume

The Hair. Aragorn has brown hair and a bit of a five o'clock shadow, and looks very good with it!

The Clothes. His costume is rather knight-like. It's a suede tunic with some armor (chain mail) or a breastplate, a leather cape, and black gloves. He wears dark pants (probably made of leather) and big, strappy, bulky boots.

The Props. His weapon is a sword. He sometimes wears a crown.

The Look. He's usually wearing several layers and looks like he has just walked off of a smoky, bloody, muddy battlefield. He has a rugged appearance, but what would you expect from someone who is very busy saving the world?

Dress Up as Arwen, the Elf: What You Will Need

Arwen Undomiel, daughter of Elrond the Elf and betrothed of Aragorn: In the last movie, they finally do marry. Arwen always looks regal, beautiful, and feminine, even when she's riding on horseback with Frodo Baggins. She rescues him by reciting an Elven incantation which causes a flood and prevents the Black Riders from reaching him. For the woman who is looking for a classic costume, Arwen is a great choice.

Arwen always look regal, beautiful, and feminine, even when she is riding on horseback. The character of Arwen is played by Liv Tyler in the films.

There are several different looks you can put together when you decide to dress up like Arwen. Her hair is long and dark and usually loose in sections around her face. You can create her rugged look with a long flowing skirt, a blousey blouse and a vest. The blouse should have bell sleeves. Sometimes she's wearing a loose-fitted velvet hood. She's almost always wearing a tiara of some kind. 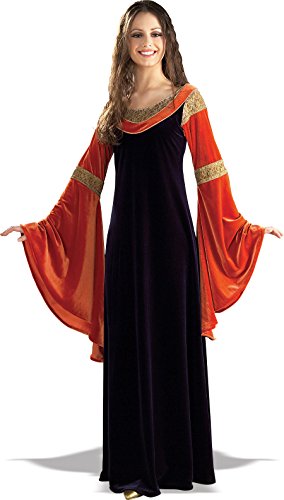 Dress up as beautiful Arwen for Halloween this year, it's the perfect outfit for a princess who loves The Lord of the Rings.

Legolas is an Elf, a prince, and one of the nine men who form the Fellowship of the Ring. Since Elves don't age the way humans do, Legolas is about 139 years old, but still looks like a very young man. He is strong, quick, great with a bow, and brave, plus he never seems to tire while in battle. There is a conflict between Legolas and the Dwarf, Gimli, during the film, but that rift mends itself as the two gain respect for each other during the perilous journey they embark on by joining the Fellowship of the Ring.

Legolas was played by Orlando Bloom. Several times during the filming of The Lord of the Rings, Bloom's contact lenses were forgotten, so at different places during the movie, Legolas's eyes are different colors.

To make a homemade costume of Legolas you will need a tunic, a cloak, a quiver of arrows, and a bow. He always wears an armguard to protect his shooting arm from the bowstring. A long blonde wig and a pair of Elven ears will also help create the look. 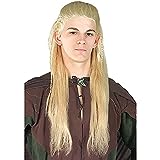 Gandalf the Grey or Gandolf the White?

If you are thinking of a Gandalf the Wizard costume from The Lord of the Rings, you have two choices: Gandalf the Grey or Gandalf the White. Either is a fun costume idea and Gandalf is an easy homemade costume to whip up yourself. Since he is always wearing a wizard's cape and carries a staff, it reminds me of the old adage, "walk softly and carry a big stick," but in Gandalf's case, it's a magical stick.

You will also need a long beard and wig: in grey for Gandalf the Grey and in white for Gandalf the White. His clothes are always rather plain and made of rough-looking material (almost blanket-like). The character was played by Sir Ian McKellen.

None of the hobbits (except Bilbo) had ever left their home in the Shire before. Sam was told by Gandalf to watch over Frodo and he took that role very seriously. At any time on the journey, Sam would have died for Frodo. He is a loyal friend. Sam and Frodo have a wonderful friendship and trust that helps them throughout the hazardous journey. Merry and Pip turn out to be very brave and trustworthy companions, as well. The hobbits are a loving and warm group of friends, and they are an easy costume to make at home.

Elijah Wood played Frodo Baggins, Sean Astin played Samwise "Sam" Gamgee, Billy Boyd was Peregrin "Pippin" Took, and the role of Meriadoc "Merry" Brandybuck was played by Dominic Monaghan. To make your own Frodo, Sam, Merry, or Pip costume, you can use some of the old clothing you probably have at home. The hobbits all wore cloaks and ragged-edged pants. They wore a kind of leather armor on their chests and their wrists at the end of the film, but in the beginning they wore simple, non-fighting clothes.

What a Hobbit Wears

With the release of The Hobbit movie, there are many more costume ideas available for anyone who wants to dress in this humble but inspiring costume. Things to consider:

The Ringwraith costume is another fun costume idea for fans. It's a simple costume to make yourself, so if you wanted to design your own, this is probably one of the easiest outfits to make. These black riders wore a hooded, ragged robe and had steely-looking claw-likehands but you can just add some black gloves to create a scary look and wear some black shoes. Their weapon of choice was a sword.

These black riders were once human kings who fell under the evil power of the ring. Now they are mindless killers who only search for the ring. They are deadly, evil, and ugly. In other words, they make a great Halloween costume!

You can top your dark, hooded robe with some black gauze. Give it a spooky effect my making it a bit tattered. We can never see the Ringwraiths' faces: the ready-made costume has a mesh mask, but you can make your own out of some black net material.

The Witch King of Angemar or the Black Captain

The Witch King of Angemar

The Witch King (aka the Black Captain) is one of the movie's greatest antagonists, serving a the lord of the Ringwraiths.This character doesn't get a lot of camera time, but his evil personality makes him unforgettable. In The Return of the King, the Witch King is killed by the hobbit Meriadoc "Merry" Brandybuck and Ãowyn.

The Witch King costume is all black. He wears armor, a crown, a cloak, and a helmet that extends down to cover the face.

You too can dress up as this nasty little character and search for "My Precious." Wear a Gollum mask or re-create the look with some makeup. Pin a sign to your outfit asking if anyone has My Precious, and most people will know exactly what your costume is.

"My Precious" is the most popular catchphrase from the movies, and as you know, it refers to the Ring of Power. I can hear Gollum saying it in his screechy little voice as I write these words. It's almost a growl, and that gives you an idea of how inhuman this creature has become under the evil influence of the Ring.

This mask and some dark ragged clothing will make Gollum come to life on Halloween. Or if you want to make your own costume, here are some things to consider:

The most interesting things about Gollum are his split personality (Gollum vs. Smeagol) and the way he talks and walks: You'll probably want to study some video clips before you go out Halloween night!

The Lady of Light

Here's the Lady Galadriel (Lady of Light). She's all white: A long white dress, a white cloak, and long white hair. Her headpiece comes to a point on her forehead. If you don't have the long blonde hair, a wig that will do just fine.

The Voice of Galadriel