Good Wishes Can be Resolutions to Keep

Many of us no longer want anything for birthdays and Christmas, the whole gift giving phenomenon having become overly commercial, empty of meaning.

Increasing numbers of people give to charities and special projects at holiday time. Some people even prefer no flowers at their funerals and ask that the money for flowers be donated to a good cause.

It is enough these days in the 21st Century to have freedom, a warm place to live, enough food to eat, reliable transportation, and some good friends. Gifts can be nice, but shopping and exchanging can be time consuming and annoying. In addition, some folks are not good at choosing gifts and hard feelings may result. If I could not have freedom first, the gifts would not impact me very much. How about you? Happy where I am,

A visit to the International Space Station. Today, this can be down via webTV with the help of NASA on their comprehensive website. In addition, each astronaut that travels to the ISS has a Twitter account with which to communicate to people on Earth. They send a lot of beautiful pictures and videos from outer space.

In May 2013, Planetary Resources, Inc. raised funds rapidly for launching telescopes into space for Citizen Scientists - that's you and me! Teachers, students, and the general public will be able to see what those telescopes see.

Paul Allen and his team at the Science Fiction Hall of Fame and his aerospace industries in Washington are working on bringing the cost of actual space travel down for us, and so is Sir Richard Branson of Virgin Gallactic. Privatized space flight as a business booked rides as early as 2011, and Google-backed Planetary Resources broke into the asteroid mining business in 2012. In 2013, we have time sharing for telescopes.

Some individuals might still like a trip to Space Camp for a week. Specialized programs to help those that cannot quite afford a week-long project there are available through the kindness of donations to the organization.

Exploring the universe, even from one's laptop, can be something to look forward to tomorrow. It will give many people a lift.

Mars One and Other Expeditions

Mars expeditions are readying to leave for our neighboring planet anytime between 2018 and 2035. These are both privately funded and government funded projects from around the world. NASA has a whole class of astronauts ready and Mars One is a project making good progress in the Netherlands.

A very good trip for rest and relaxation can do wonders for a person that is frayed by daily life. That is a welcomed gift. A one week a Retreat at the Abbey of Gethsemane in Kentucky can change lives.

Quiet and relaxing, this retreat location in Kentucky provides time for one to digest life up to that point, refuel, and continue the journey forward. We all could use some time for that, some quiet time alone, and some time pulled out of the busy world. One business man traveled to the Abbey for a short stay, just a weekend, and lingered an entire year before returning to his business. He delegated his work to trusted colleagues, checked up on the business from time to time and was a changed man at the end of the year. He was refreshed with a new viewpoint toward work and life.

We might be able to give someone we know a day of that type of refreshment. If we cannot afford to send them on a trip or to a day at a local spa, we might babysit so that they can have a day to themselves.

Abbey of Gethsemane in Kentucky 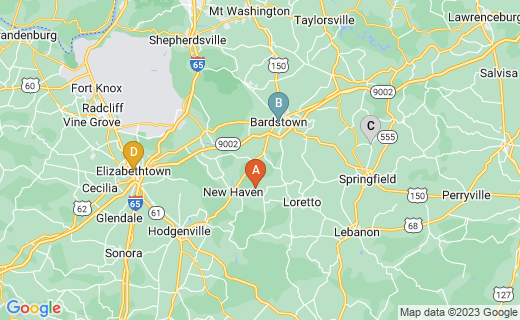 The National Museum of the American Indian used to be just one long hallway at the Smithsonian, but it now fills a large building of its on on the Mall in DC. The Air and Space Museum and its annex in Virginia could take three days to enjoy.

The African American Museum has been renovated and the National Zoo has its new walk-though bird cage completed. I remember a past trip to the cage in which a bird of paradise sat next to me as I stood by a tree. The National Arboretum is home to a tremendous Bonsai installation that many people will enjoy. On an April trip, visitors will see the Cherry Blossoms Festival around the Tidal Basin nearby the Mall.

If you cannot travel to DC, you might take a friend or neighbor to museums in your own locale. You might know someone that needs a day out.

A side-by-side Hebrew/Greek/Aramaic and English version of the Bible with the literal English translations and the historical context presented is perfect for students of scriptures.I found one on eBay very reasonably priced and have had a very enjoyable tie with it.

For example, the King James Version of the Bible (actually King James himself, an extremely distant cousin of mine) changed the English meaning of th word helpmeet/helpmate to mean servant. It did not mean servant before this. The original English meaning of the Hebrew word is defender: Eve was to be Adam's helper and the word help is the same word as in the passage "My help comes from the Lord." This help is powerful and all-conquering and does not come from a clerk or a maid; a wife defended the husband that also honored her, and together they could not be defeated.

Another example is turning the other cheek. During the historical period of the passage, if a man hit you and you turned your head, his natural next move would be to backhand you with the same hand. If he did this, he brought dishonor, shame and embarrassment to himself and onlookers would degrade him and shun him.He could not do any business in town.

We can learn much with the proper tools. The Beauty of Fans

A new set of Hawaiian, Japanese, Chinese, or Korean fighting fans does not need to be used for fighting. They can be hung on the walls of your living space to make interesting and attractive conversation pieces. They have been used for many generation in traditional dances as well as for self defense.

Handcrafting According to Tradition

A new supply of yarn with which to make more hats for the needy infants and children at Children's Hospital and Ronald McDonald House.

Here's my Miss America wish ("I want world peace..."): I want an end to abuse of all kinds in America.

In revisiting the founding of America/USA for a series of Hubs on US History, I recognized the abusive control tactics of the British Crown of that day, exerted to control the Colonists. This is not a criticism of England today, but of the colonial system as it was up to 1775, especially with it's ban on Christmas, right down to the mince pies!

If you control something too much, you control it right out of existence. England lost the American Colonies, although it tried to regain them in 1812 - 1814 - unsuccessfully. I've seen many businesses go out of business because of over control and many families spit up.

The precedent for abuse in this country is clear, I think that clarity gives us a chance to put clear remedies into place now, beginning with education and ensuring that our residents in USA have adequate food, shelter, clothing, transportation, and health care. We need to stop the unnecessary waste of resources and ensure that everyone can find enough useful, rewarding work.