(This is the second part of a multi-part series. The first part can be read here: Australia Part I )

Our vacation of a lifetime began with an exciting 7-day land-tour of Australia. The adventure included a trek through the Outback and snorkeling on the Great Barrier Reef. The second part of our trip was a 12-day cruise of Australia and New Zealand on the Diamond Princess. We covered a lot of ground during the land portion of the tour and we were looking forward to a relaxing sea voyage.

Don't get me wrong, touring the Outback was a fantastic experience, but once we boarded the ship, we were able to put away our bug nets, straw hats, and water bottles and enjoy a more leisurely pace. Outback first, luxury liner second is definitely the way to go. We boarded the Diamond Princess in Sydney and left port just as the sun was beginning to set. From our balcony, we had a wonderful view as the great ship sailed past the iconic Sydney Opera House and out to the open sea. 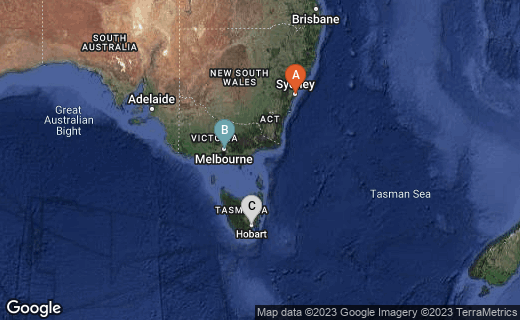 What time is the midnight buffet?

We signed up for the traditional dining plan - the same table at the same restaurant at the same time every night. Doing a little research on the Internet, I discovered that they offer a less formal, free-style dining plan similar to the way Norwegian Cruise Lines does it. They require 24 hour notice to change the plans, so I figured we would go the traditional route the first night and tell them to switch us to the less formal plan going forward. Our dining experience at the reserved table turned out to be so enjoyable, that we never did change our plan. Knowing when and where you're going to eat every night eliminates the daily "Where do you want to eat?" discussions, especially if you're with a group. We had the same waitstaff each night and they knew what we liked and were able to make recommendations accordingly.

The Diamond Princess, like most modern cruise ships, is a beautiful place to relax. I found the food to be a few steps above Norwegian Cruise Lines. Breakfast in the restaurants and at the buffets is standard fare, but I found lunch to be very interesting. In the pool area near the giant TV screen, pizza was served from 11am to 11pm. I'm from New York and I know pizza. This was very good pizza. Amazingly good pizza. They always had three choices; margarita, pepperoni, and a third type that varied each day. In the same vicinity, a stand turned out decent hamburgers and hotdogs. A few yards away, a buffet served a different ethnic food each day. Greek, Mexican, Chinese, Japanese, Italian, and more. This is in addition to the standard buffet and restaurant lunches available throughout the ship.

The shops are nice but I think Princess Line is missing a business opportunity. On NCL, they restock the gift shops with merchandise from each port of call. I was with a group of women who were dying to spend money, but the offerings never changed during the cruise.

We found the stateroom to be laid out nicely and the bed to be surprisingly comfortable. Each cabin has Internet access available, some via WiFi, some via cable. The rates for Internet use are not cheap, but the in-room access is convenient. There are computers available in the Internet Lounge if you don't bring a laptop. The rates are the same whether you use the ship's PC's or your own. If you want to update your Facebook page with pictures of your cruise, it's far more economical to wait until you're in port. Most cities have cafes and shops where you can buy 30 minutes of Internet access inexpensively. In Australia, stores of the popular supermarket chain Woolworths, usually have Internet-enabled PC's available for use by the hour for as little as $5.00.

There seemed to be pools everywhere. I think I was still discovering new ones on the last day of the cruise. And wherever there's a pool, there's a bar. There was live entertainment nightly in many of the lounges, as well as in the theaters. I found the talent level in the theater productions to be a little bit above community theater, but nevertheless enjoyable. The lounge entertainment was about what you would expect at the bar of a Holiday Inn. If you're not into live entertainment, you can watch a movie at "Movies Under the Stars", an outdoor movie theater complete with lounge chairs, blankets, pillows, and hot popcorn.

Our Melbourne excursion included a trip to a wildlife park and a few hours in a replica 1850's gold mining town. The mining town was interesting - kind of like a Wild West movie set, but my favorite part of Melbourne was a trip to the Ballarat Wild Life Park.

One of the Australia's greatest assets is its diverse wildlife, so a trip to see kangaroos, koalas, and Tasmanian devils is a must-do part of any trip to Australia. Once inside the park, you are up to your ears in friendly, lovable kangaroos. The little ones often stick their faces in shopping bags to check for goodies. They love to be petted and are quite tame. I'm guessing that this isn't the case with wild kangaroos, but you'll probably never run into one, so I wouldn't worry about it.

Koala's on the other hand are very dangerous! (just kidding) A park guide will allow you to pet a koala and have your picture taken, but they are not allowed to let visitors hold them. It's still a very pleasant experience seeing these cuddly creatures up close.

I don't know why, but I was most taken with Tasmanian Devils. They're little beasts that look like a cross between a pig and a bear (maybe that's why they're so mean) and have a rather viscous temperament. Sadly, they're endangered due to a disease that's spreading very quickly among them. Great effort is being taken to isolate the healthy ones and send them to zoos and farms away from Tasmania until a cure can be found. The little guy in this picture may be angry, but at least he and his friends are safe. Here's a tip: Don't try to pet a Tasmanian Devil. Ask me how I know.

Wombats, Ostriches, Emus, and various other critters that look like someone's idea of a joke, can be seen in the park as well.

After a full day at sea to relax and enjoy the ship, we arrived at Hobart, Tasmania. Tasmania is a large Australian island-state that is 150 miles to the south of the mainland. Hobart, one of Australia's largest seaports, lies on the southern end of the island, and is the most populous city in Tasmania.

We had booked an excursion to a wildlife park in Tasmania, but that would have been our third one in less than a week, so we decided to cancel. Instead, we took a bus for a 45 minute city tour and then went to a restaurant for lunch. Hobart is noted for its seafood and there are many open-air restaurants on the water. We chose one and had a very nice meal. Most of us had the fisherman's basket of various fried fish and shellfish. Interestingly, they charge extra for tartar sauce. It was only a dollar, but it seemed strange. It was nice to just sit with a cold beer and enjoy the scenic view of harbor.

After lunch, we boarded the ship for our voyage to New Zealand. I have to say that I was a little sad to be leaving Australia, knowing that I'll probably never return. Australia is such an interesting place and I know I that we just barely scratched the surface. There is so much more I'd like to see. Never say never, right?

From Hobart, we enjoyed three days at sea on the way to New Zealand. I love days at sea - no early morning wake-up calls, no debarking for excursions, just free time to do what ever you like. For me that usually included Texas Hold'em Poker. The ship's casino is a decent size and includes craps, blackjack, roulette, slot machines, and other assorted table games. The poker table is electronic, so there are no dealers. The players sit around a normal looking poker table that has a TV screen built into the middle of the table. There are also small touch-screen monitors in front of each player. Players buy credits at the cage which are put onto his passenger card. All betting action is via the touch screen. The pace is pretty fast because the "cards" are dealt and shuffled electronically. The feel is more like real poker than online poker because the players are all sitting around the table, not at terminals on the Internet. Unfortunately the Poker Gods were not with me on the trip and my losing streak lasted throughout the voyage.