Best Costumes for Women for Halloween (And Other Occasions)

Sexy Costumes for Halloween and More!

Halloween is one of those holidays that is just plain fun. It's a time when you can just cut loose, and a lot of people do - releasing their inner child and playing "dress up" to a certain extent. That being the case, finding the right costume can sometimes seem like a matter of national security.

However, you don't have to limit yourself to just Halloween when it comes to wearing costumes - especially if you're a woman. You can find great utility for a number of outfits on a year-round basis if you just put your mind to it. That said, below are some great costume ideas that you might find a use for on Halloween (as well as a few other occasions).

If you've ever wanted to make an immediate impression at a Halloween party, the Princess Leia Love Slave costume is the way to do it. (Okay, it admittedly is just a "slave" costume, but I thought "love slave" added just a pinch of pizzazz.)

Instantly recognizable, this costume is a sure-fire crowd pleaser in any setting.

Some costumes are a little bit obscure. You have to guess at their meaning or what they represent. Sometimes they simply fade from popular culture, such that the meaning - or character - they represent is lost upon anyone viewing them.

That's far from the case when your costume is derived from the biggest blockbuster film of all time. (We're talking about a movie that grossed billions - and that's "billions" with "b.")

The Avatar Neytiri costume is an exotically beautiful design that will turn heads in all settings. (Not to mention being a sight that no one is likely to forget!)

For the better part of two generations, no one has worn a Star Fleet uniform better than Lt. Uhura.

Now your Halloween costume can consist of the same head-turning ensemble that made the original Lt. Uhura a sex symbol.

You know, you can never go wrong with the classics.

This French maid outfit is an ever-popular costume selection that everyone recognizes.

And of course every Catholic boy's dream, the Naughty Nun, never goes out of style

(And if you need a good laugh, check out the Dannon Yogurt French Maid commercial below.) 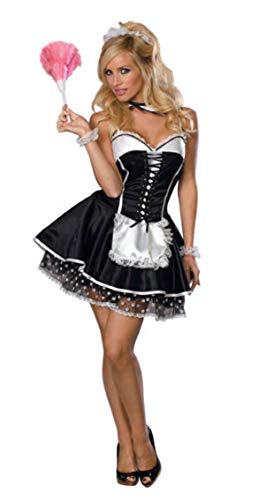 The entire country was undergoing a cultural evolution and revolution that would change the nation forever.

These costumes harken back to those times and the metamorphosis that we went through as a society.

With that in mind, you'll have a groovy time in whichever one of these costumes you choose.

Summary of the Best Costumes for Women

In short, there are obviously a lot of great costumes out there to choose from. Hopefully something here was suitable to your taste and temperament.

And remember, costumes just aren't for Halloween any more, so find a reason to wear them more than just once per year.

And, on the off chance that you're shopping for someone in addition to yourself, you might be interested in the following: