What Are the Best Gifts for a Six-Year-Old Girl?

Shopping for any kid is hard, but one as young as six can be even more difficult. Her tastes can change even faster than a teenager's, and what was fun just a week ago is now "too babyish" for a big girl like her! Whatever the occasion, this hand-selected, tried-and-true list will help you get her just the right thing.

This list contains some of the hottest new toys as well as some of the most-asked-for gifts among the six-year-olds I know.

One of the Best Toys Of the Year 2015 for Girls

Ever since the first commercial for Flutterbye Flying Fairy hit the TV, girls everywhere have been crying to have one of their own and it's not hard to understand why: these fairies are beyond awesome.

While boys had their flying toys for ages it was about time girls got something magical! And Flutterbye Flying Fairy really does seem like magic! It glides through the sky while you control its movement with your hands.

You will need some time to get the hang on how to control the fairy, so do take your time to help your kid out as there will inevitably be some crashes while they get the hang of it. (Don't worry, though, the fairy is pretty sturdy so even if it crashes a bunch it won't break.)

Once you get the hang of controlling the fairy, then the magic really begins! Kids just love playing with her - both in her doll form and as a flying fairy - and they will be eagerly anticipating for the doll to charge so they can give it another go. Check out the review below to see more.

Get Creative With Your Six-Year-Old: The Best Creative Gift of the Year

Crayola's Marker Maker is the best creative gift this year! It's fun, it's creative and girls (and boys) are crazy about it.

At this age kids are really into coloring and drawing and this product lets them take their favourite activity to a whole new level by giving them a chance to create their own markers with their own shades and colors. The kit comes with enough materials to make 16 markers, and includes the nib, the ink tube, the cap, and the end-cap. It also comes with three ink bottles of red, blue, and yellow so you can mix and match the colors into different shades.

Not only is it super fun to make the markers, but it's also a great way to teach kids about how colors work: how yellow and blue make green and how red and yellow make orange. The best part is getting to name the weird colors she'll come up with.

One caveat: you may not want to let your six-year-old pour the ink into the markers herself. You'll probably want to do it yourself or at the very least supervise the process so as to avoid making a big inky mess. 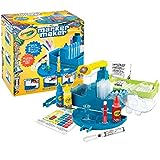 There always seem to be a million dolls released every year, but there are two that really stand out and are a must-have item for any little girl:

Girls Should Play With Legos

Giving a six-year-old Legos for her birthday or for Christmas is a gift to her creativity and imagination. A set of Legos can keep a child occupied for hours and hours as they construct and play in elaborate worlds of their own making. I loved Legos as a kid and I'm going to bet that you did too!

There are any number of Lego sets that you can buy, but if you want to get her something a bit more girly, there's now a whole line of Lego sets just for girls! I promise it's not all pink - it just uses slightly brighter colors and it's wholly compatible with all your other Lego sets too. "Lego Friends" allows for the same amount of creativity as any other Lego line but with girls in mind - the colors are more girly, figurines are less robust and sets have a more feminine note to them.

Six-Year-Old Girls Are Crazy About This Toy: The Polka Dot Furby Boom

This cute little fur ball is taking over hearts all over the world. Furby Boom is an upgrade to last years "regular" Furby, and it's not only the colors that got upgraded.

If you don't know, Furbies are interactive plush toys that respond to music, movement, and voice. It's also like a virtual pet: you can take care of it, feed it, and monitor its vital statistics.

The new version, Furby Boom, offers even more. It can connect to your Android or iPhone/iPad through apps that do funny things like let you see it sing in the shower or tell you which foods it likes and doesn't like. With these new editions, it can become so much more than just your regular electronic toy! You can play games with it, take care of it as you would a virtual pet and even have little virtual baby Furbies! Now ain't that cute? 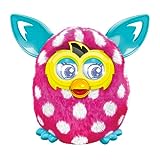 This is our favourite FurReal Friend ever! It's adorable!

It's another interactive, electronic toy that kids just love playing with. There are sensors on the back and one paw which when activated causes the FurReal Friend to do a bunch of cat-like movements: stretching, pawing, and back arching. The "Meows" are super cute: they sound almost like a real cat. This is an especially good gift for kids who may not understand that real cats don't always want to play!

Check out the video below! 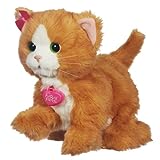 Fun Experiences: Spend the Day Together

For kids at this age, often there is nothing more they would like than to spend a whole day doing something fun with an adult. There's no better gift than an adult's undivided attention! There are so many things you can do together and experiences you can share that she will remember for years to come.