As a fan of The Hunger Games Trilogy myself, I've given a lot of thought to the types of interesting things that I'd love to give as gifts to my fellow Hunger Games Fans.

This page is full of my ideas for things which, were I a young fan myself, I would love to receive. Always remember to take into consideration the things about the series that means the most to the person you're shopping for and to play to those elements of the series.

You'll find everything that you need here to find the perfect gift for your favorite fan of the series, whether she aspires to be more like Katniss, wants to learn more about the politics of the Games, loves reading Dystopian fiction, or just enjoyed the movies.

Please feel free to add your suggestions to the comments at the end!

For those who have not read The Hunger Games, this page does contain spoilers!

Shopping for a Fan of the Hunger Games Books? Try Dystopian Fiction!

Now that all four movies have hit the theaters (and that most fans have seen them), The Hunger Games fandom falls into three categories: People who loved the books, people who loved the movies, and people who loved both. If the person you're shopping for is a reader, then you could consider purchasing other Dystopian novels as gifts for the fan on your list.

The series is considered young adult fiction and so you may wish to consider that the reader you're buying a gift for will enjoy other young adult fiction. At the top of my recommendations for fans of The Hunger Games is Veronica Roth's series Divergent (see to the right).

Other popular young adult dystopian series you can look for on Amazon include:

Books always make great gifts for readers, but the key is to try to find something that the person you're buying for is going to actually enjoy. The nice thing about shopping for someone who is a fan of a particular series is that you're able to choose a book or series that is related to the book or series they're a fan of!

Of the books listed above, my favorite is the Divergent series. While it cannot in my mind compare with The Hunger Games, Tris is an amazing, strong heroine who Hunger Games fans should easily fall in love with (not to mention how great Four is. He's my favorite book boyfriend!

What part of the series made you a fan?

Look for a recurve bow and equipment to help a teen Hunger Games fan to be more like Katniss Everdeen. Learning archery may help to improve balance, stability, upper body strength, coordination and posture!

Shopping for a Girl Who Idolizes Katniss? Consider a Recurve Bow

This gift for a Hunger Games Fan is recommended only for older teens.

Throughout the series, Katniss uses her bow and arrows to defend herself and to hunt for food for herself and her family. It's brought new interest to the sport of archery for many young fans of the novels and movies, and if the fan in your life has shown a genuine interest in archery, you should encourage her!

In many ways Katniss is not the strongest female character in young adult fiction, her fierce loyalty to her sister and to Peeta are to be admired, and you could do worse than encouraging a girl to possess traits like Katniss Everdeen.

The most authentic bow is going to be a recurve bow. You're not looking for a crossbow or a compound bow if you want to encourage the fan in your life to be more like Katniss.

Look for something that has good reviews and is sturdy, particularly if the recipient of your gift is going to actually be using the bow, but also bear in mind that this is a weapon, and can cause injury in the wrong hands. This gift is suitable only for mature fans with a sincere interest in archery or in collectible items.

Shopping for a Girl Who Likes Jewelry? Try a Locket like Peeta's Medallion from Catching Fire

In Catching Fire, each of Team Twelve had a special token to represent them as a team. Going into the 75th Hunger games, the team knew that only Peeta or Katniss could make it out this time. There wasn't going to be a dual victory a second time. The Capitol wouldn't allow it!

Peeta's token was a small medallion which he would later give to Katniss on the beach in the arena. It opened up like a locket to reveal three photographs inside: One of Katniss's little sister, Prim, one of her best friend, Gail, and one of her mother.

The locket meant to remind her that she had so much to live for, and that she had to make it back to District Twelve, thus sacrificing Peeta to save herself. It was one of the most profound declarations of one character's love for another that I've read in young adult fiction, and Hunger Games fans who enjoy jewelry or are romantic at heart will no doubt love a replica of the medallion.

These come from a number of sellers at different price points, and if you're looking for something small and affordable, but still collectible, the replica medallion is a good choice. The one shown to the right fits right into my budget!

What is Your Hunger Games Fan Interested in Getting as a Gift? 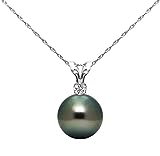 Girls will love a beautiful black pearl necklace, like the pearl that Peeta gave to Katniss in Catching Fire. This is a high-quality pearl with a beautiful chain and diamond. This is a CULTURED pearl -- that is to say that it was created in a lab, not in the ocean.

Romantic Hunger Games Fan? Maybe Consider a Tahitian Pearl, like the One Peeta gave Katniss on the Beach

Also in Catching Fire, the allies gather food from the water thanks to Finnick's amazing fishing skills. Peeta finds a pearl inside of an oyster and gives it to Katniss. This becomes a symbol of hope for her throughout Mockingjay while Peeta is suffering under the trackerjacker venom.

The pearl shown in the movie is called a Tahitian, or "black" pearl because of its dark color. These are considered particularly rare (coming from someone who has worked in fine jewelry) and they make beautiful jewelry for girls who enjoy the romance of the stories, or even those who need something to symbolize that sometimes from the smallest of dreams comes something big.

You Can't go Wrong with the Series!

If you're buying for someone who loves The Hunger Games, you cannot go wrong by purchasing the

hardcover boxed set, or the series of three DVDs which are currently available for purchase on Amazon. I'd love to have a copy of all three books in hardcover, so unless the fan you're shopping for already has them, this will make a great gift. Please consider it.