See this unique collection of the best Thanksgiving poems for the holiday, with text on printable custom graphics for each one. Here, you will find classical and new poems.

Giving thanks to God has been a favorite theme of religious poets long before there was a Thanksgiving holiday in America or Canada. Thanksgiving poems written in gratitude for God's blessings are found in most early civilizations.

Thanksgiving Day was first celebrated in North America in 1619 by English pilgrims who had settled in what is now the state of Virginia. Captain John Woodleaf declared that the special day

"shall be yearly and perpetually kept holy as a day of thanksgiving to Almighty God."

Originally, no festive meal was involved; it was a prayer service.

Here is a special collection of the classical and the new Thanksgiving holiday poetry. Each selection is displayed on a colorful picture, appropriate for the holiday. (You may use these graphics for your personal use, but you may not put them on a website except for Pinterest.) Just 'right click' to easily save your favorites and print them from your computer.

Some of the earliest poems of thanksgiving are found in the Bible in the book of Psalms. In fact, the holiday is named for Psalm 100 which is titled A Psalm of Thanksgiving in the earliest extant Hebrew scroll.

Now thank we all our God is a poem by Martin Rinkart (1586 – 1649) and it was originally written in German. It was based on the Jewish text Ben Sira, written in Jerusalem in approximately 175 BCE by Shimon ben Yeshua ben Eliezer ben Sira.

In the early 19th century, the poem was translated into English by Catherine Winkworth and it quickly became a familiar hymn in Christian churches. Today, it endures as one of the favorite Thanksgiving poems. 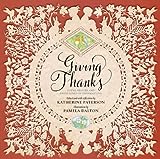 Giving Thanks: Poems, Prayers, and Praise Songs of Thanksgiving

This is an amazing collection to enjoy any day of the year and a great gift idea for your hostess.

Another British hymn which found a new home in America is We Plough the Fields and Scatter by Matthias Claudius. Claudius was German and the poem was first published in the German language in 1782. In 1861, it was translated into English by Jane Montgomery Camp­bell.

Set to music, the poem became a popular church hymn to give thanks to God for a bountiful harvest. Church-goers soon brought the hymn to America where it also found favor for religious services. When Thanksgiving was declared an official national holiday by President Abraham Lincoln in 1863, the Claudius poem became a Thanksgiving Day hymn.

The words of this poem have so captivated the human spirit, that each generation finds them to be a source of inspiration.

In 1971 the poem was put to new music by Stephen Schwartz and used in the award-winning musical Godspell. The song, titled All Good Gifts, from the 2011-2012 Broadway revival of the musical is in the video below.

Come, Ye Thankful People, Come was written by Englishman Henry Alford in 1844. It was a poem of gratitude to God for the autumn harvest. It gained popularity when it was put to the tune of an old folk song.

The poem became a church hymn in England and immigrants soon transported it to America where it also found a new home as a hymn for the Thanksgiving holiday.

A modern American choir sings this old hymn in the video below:

Ralph Waldo Emerson (1803 – 1882) was an American intellectual and poet who wrote on social and religious themes. He is one of the most loved American poets.

The poem below is titled Thanksgiving Prayer.

Lydia Maria Child published the most famous Thanksgiving poem for kids in 1844.Over the River and Through the Woods recounts the poet's childhood memories of visiting her grandparent's house in Medford, Massachusetts, for the holiday. Today, the house is known as The Curtis House and it is listed on the National Register of Historic Places. It sits near the Mystic River, which is the river the poet traveled over to reach the home.

In the early 1900s, Americans began to produce greeting cards for the holiday. Many of these cards contained poetry which was republished frequently in newspaper advertisements every November. Some of these verses became favorites and found their way into children's classrooms.

This is a short verse which was found on a vintage greeting card:

What We Are Thankful For

For wealth and plenty in the land,

For faith in God's sustaining hand,

For every blessing great and small

We thank the giver of it all. 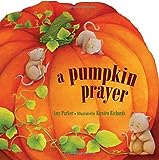 A Pumpkin Prayer (Time to Pray)

"Orange piles of leaves to crunch

and yummy pumpkin pie to munch!",

so begins this delightful book by bestselling children's author Amy Parker. Click to look inside this big board book for kids.

This rhyming couplet is on a vintage greeting card from the turn of the last century.

With grateful, happy hearts we sing

Thanksgiving praises to our King.

This simple verse was popular in the early 1900s in America.

On this Happy Feast Day,

From our lips shall come

Hearty thanks for all things,

Here's one for very young children. Thank You, God is a favorite nursery rhyme which children learn for the holiday, but it is also used in some families as a daily prayer.

Little ones quickly learn the words to this poem when they hear it as a song, as in the video below.

This oversized board book is full of colorful pictures and rhyming text. A delightful treat for little ones to enjoy while the turkey is roasting.

Born in 1894, Edward Estlin Cummings became a popular American poet who published his poetry under the name e. e. cummings. His poetry broke all the rules of capitalization and punctuation, and was in direct contrast to his prose work for newspapers and magazines.

His poem, i thank You God, is a celebration of life, the beauty of the earth, and of gratitude to the Creator.

Here is another modern one for the holiday:

On this Thanksgiving Day
We bow our heads to say,

We thank You with deep gratitude
For home and health and food.

For all our friends and family,
We give our thanks to Thee.

Your blessings fall like autumn rain
In every year again.

On this Thanksgiving Day
With thankfulness we pray.

If you have a favorite or would like to add one you have written, just put it in the comments section below.

You can find more Thanksgiving poems with printable graphics in this collection:

Find 200 colorful graphics for the holidays in this exclusive collection:

The Thanksgiving pictures on this page may be used for personal use only. If you would like to request permission for use on websites or for other commercial use, contact the author.