Best halloween costume ideas for the end of the world

Other fun end of world sites:

December 21, 2012 is just around the corner and already we are hearing of flesh eating zombies hitting the streets – so is the world really going to end in 2012? I guess we won’t know for sure until December, but I for one am preparing to get the a great Halloween costume for November which may also serve me well during the apocalyptic season.

The Mayans really have a lot to answer for, but just in case I feel the costumes below may give you more of a chance to survive Armageddon – OK so if they don’t at least you went out with a bang rather than a whimper. 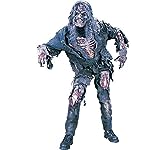 One wonders if some of the older rock stars will actually need to wear a zombie costume?

Not only are zombie costumes very popular at the moment with make-up effects that will give you the perfect rotten skin, but they also serve a second purpose. If the world happens to end thanks to a zombie apocalypse then you can simply blend in with the walking dead and hopefully not become a zombie. It may not be much of a life, stumbling around the world pretending to have no soul and feasting on brains, but it’s better than being dead isn’t it?

Whatever you decide, the zombie or walking dead halloween costume is likely to be the most popular costume this year, so make sure you order early. 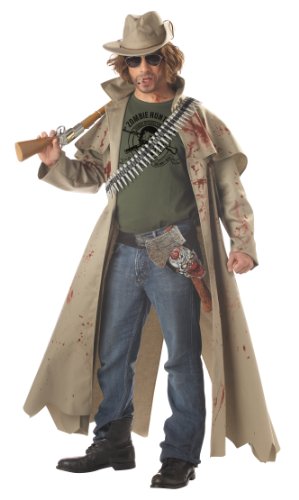 So you’ve played all the video games, studied the tumult of zombie movies and you fancy your chances eh? Then don your Poncho, grab your survival kit and gas mask and get your weapon of choice – you’re all ready to go hunting zombies.

Before you go though make sure you can distinguish between real zombies and those that are simply wearing their zombie costume – you might end up being the cause of the end of the world yourself.

This really is a fun costume for your budding zombie hunter – while you may not survive a true zombie apocalypse, you’ll certainly gain the respect of the common and garden zombie with your prowess and looks.

With all the walking dead, zombie hunters and other degenerates stumbling across the barren terrain left after the end of the world there’s only one true way to survive. So if you can’t beat them join them! By looking scarier than the monsters you’re likely to be safe as no one is going to want to take on the ‘end of level boss’ – you may be unlucky to meet a heroic adventurer whose just completed Diablo III, but to be honest – after fighting demons, they’ll probably overlook a middle of the road boss like you, so you’re chances of survival are pretty decent.

My personal favorite scary costume is the biohazard death skill mask combined with some sort of duster jacket – wow If you’re breathing in a biohazard then you surely must be tough?

There’s one costume that will guarantee your survival and that’s the Grim Reaper costume. No one likes having their soul collected by Death not even zombie – so everyone will run from you like a bat out of wherever bats come from. Heck, the only characters you have to watch out for are Bill and Ted!

The Death Halloween costume is great for the end of the world, but also may end up leading to a career in the movie industry – Stephen Zombieberg is sure to hire you in 2013.

If all else fails there’s one or two costumes that are definitely going to ensure your survival; there are several things that will survive the apocalypse, so to ensure your continued existence you should dress as one of the following items:

While it is very unlikely that the world will actually end and I'm sure we'll all be waking up on December 33, 2012 we all may as well spend some time celebrating on Halloween and at your End of World party - these halloween costume ideas are fun and family oriented. Why not prepare your themed party with them?