Bhai Dooj is a Hindu festival that is celebrated in India, Nepal and other countries where Hindus reside. It is celebrated on the last and 5th day of Diwali festival, which is a 5-day celebration and on the 2nd day after Diwali.

Bhai Dooj is a Hindu festival celebrated by sisters by praying for the long, happy and healthy life of their brothers. Prayers are offered to Lord Yama, the God Of Death, for their safety. After this, they perform aarti of their brothers and then apply Tilak or Tika on their foreheads.
Tilak is a mark made by applying a paste of vermillion, a red powder with some grains of rice.

Sweets and specially prepared dishes are then offered to the brothers. Brothers in return give blessings and gifts to the sisters.

In Nepal, sisters apply a seven coloured tikka on their brother's forehead.

Lord Yama, the God of death, has a sister Yamuna who wanted her brother to come to her house every year and partake goodies prepared by her. Lord Yama being very busy with noting down the deaths of human beings somehow was not able to fulfil the wish of his sister Yamuna.

Yamuna was very upset with this and one year she didn't invite Lord Yama. On realizing this, Lord Yama was overcome with feelings of guilt and to make amends he planned a surprise visit to his sister's house just after the Diwali festivities were over. Since Yama was visiting his sister that day no one died.

Seeing her brother, Yamuna was overjoyed. She prepared sweets and goodies for him and prayed for her brother Lord Yama's long life. She then asked him to visit her every year on this day.

Ever since this Hindu festival is being celebrated by sisters as Bhai dooj. Brothers too wait, as eagerly as their sisters, for this day.

Another legend has it that Lord Krishna visited his sister Subhadra after slaying the demon Narkasur. His sister welcomed him with sweets and applied tilak on his forehead. Many believe this started the celebration of this Hindu festival.

Bhai Dooj strengthens the bond of love between brothers and sisters.

In India, there are 2 Hindu festivals that celebrate the bond of love between a brother and sister. One is Raksha Bandhan or Rakhi and the other is Bhai Dooj. 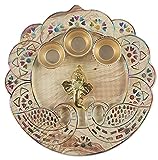 Some of my other hubs on Indian Festivals