Christmas Culture and Traditions in Croatia and the Former Yugoslavia

Nativity Set in an Socialist Society

In the Republic of Croatia (Hrvatska) as well as in Europe, you won't be seeing Christmas lights in November. If you have ever lived overseas, especially in America, this may come as a bit of a shock. Christmas somehow arrives just in time - 10-14 days before the actual day, in most cases. Sometimes at the very last moment. (You won't find any Santa Claus dolls with a sign saying "Ten Shopping Days Left"!)

As a forešt (foreigner) - I had always seen glitter peeking out of store windows from Halloween in the US. Here - you won't find it. Until 10 December you won't even have a clue that Christmas is just around the corner. Locals find this commercialism "disgusting". They call it "crass materialism!".

A Catholic country by tradition, the nativity scene can be found in store windows, lights and murals, whether or not the person attends church regularly, if ever. Here, you'll find a blurry line between tradition and belief. It's all part of the package, and that's how most Croatians have come to accept it, take it or leave it.

According to those who lived here before me, it wasn't always that way. During Yugoslavia (Jugoslavija), going to church was definitely out of fashion, and a nativity scene ("jaslica") was frowned upon. But those days have passed. As far as I can tell, most Croatians go with the cultural flow, regardless if they go to church or not.

Saints Days are part of the Season

Was a wealthy young woman, betrothed to marry into another prominent Syracuse family. No one had expected her to become a Christian and give her belongings to the poor. Like many of her age, she was persecuted when the Diokletian was the August of the Roman Empire. Under a law passed in 303 by the Diokletian cracking down on all Christians as "troublemakers", she and many others were tortured and killed in an attempt for her to renounce her faith. Her feast day is 13 December, and she is the patron saint of the blind and electricians. A fresco of her can be found in the Cathedral in Split.

An early Christian martyr, Barbara had been locked up in a tower by her father, a weathy pagan. He wished to protect her from the outside world. She had three windows built into her wall symbolizing the Trinity. Her father tried to kill her but she escaped to a mountain gorge where shepherds hid and protected her. One betrayed her as was turned to stone. She was later cruelly tortured and executed by her own father, who was later struck down the same night by lightning. She is a very popular saint in Greece and Eastern Europe, since many of these claims border on the fantastic.

This treasured saint of children who brought apples and chocolate every December 6 if they were good. And if they were not? There was always Krampus, the Croatian Grinch, who laid in wait to give them their just desserts. Sveti Nicola who really did exist in Asia Minor in the 3rd Century was known for this tradition, and some unlucky naughty children received onions instead of apples, with or without a complimentary switch with the intent to remind their parents to beat their little hineys into shape!

In the town of Komiža on Vis Island, the locals follow a curious custom. Every December 6th, an old wooden boat is designated as the offering used to burn as a sacrifice to the sea. No one can remember how the tradition began, but it may be as old as pagan times. Like all sacrifices, a self-chosen one is bound to be a better alternative than the one taken by force. Wooden boats are definitely harder to come by than they once were. Most modern nautical wonders are made of synthetic materials which aren't so nice for burning. Somehow, the residents of Komiža scare up a boat, which ceremonially burns alongside the ancient cathedral on the hill, facing the sea and its neighboring islands - Sv. Andrija, Brusnik and Jabuka (Apple).

This event brings worshipers and photographers from all over Croatia. The Dalmatian weather is almost always seasonably good - sunny and cold, but temperate. The rest of the country, wearing their snow boots in colder climates, watch the event and half curse the lucky Komižans for their California Dreaming winter weather.

Where IS Croatia, anyway?

Presents as an After-thought

Yes, there must be presents under the tree, but it hasn't gotten so material here quite yet. The main events? There is the obligatory Christmas concert put on by the school kids and nursery school tots. There must be sweets. A beautiful wreath or two to buy. There are dried figs to eat, dried since the autumn. Midnight mass, even if it means dressing up and being seen, is still an important event. There is the wonderful Christmas dinner, which must be slightly fabulous, and family based. After all, it is Christmas.

'Twas the Night Before Christmas...

The day before Christmas is almost as important as Christmas itself. Its name, Badnjak (Bad-n-Yack) refers to the Yuletide Log, which was an important part of the holiday in Christmases past. The event of bringing in the hugs log to burn the evening before Christmas, sing songs and prepare for the birth of Jesus is in the hearts of many grandmas and granpas who enjoyed delightful moments in material poverty and spiritual richness.

On Christmas Eve, a traditional hot meal of dried codfish stew is eaten with french bread for lunch. It is warm and filling. In towns around Split, there are large tureens of bakalar, as it is called, being served to the citizens of the town as a special way of celebrating the holiday.

The other taste treat traditionally served on Christmas Eve is a fried apple cookie called Pasrate (PA-shur-ah-tee) There are a variety of ways to make it. The recipe below is my favorite version. The whole idea is to make the balls small enough so that they fry evenly and don't remain raw in the center - I use two teaspoons to spoon them out one from the other to avoid the temptation of licking my fingers. (a definite no no!) They are drained and dusted in powdered sugar - simply wonderful. 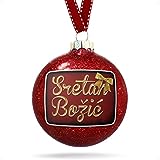