Christmas snow globes have been a popular part of Christmas decorations for nearly a couple of centuries. Who hasn’t as a child (after giving the Christmas snow globe a gentle shake or two) been fascinated by the tiny, white particles that churn around in a snow globe and look like real snow falling. Or imagined that they were walking in that miniature world before them?  A snow globe is a transparent circle usually made of glass that has encased within it a landscape (usually a wintry scene or Christmas ornament) and affixed to a solid base. While most snow globes contain wintry scenes, there are many types of snow globes with non-traditional designs which are currently manufactured and sold. The globe also usually contains water or some type of transparent liquid and tiny white particles that represent the fallen snow when the globe is gently shaken.

A Short History of Snow Globes

Although the exact time when snow globes came on the scene is a little murky, the history of snow globes or snow domes can be traced back to France around the mid-19th century, when homemade christmas gifts were more popular. They had succeeded lead paperweights which had been made a few years earlier. Snow globes appeared at the Universal Expo of 1878 , basically a world’s fair where manufacturers and inventors at the time would showcase their latest inventions or products. Shortly afterward, in 1879 at least five companies manufactured snow globes and sold them throughout Europe.

In 1889, a snow globe was sold that had a tiny model of the newly built Eiffel Tower in Paris marking the 100 year anniversary of the French Revolution. From there, the popularity of snow globes grew, especially in England during the Victorian Era where they then crossed the Atlantic to America. They were a popular collector’s item during the Roaring 20’s. Many of these Christmas snow globes were crafted by the Atlas Crystal Works Company which had factories in Germany and America. Most finely crafted Christmas snow globes still come from West Germany today.

In the United States, the first snow globe related patent was granted to Joseph Garaja of Pittsburgh ,Pennsylvania in 1929 who wanted to manufacture a snow globe model that showed a fish underwater and other styles of snow globes. During the 1940s, the Atlas Crystal Works Company manufactured military themed snow globes which are some of the most sought after snow globes by collectors today. With the invention of plastics during the 1950s, snow globes began to be mass produced and associated more with the travel industry as inexpensive tourist items associated with famous amusement parks, travel destinations or hotels rather than collectible Christmas snow globes. Their popularity as collector items began to diminish as snow globes were associated with tackiness and cheap plastic manufacturing. By the early 1960s, souvenir type of snow globes had been taken over by Hong Kong manufacturing.

In the 1970s, several American novelty and gift manufacturers decided to upgrade the production of snow globes as gift items and upgrade the quality of their production often including beautifully modeled landscapes, internal batteries that automatically churned the snow and musical boxes into their designs. Christopher Radko, a famous handmade Christmas decoration and novelty gift designer, contributed to the manufacture of high quality Christmas decorations including Christmas snow globes.

Just go onto your favorite search engine, whether it is Google or Microsoft Bing and you can find many sources for Christmas Snowglobes that are currently available for sale, but one of the better sources for finding Christmas snowglobes online is Pinterest.

Since writing this article, the powerhouse for finding Christmas snowglobes is now the popular site Pinterest. Pinterest, for those who are not familiar with the online site, is a virtual bulletin board with a variety of images with descriptions posted that have a direct link to the blog or website source of where the original image was originally posted. These images are referred to as "pins". There are many pins posted regarding Christmas snowglobes and you can find all these images on one long scrolling page. (The image above shows the Pinterest website with a search that was done using the following keywords: #christmas, #snowglobes.) You will be able to find a variety of Christmas snowglobes, and their corresponding sites, to view or if you are interested to purchase.

Furthermore, Pinterest allows you to post the pins you like on your own boards. You can create more than one board . This helps you group all your image "pins" on a virtual bulletin board of your own. According to Mashable, (a technology guru site) Pinterest will be updating their site to allow better searches on their website to make finding what you want easier. They will be rolling out these new features in the near future. As you get familiar with the site, you will be able to hone your search to find exactly what you are looking for online based on descriptive keywords and in much less time.

Like many other quality products finely crafted Christmas snow globes are distinguished by the quality of materials used and the craftsmanship of the product itself. For example, West German snow globes often use Viennese glass which is a high quality glass almost like crystal. The snow globes are usually placed on a real wooden base rather than a plastic one and the landscape or object inside the globe is finely detailed and painted.  The plastic pieces that represent the snow usually have glitter or an iridescent type of paint. This adds to the almost realistic image and feel of a miniature wintry scene.  A buyer can choose to purchase a snow globe with a music box of their favorite holiday tune.

Snow Globes Made In Many Themes

Modern manufacturing companies currently make Christmas snow globes in many themes. A shopper can find almost any type of snow globe suited to a shopper’s taste and pocketbook.

There are snow globes made with Disney characters, cartoon characters, fish themes , famous cities and any other number of holidays besides Christmas type décor.

There is even a ghoulish , snow globe modeled after The Nightmare Before Christmas character and of course, who can forget the famous Elvis Presley snow globe. Many of these snow globes are a slice of pure Americana.

Collectible Snowdomes
Books on Snowdomes or Snow globes are rare. The following are a selection found on Amazon from less than a handful of titles.
Buy Now

While not a Christmas snow globe, one of the most highly collectible snow globes, is the Disney snowglobe of Saint Paul's Cathedral which has a musical box that plays "Feed the Birds". It originally sold for $60.00 in the 1999-2000 Disney Catalogs. It was sold for a very limited time and is very difficult to find. When you shake the globe, the "snow" in the snow globe are white pigeons that fly around St. Paul's Cathedral in London, the same as in the 1964 movie Mary Poppins starring Julie Andrews and Dick Van Dyke. It comes with a commemorative plaque that says "Commemorative Snowglobe of St. Paul's Cathedral from Walt Disney's Mary Poppins. Premiere Date: August 27, 1964. This snow globe has sold for as high as $1538.11 on various auction sites, although over time its prices has fluctuated and it usually sells in the $300-600 range.

Having one of these in your snow globe collection, would be a rare treat!

In modern literature and film, snow globes are usually associated with happy childhood memories and innocence. Who can forget the opening scene of Citizen Kane (1941) where Orson Welles playing Charles Foster Kane drops a Christmas snow globe and as it smashes to the ground his life slowly ebbs away? Or his fascination with his favorite sled which he named “Rosebud” and become the dying magnate’s last words? Just an example of classic Hollywood storytelling with a Christmas snow globe representing the character’s happy childhood. With the advances made in  modern 3D technology modeling software, many computer generated animations are now being made that depict the childhood ideas of walking in the miniature world inside of the Christmas snow globe.

Whatever your taste might be there is bound to be a snow globe that you might enjoy! However, the Christmas snow globes with their classic wintry or nativity scenes are a Christmas decoration classic.

A View from Inside A Christmas Snowglobe 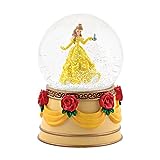