Christmas in Washington, DC in the 80s

This is a look back at some tourist spots in The District during the 1980s in December. This article is mostly from personal recollections. Hopefully some readers will find this article nostalgic and some readers will find the article an inspiration to make their own future memories. Some things have changed and some things are the same. Tourists to The District should keep in mind this article describes the situation 30 years ago.

The big Christmas Season performances in Washington, DC was the play "A Christmas Carol" at Fords Theater. Fords Theater is restored to look as is did on the night John Wilkes Booth assassinated President Abraham Lincoln. The Theater has a museum in the basement. Since it is reproduction of a mid-19th century theater the seats aren’t comfortable. It is relatively small which improves the theater experience in some plays because of the close proximity between the performers and the audience.

In the 1980s live entertainment and dining in Washington, DC was relatively inexpensive. This made for an affordable night of entertainment in the Capital.

The Old Post Office building was completed in 1899. The building escaped demolition because it was added to the National Register of Historic Places in 1973. The Old Post Office underwent renovation from 1979-1983. When it reopened it had upscale restaurants, boutiques, and retail kiosks. It also had a large stage. During the Christmas Season it was elaborately decorated and there were seasonal performances on the stage. The building’s design allowed good viewing of these performances.

The renovated Old Post Office didn’t meet expectations. By the end of the 1980s it had the look of a place that was in decline. Now the Old Post Office is home of the Trump International Hotel Washington, DC.

Besides the National Christmas Tree there was a tree, each about 6 feet tall, for each state and U.S. territory. These trees had ornaments representative of the state or territory. There was a Yule fire burning inside a large pit. The Pageant had live reindeer. The decorations seemed to get more elaborate each year. They added live entertainment, that wasn’t part of the official tree lighting ceremony. They also added free hot drinks and treats. At the beginning of the 1980s across from the Ellipse there was a Nativity scene paid for by private donations. This scene included live animals. In 1984 the Supreme Court made the Lynch vs Donnelly decision which allowed Nativity scenes as part of government displays. The 1984 Pageant of Peace included a Nativity display. The Pageant of Peace’s Nativity had plastic figures. The organization that had funded the Nativity near the Ellipse had a small display that year and announced they would no longer have Nativity displays. 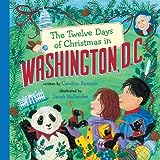