On the most south westerly point of the British mainland can be found the Duchy (or Kingdom!) of Cornwall. Rugged and beautiful, it is steeped in myth and legend, with strong traditions tied to the landscapes of land and sea.

Like Brittany in France, Cornwall retains and promotes its identity as a Celtic Nation. It boasts its own Brythonic language; called Kernowek (Kernewek in Unified Cornish and Modern Cornish) in the native tongue. The Cornish language nearly became extinct, but thankfully was preserved and restored now being spoken by many inhabitants of the region.

The Cornish culture is complete with festivals. Many of these are unique to this part of the British Isles, and we will be exploring the harvest festival known as Guldize (also spelled Guldhise).

Cornwall, on the South West tip of Great Britain 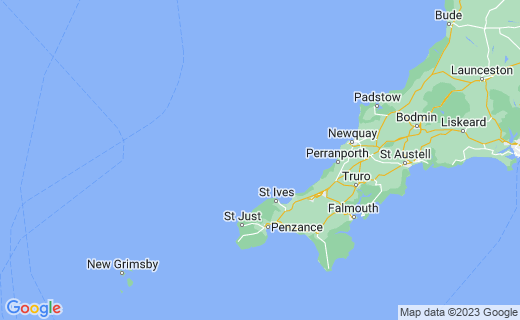 As you would expect from a nation with so many cultural influences, Britain has many different ways of celebrating the grain harvest. These usually take place in August or September, and traditionally the earlier festivals are attached to grains and soft fruit, whilst the later festivals are associated with hard fruit such as apples.

Most of you will be familiar with the festival of Lughnasadh. Named after the god Lugh, the month of August is honoured with this name in the Gaelic tongue and was celebrated in Ireland, Scotland, and the Isle of Man on the 1st of August. Games were held in parts of Ireland, with feasts taking place to enable clans to discuss matters and show off their wealth.

Lammas too is celebrated at this time of the year, giving thanks for the grain harvest. From the Old-English "hlaf-mas" meaning "loaf mass", this celebration is Anglo-Saxon in origin whereby a quantity of grain from the harvest is used in the baking of a loaf of bread. This in Christian times was then taken into a church to be blessed before being split into four and put back in the field; one piece in each quarter. Some customs see this loaf being used in a feast to bless the community, and there is also a custom of making the loaf as fancy as possible; often made in the shape of a sheaf of wheat. We also see Lammas as the name of one of the Scottish Quarter Days, used to divide the year up for the historical legal year.

The Cornish festival of Guldize takes place a little later, towards the end of September. It is not known whether this is a traditional date, but has been adopted by the Old Cornwall Society and other revivalist groups as a harvest festival to give thanks for the grain harvest, when the last head of wheat is cut.

Guldize is sometimes called "Gooldize" or "Goel Dheys" which translates as the “Feast of Ricks”. A rick is a structure of hay, corn, or straw, similar to a haystack. The festival is sometimes also called Dicklydize or Nickly Thize [1].

2008 marked the first festival to be held in Penzance, and the festival has spread through the region from 2010 onwards. It should be noted that the festival seems to have died out by the 19th Century and was replaced by the wider Harvest Festival held in churches around the region at the end of August and start of September.

Guldize appears to be part of the revival of Cornish folk culture. It seems to have been promoted by the Reverend Robert Stephen Hawker in the latter part of the 19th Century. Such festivals are very important in helping maintain and promote an individual culture and identity, and care and much research has been done to help bring back this festival in a sensitive and authentic manner.

The festival takes place when the wheat festival ends and the last head of corn is cut. This is done with great ceremony, and like the tradition seen around some parts of Britain, this last sheaf is treated with honour and is made into a “shock” or corn dolly to preserve the spirit of the wheat crop. Each town has its own design, but unlike the Anglo-Saxon tradition of burying the dolly back into the field at the start of ploughing season in February, the Cornish burn their corn dolly at Christmas, or feed it to their best cattle to bring good luck.

Guldize was first recorded by Richard Carew in 1602 in his “Survey of Cornwall” [2]. It is also mentioned by A. K. Hamilton Jenkin in 1933 in his book “Cornish Homes and Customs, who wrote that;

“On the evening of the day on which the neck was cut the harvesters would repair to the farmhouse kitchen. Here numerous company in addition to farmers own family would sit down to a substantial meal of broiled pork and potatoes, the second course consisted of Apple pie, cream and ‘fuggans’ the whole being washed down with cider and spirits” [3].

A fuggan is a type of pastry cake made with lard. You can find a recipe to make one of these tasty cakes for yourself at

Hamilton Jenkin also recorded the words spoken at the cutting of the head in his 1933 book “Cornwall and the Cornish”:

“In those days the whole of the reaping had to be done either with the hook or scythe. The harvest, in consequence, often lasted for many weeks. When the time came to cut the last handful of standing corn, one of the reapers would lift up the bunch high above his head and call out in a loud voice,

The rest would then shout,

and the reply would be,

Everyone then joined in shouting,

The farmer would then be called by name. We see here that the neck is given the name, “Mr. So-and-So” which suggests that once it could have been named something that was frowned upon by later Christian celebrations. Like many festivals around the British Isles, many rituals and practices were adopted by the Christian Church and re-invented to hide their Pagan Roots. Old gods and deities either became saints or devils, or simply became nameless. We see this in Cornwall with the lore around Piskies, who are described as being the Old Gods that have shrunk because they are not worshipped any more. As Christianity spread, they would shrink until they disappeared completely. It is not known who “Mr. So-and-So” is, but it is likely that he represents a deity associated with the harvest or fertility, or the spirit of the crop itself.

The harvest feast in the farm would go on well into the night. Members of the community would play music and sing songs such as “Here’s a health to the barley mow”, “Harvest Home”, and “Green Brooms”. With the revival of Guldize, this practice continues and festival attendees will hold a night of singing and story-telling. Use of Kernowek is encouraged by attendees in order to strengthen the bond with the Cornish culture.

Simon Reed in his 2009 publication, “The Cornish Traditional Year” mentions another custom;

We see that Guldize is part of the Cornish ritual year, that breaks it up into key points around the calendar.

Like many rural cultures, these festivals are set around an event to do with the harvest. Hard work is followed by celebration, and Guldize marks the time when thanks are given for the grain harvest and steps taken to bring luck for the following year. Rural communities would be dependent on the success of their crops.

In times when the wheat was cut by hand, one could not simply pop off to a supermarket if you ran out of flour for baking your bread with. Starvation was a very real threat, so the crop was honoured and rightful thanks given. Something that sadly, we as a modern society seem to have forgotten.

These old festivals help us to remember that we must not take our good fortune for granted.

The first video shows footage of the Guldize Festival of 2015, with a procession through Penzance.

The second video shows the traditional "Broom Stick" and "Cock in Britches" dances that are associated with Guldize.

With thanks to Simon Reed, and Gillian Nott for their assistance.