Halloween can be a fun time for the whole family. This include the family dog. Some pet owners don't have human children, but they do have canine children. They certainly aren't going to have their special child miss out on a fun holiday. Many owners enjoy dressing them up and taking them out to enjoy Halloween. But what costumes are sure to put a smile on human faces?

There are several costumes available for dogs with a Star Wars theme. These costumes include Princess Leia, Yoda, and Dark Vader. These costumes fit over the front paws, and give an appearance of mini-characters. They also come with a coordinating head piece.

Some dogs just need simple accessories such as the sash worn by Chewbacca or a hood similar to those worn by ewoks. Other ideas could include Star Wars themed head bands for dogs or creative ways to use cardboard to turn your dog into a Star Wars character.

If you do not feel like making your own costume for your dog, there are several costumes available to buy for a variety of dog sizes. Just like the Star Wars characters, there are characters from the Wizard of Oz specifically for dogs. These costumes include Dorothy, Cowardly Lion, Tin Man, and the Scarecrow. Again, these costumes fit over their front paws and has a coordinating head piece. This is a easy costume to assemble. Just use an appropriate size Hawaiian shirt, add a cabana hat, an perhaps attach a small camera to its collar. You could even try to have the dog wear sunglasses.

This is always a funny costume for dogs. It gives the appearance that the dog is the hot dog with bun on each side. You can choose ketchup or mustard. This costume may be less irritating for the dog because it fits around the mid-section and doesn't touch the paws or head.

This is a humorous costume that is a play on words. Have your dog dress up as a watch. This is another costume that is less irritating to the dog. It does not hinder movement of its legs nor does the dog have to wear anything on its head.

This costume comes with an animal print costume and black wig. You could add to the look by giving your dog a rawhide bone. This costume is also great when the entire family goes back to the stone-age this Halloween. Do you think it is cruel to put a dog in a costume?

How adorable is this? Your dog will be buzzing around all night in this adorable bumblebee costume. It will also keep them warm on cold Halloween nights.

This is such a cute idea. It is also another costume that can be made to fit only around the midsection, thus making the dog happier. Keep with the Halloween theme and turn your dog into a giant spider. Even those who are afraid of spiders will be saying 'awww' instead of screaming.

Clowns are supposed to be funny, clown dogs are even funnier. There are several clown costumes available for dogs but you can also make your own costume for them. 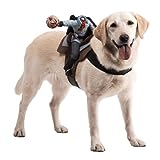 This is a simple costume yet so humorous. It is probably one of the less annoying costumes for a dog, that is unless they see their reflection. There are a variety "rider" costumes available such as a jockey, mailman, monkey, and a headless horseman. You can even come up with your own rider idea. Just simply attach the figure or doll to your dog's harness. In most cases, the dog will have no idea as long as they are used to wearing a harness leash. In 2009, this costume was also called the Swine Flu Dog due to the H1N1 outbreak. Regardless this is still humorous to see a dog dressed as a doctor. 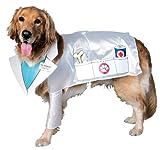 When choosing the right costume for you dog also consider your dog's temperament. If you dog doesn't like things on its paws don't get a costume that would bother its paws. Same goes for the head. Most dogs dislike things such as hats, headbands, and wigs. Perhaps a simple costume that wraps around the dog's midsection instead. Although we find these costumes adorable, they probably hate wearing them.

Where to buy dog costumes