St. Patrick’s Day on March 17 is a day when legends come to life and dreams of riches seem to be waiting just over the rainbow.

Just after the groundhog sees his shadow and Cupid has emptied his quiver, everyone starts to become obsessed with rainbows and the coveted pot of gold that is hidden at bow’s end.

People begin kissing and pinching others based on how green they are. And clover appears everywhere.

Get your kids into the spirit of St. Patrick’s Day with these fun ideas and activities about leprechauns, shamrocks, green and gold, rainbows, and Irish culture.

Make a leprechaun trap, brew some green root beer, follow a trail of gold, create rainbows in your room, and much more.

Leprechauns are small elves who are known for being pranksters. They mainly work as shoemakers. If you hear the sound of tiny hammers clanking against shoes, there is probably a leprechaun nearby. These creatures are also known for hording gold and hiding it at the end of a rainbow.

The hunt for leprechauns has been going on for centuries. According to legend, if you catch a leprechaun, he will take you to his gold as a bribe to let him go. But the tricky leprechaun will do all he can to avoid having to give up his gold.

You and your kids can try your luck at catching a leprechaun by building a leprechaun trap. It can be built from simple boxes. I used empty pasta boxes for mine (see pictures).

Be sure to disguise the trap so the leprechaun won’t get suspicious. Traps that look like tree stumps or mushrooms work well. Leprechauns are also attracted to rainbows and shamrocks. Decorate your trap with them as well as the color green.

Leave signs for the leprechaun. They can’t resist free gold. Use a bit of gold as bait. Don’t forget to include a ladder if you are making a pit-like trap.

So far I haven’t caught a leprechaun, but when I came into my classroom one morning I found evidence that a leprechaun had been there. Things in the room had been moved around. I also found tiny little green footprints smeared on the table and a piece of green cloth was caught on one of the traps. I also saw magic dust all around the piece of gold.  Maybe by St. Patrick's Day, a leprechaun will stumble into one of my traps!

You can disguise yourself as a leprechaun by making your own leprechaun hat. You will need green craft foam sheets. Roll one piece of the foam sheet into a cylinder measuring it to fit your head. Glue the cylinder piece together. Cut a brim out of another piece of foam and fit it over the cylinder. Add a top piece to the cylinder. Shamrocks and ribbon can be used for extra decorating touches. See the website below for more detailed instructions. 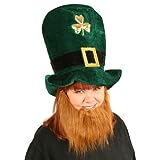 Rainbow Bites: Made from Real Rainbows! No Artificial Coloring.

Somewhere over the Rainbow

Make a rainbow by filling a container partially with water. Place a mirror partway in the water. Maneuver the mirror so that it reflects sunlight. You will see a rainbow appear.

You can also make a rainbow with a garden hose that has a mist nozzle. On a sunny day, watch as a rainbow appears when the hose is sprayed.

Another way to catch a rainbow is to sit a glass of water that is most of the way full on a window ledge. Make sure you have direct sunlight. Put a piece of white paper in the floor below the window. Adjust the glass and/or the paper until you are able to catch a rainbow on the paper.

Fill seven cups with water and add food coloring to each to make the colors of a rainbow (red, orange, yellow, green, blue, indigo, and violet). Let your child play with the water and experiment with what happens when the colors are mixed. Your child can also paint a picture of a rainbow using the colored water.

For an edible spin-off, use milk instead of water. Add food coloring to make a rainbow assortment of colors. Let your child make rainbow toast by painting the colors onto a piece of bread. Toast the bread in the oven when your child has finished his or her masterpiece. Sugar can be added to the milk for extra flavoring.

You can make slime with ½ cup of water and 1 cup of cornstarch. Add a few drops of green food coloring and mix until it becomes slimy. See this article for more information and more recipes for making slime.

Gather a variety of green craft materials such as tissue paper, construction paper, ribbon, and glitter. Let your child make a collage of green.

Mix up green Rice Krispies Treats by adding several drops of green food coloring as you melt the marshmallows.

You can also make homemade green root beer by adding a spoonful or two of green food coloring to the recipe in this article:

Make finger print shamrocks by dipping one of the child’s fingers into green paint. The index finger or the thumb typically works best. Then have the child draw a stem. Paint multiple shamrocks for a clover field.

Grow your own clover patch. Purchase some clover seeds and let your child plant them in a pot. Clover grows quickly, so your plants will sprout within a few days.

Go on a clover hunt. Let your child find different types of clover. Have a competition to see who can find a four leaf clover. If you find a clover with more than four leaves, you will have an extra heaping of good luck!

Draw a shamrock and make multiple copies of it. On one side of each shamrock draw shapes, numbers, or letters. Make two of each kind. The clovers can be used as a matching game.

Get a green bottle either empty or with drink still in it and remove the label.  Make a label for your own shamrock juice.  List the ingredients and the manufacturing information.  If your bottle is empty, make your own drink using lemonade or some other type of juice.  Add a few drops of green food coloring to give it a magic shamrock tint.

Following the Trail of Gold

Signs for the Leprechauns

Going for the Gold

Let your kids be leprechauns in search of gold. Hide pieces of gold for your kids to find. You can use gold coins, gold rings, or chocolate coins. If your kids are old enough to read, you can leave clues for them to follow.

Pops Cereal looks like golden nuggets. Make a trail of gold for the kids to follow by sprinkling gold cereal around. It can lead to a leprechauns secret cache. Place gold-foiled candy and rainbow colored Skittles at the end of the trail for a special treat.

Use magnets to explore the properties of gold and other precious metals. Real gold is not magnetic. Place some jewelry out for the kids to test to see what is real and what is not. Get some fool’s gold and let your child examine the difference between real gold and fool’s gold.

Let the kids play around with a scale and weighing pieces of gold. Find yellow Legos, gold jewelry, gold coins, or any other kind of gold. Give them some play money to trade for the gold. You can set up a pretend jewelry store as well.

The Keeper Of The Crock Of Gold:: Irish Leprechaun Tales
Buy Now

Let your children experience a bit of Irish culture. Play some Irish music for them. Groups such as Celtic Woman, Enya, and Clannad and music from the show Riverdance are good examples of Irish music. Show your children a video of step dancing and let them try it for themselves. Let them dance a jig also. Playlist.com is a useful site to sample music. Just type in the name of the group and you will be able to play their songs for free. Search for “Irish jig” to find good examples of jig music for dancing.

Play some traditional Irish highland games. Try these Gaelic Games of Heave Ho and Shoot for the Noon.

May the road rise to meet you,
May the wind be always at your back,
May the sun shine warm upon your face,
May the rains fall soft upon your fields,
And, until we meet again,
May God hold you in the hollow of His hand.

End the toast by saying “Sláinte” (pronounced sloynta) which is Gaelic for “cheers.”

Discuss some other Irish legends with your kids.  Stories of fairies, pixies, elves, gnomes, and other magical creatures are popular in Irish culture.  Explore some tales of fairies and magic.

Talk about the legendary Blarney Stone and the gift of gab.  Anyone who kisses the Blarney Stone is said to become an eloquent speaker.  Make your own Blarney Stone.  Find a smooth rock.  Paint or decorate it as you wish.

Play Pass the Blarney Stone.  Sit in a circle and pass the stone from person to person like the game of Hot Potato.  However, since you now have the gift of gab, you must tell a story as you pass the rock.  The first person begins by saying a word to start the story.  Each person adds one word as the rock is passed to them.  When the game is over, you should have your own legendary tale.