We all have that one friend or family member who is completely and utterly obsessed with comic books, and chances are that if you're reading this article, it's because you're looking for a gift for them.

One of the great things about finding the perfect present for a comic book lover is that there are tons of options, and I'm not kidding. Unfortunately though, for many people who don't know a thing about comics other than the fact that you read them, it can be a challenge to find the right gift.

As an individual who's an avid comic book reader and collector myself, I thought I'd help out by putting together a list of some great gift ideas that any comic book enthusiast would love.

Every true comic book enthusiast knows that half of the fun is reading the books and the other half is collecting them, but when money is tight, we'll take whatever we can get to satisfy our need to read!

This one is a no-brainer and you can't go wrong with it. Some comic book companies offer the ability to sign up to a subscription-based service that will allow you read as many comics that you'd like for a flat rate. I'm not aware if DC has this, but I do know that Marvel does, and I currently have a subscription to Marvel Digital Comics Unlimitedat the moment and I love it. For just $5/month, I get access to over 10,000 Marvel comics and more are added every weekday. There's even an app so that I can read them on my iPhone, and I'm pretty sure there's one for the iPad as well!

It's easily one of the best investments I've ever made because physical comic books can quickly get expensive at $3.99 an issue, and you'll need to keep buying them in order to keep up with the story (a 12-issue comic book series would then be costing you around $50). For the occasional reader it's bearable, but for those of us who keep up with multiple stories at once, we might as well hand our whole paycheck over to the cashier.

These are basically hardcover (or softcover) books with the whole comic series in-between the covers. They're ideal for newcomers to the comic book world since they're affordable and hold the whole story in them, and also because if they're damaged, it's not as much of a big deal.

If you want to get them something even better though, then consider purchasing them a rare or hard to find comic book. Certain comics from the Silver and Bronze Age are worth the most, and can be an amazing surprise to a serious comic collector.

If you're willing to shed some green, then you can find someone to make you an amazing superhero poster of the comic book geek you're shopping for. Can you imagine their face when they unwrap that box and pull out a framed portrait of them in their own superhero getup, complete with a cape?

While you might decide to do a Google search for mascot or character artists, you'll find that a lot of them can be super pricey, asking $350 to even $1000 for this to be done. Instead, I recommend looking through sites such as DeviantART, which is an online community that serves as a sort of art portfolio space for amateur individuals. You can find some absolutely amazing artists (in many cases, better than those that would charge you insane amounts of money) who'd be ecstatic to take on the project for under $200. How should I know? I went this route before with a gift for a special friend. 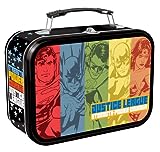 Does your friend in question have a favorite superhero or comic book publisher, such as DC or Marvel? Chances are they do, and they'd probably love to get some comic-related memorabilia.

Drop by the local comic book store and see what they have to offer since they're usually loaded with awesome stuff! Action figures, novelty items, tin lunchboxes, mini statues, and more can all be found there, and it's the best place to look!

If the comic book geek that you're shopping for has their own place, then you can always surprise them with a really cool piece of furniture that will stand out. Perhaps a certain superhero-themed table lamp, a comic book panel picture frame, or some shot glasses?

You can even find unique and personalized furniture and household items on sites such as Etsy. Custom framed prints, hand-sewn blankets and pillows, tables and chairs, and lots of other cool stuff. I personally think that the custom framed posters and artwork are the best pieces of accent furniture a comic book enthusiast could receive as a gift. I mean, look at that set of posters that were made by an Etsy artist to the right -- aren't they cool?

Most people who like comic books also like video games, especially if they're younger. There are so many video game titles based around superheroes that I couldn't tell you where to start, except for the obvious fact that you'll want to find a game that includes their favorite superhero.

As a suggestion, you might want to get them fighting games such as Marvel vs. Capcom, or DC Universe vs. Mortal Combat so that they can fight superhero against superhero! It'll definitely keep them busy for a while.

Movies are also a nice gift, but gift these as a last resort unless they specifically tell you that they'd enjoy a movie. The reason you'll want to avoid them otherwise is because most avid comic fans usually aren't too happy with cinematic versions of the books, and prefer to stick with the paper alternative.

The next best thing to reading and collecting comics would be making your comics! If they've ever expressed interest in creating comics or you just think they'd have a lot of fun doing so, there is certain comic book creator software that you can purchase and give to them as a gift. I personally recommend Comic Life (available to the right from Amazon.com) which is tons of fun and easy to use, and it works on both Mac and PC.

If all else has failed and you can't figure out what on Earth to get them, then buy them a gift certificate to their favorite comic book store. Many shops offer some sort of gift certificate or credit system, but you usually need to ask them about it.

Gift certificates can be better than all of the above since it'll give them a choice of their own on what to buy, but they're not the most personable. Either way, a good amount to put on a gift card for a comic book store would be around $50 or more, with that being minimum.

If you're still looking for the perfect gift, consider checking out comicbookgiftideas.com! They've a range of great gift ideas and information to help you out.