Let's be honest, men don't really need a reason to dress up and wear funny costumes. Heck, we certainly don't need a special holiday for it! However, since such a holiday exists, we'll take it!

Halloween is really a great time to just have fun being who ever and whaever you want to be. In addition, it's a chance to show how creative you can be in terms of a costume. With those things in mind, we offer some great suggestions for Halloween costumes for men.

You can't get much cooler than going out as the world's greatest detective (Sherlock Holmes notwithstanding).

Modeled on "The Dark Knight" film version, this particular costume design has a great authentic look that will make you the hit of the party.

If you were alive any time around the late '80s, you're probably well-aware of the Where's Waldo? phenomenon.

The premise of the book series was deceptively simple: find the lead character on each two-page spread, each of which depicted a scene from Waldo's various travels. The challenge, however, came from the fact that scenes would feature a lot of red herrings that looked amazingly similar to the ubiquitous Waldo.

With that in mind, this costume - with its trademark, red-and-white striped Waldo shirt, glasses and hat - is not only a little bit retro, but a great conversation starter.

Sign up to go wear no man has gone before with this great Halloween costume!

This epic Star Fleet uniform shirt will stand out and leave an impression at any party or event.

It's a pimp outfit. 'Nuf said.

It would probably take a dedicated team of Nobel-winning scientists to explain why, but for some reason gorilla suits just make for perfect Halloween costumes. That being the case, it's almost impossible to go wrong with a classic like this.

Another classic, Gumby, also has an attraction - as a costume - that's a little weird to qualify. However, it's within that very weirdness that it's appeal lies. (Don't ask me to explain it any better than that. I just know that - as a costume - it works for some reason.) 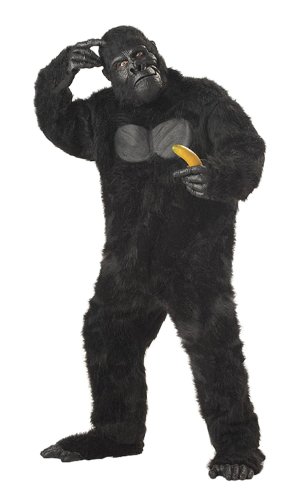 Poll on Halloween Costumes for Men

Which type of costume do you prefer?

Summary of Halloween Costumes for Men

In retrospect, there are tons of great costumes (and costume ideas) out there in the marketplace for you to select from. That being the case, you can surely find something that allows you to make a statement.

And if you already have a costume, maybe it's time to liven things up a little bit. There's no need to be predictable, especially on a day like Halloween, when you can let your imagination roam free. go for something different and exciting!

And if you're also shopping for someone other than yourself, please feel free to visit:

Best Costumes for Women for All Occasions