Guardian of the Galaxy Rocket Raccoon Dress Up Halloween Costume

Rocket Raccoon Costume is a Great Alternative to Superhero Costumes

It seems every year, the shelves of department stores are lined with wall to wall superhero costumes for boys. If there is more than one choice for boys, it seems to be zombies, serial killers, and generic costumes like ghosts. However, this year, kids of all ages have a brand new option thanks to the 2014 release of the live action movie Guardians of the Galaxy.

Guardians of the Galaxy isn't new, in fact, it has been around for generations, but only in the comic and cartoon form. With the introduction of the live action movie, the Marvel characters that many already love are becoming more mainstream. Personally, I like the costumes inspired by the new film, especially Rocket Raccoon. I know what you are thinking aren't Guardians of the Galaxy superheroes?

The answer is yes, but these new superheroes are cooler and fresher than superheroes we have seen in the past. Learn more about my favorite Guardians of the Galaxy character, Rocket Raccoon, and why the characters Halloween or dress-up costume is going to be such a huge hit - this year and for many years to come.

Who is Rocket Raccoon?

If you haven't seen the movie, yet, and you aren't familiar with the Marvel comic Guardians of the Galaxy, you may be wondering who Rocket Raccoon is. Well, Rocket Raccoon is a character from both the comic and the movie. In the earliest days, Rocket wasn't a member of the team, but when the comic was adapted in 2008, Rocket became a full-fledged member of the Guardians.

Rocket's talents include the ability to shoot anything. In addition to being an expert marksman, Rocket is also a master tactician. If you are familiar with the Beatles 1968 song, "Rocky Raccoon,

With the super popularity of the movie, I'm pretty confident these costumes are going to fly off the shelves, this Halloween season. It's also important to remember that little girls aren't the only ones that like to dress up. The little boys in your life are sure to love dressing up in Guardians of the Galaxy costumes for weeks, if not months, after Halloween is over.

There are dozens of Rocket Raccoon costumes on the Internet, and these costumes vary in size from infant to men;s, which means anyone - and I mean anyone - that wants to dress up as the Master Tactician, an anthropomorphic raccoon can do so. It's also important to realize that these costumes aren't just for Halloween. In fact, they can be worn as cosplay costumes, worn to conventions, or used just for dress-up at home. 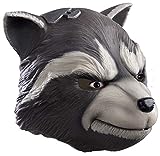 This plastic mask allows you to use your imagination to create the perfect Rocket Raccoon costume.

Need some Rocket Raccoon Inspiration? Get it Here

Guardian of the Galaxy Hero Poll

Who is your Favorite Guardian of the Galaxy Character? 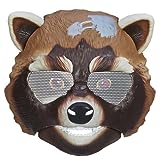 Rocket Raccoon is Sure to be a Hit with Everybody

Due to his loveable exterior and tough demeanor, Rocket Raccoon is my favorite Guardians of the Galaxy character. Rocket has become even more appealing in the 2014 live action movie because he is voiced by Bradley Cooper, which seems like a perfect fit. Rocket has a human-like form with the face of a raccoon and the demeanor of a stud - ready to tackle anything that comes his way.

Check out Rocket Raccoon in Action

With the Rocket Raccoon dress up or Halloween costume, you can ditch the traditional superhero costumes such as Batman, Superman, and Spiderman, and impress your friends and fellow trick-or-treaters with a brand new superhero. In addition to Rocket, there are about half a dozen other Guardians of the Galaxy costumes that you can enjoy this Halloween and for years to come.

Check out all the Guardians of Galaxy Costumes

Thanks for stopping by! Feel free to Leave your Comments Below