Whitman’s Candies were started in 1842 by Stephen Whitman. He had a shop in Philadephia, near the waterfront. Many of his early customers were sailors who furnished Whitman with various ingredients that really made his candy stand out. His candies were soon popular locally, but Whitman wanted more, he soon started advertising in newspapers and magazines.

Whitman’s soon outgrew the single shop and expanded to a large candy factory. The traditional way that people ordered an assortment of chocolates was by going into a confectioners and choosing each chocolate which would then be packaged by the clerk. Whitman made a change to this, he started prepackaging chocolates in a small, decorated tin box. These instantaneous chocolates became widely available and the tin boxes were used for keepsakes when the chocolates had been consumed.

These tins were soon wrapped in cellophane to keep the candy fresh and clean. This was the first commercial use of the new packing product. The chocolates became a common sale item in drugstores by the turn of the century.

In 1912 the Whitman Sampler was created, this was an assortment of the most popular chocolates of the company. The sampler label was designed at the same time and was based on a cross stitch sampler that hung in the president’s home. The samplers were widely advertised and the cardboard box full of chocolates was an immediate hit.

During WWI and WWII millions of chocolates were distributed to American soldiers. Whitman Sampler easily survived the Depressing and continues to be a Christmas tradition to this day. I don’t remember 1 year I my childhood where I did not receive a mini Whitman Sampler in my Christmas stocking and they are still in millions of stockings each year. 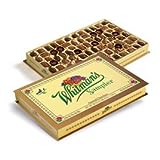