How To Celebrate Ukraine New Year's Traditions For 20 Days

Patty began studying Russian Language & Culture in Grade 7, graduating college with a 2nd major in the study at The Ohio State University.

Welcome To New Year's In Ukraine!

Activities for a Ukrainian New Year's include dances from the Carpathian Mountains and music from bagpipes!

Ukraine - New Year's With a Difference

The Ukrainian New Year's holiday season is a giant undertaking that requires much preparation and work, but manifests joy and cheer when done properly.

With an uncle (in-law) from Ukraine and a Russian language teacher from that country, I learned in high school all about the traditions that these adults had celebrated for years. When they emigrated to America, they brought those colorful celebrations with them.

Modern New Year's is the only federal holiday observed in Ukraine. The folk holiday on January 13th, called "Malanka", expresses the wish for spring to come soon.

In America, many churches and other houses of worship hold services on Christmas Eve, Christmas Day, and New Year's Eve.

In Ukraine during the Cold War, this did not occur. The Bible and the Torah were hidden under floor boards in homes and the floors covered with rugs and furniture, because to have these books was a crime of which the consequence was jail time at the least.

Religious services were held in Ukraine at home in secret, because the leadership of the USSR had turned all the houses of worship into museums. Today however, the churches and other faith-based facilities are open and provide services to a variety of faiths on New Year's Eve and Day. This includes churches of protestants, Greek Orthodox, Ukrainian Orthodox, Serbian Orthodox, and other Orthodox sects.

The Orthodox and Catholic churches split long ago over many disagreements, but the primary concern was whether to use three fingers together or two fingers together when making the sign of the cross (Reference: Professor Father Matej Matejich, Russian Area literature and history classes, The Ohio State University).

Those who disagreed with tradition were smaller in number and spit away to become the Catholic Church and later, the Anglican Church/Church of England and similar denominations. However, when a Roman Pope dies, the Orthodox clergy still participate in his remembrances.

Only One Ukrainian National Holiday

New Year's on December 31 - January 1 is the only national holiday observed by the government of Ukraine, with the closing of government offices, schools, post offices, and banks. When January 1 falls on a weekend day, the Monday afterward is also a holiday, making for a three-day festival.

Under Soviet rule, especially in the 1950s and 1960s of the Cold War, workers went to the job seven days a week all year long, with rarely a day off. Women who stayed at home with young children and more elderly women spent their days scrubbing the sidewalks and the actual streets in what is today's Ukraine and Russia. Work was Number One in the USSR republics.

In contrast, a three-day weekend today is a vacation!

Two or three days of festivities among families and friends include music, gifts as through it were Christmas, good food, a midnight dinner, and discussing all good things that happened during the year and great things to come in the new year. Midnight January 1 brings shouts of joys, congratulations one to another among those present, more music, and some dancing. However, in Ukraine, there are two midnights.

Midnight congratulations, dancing, and special music (together known as Kolomyjka) can happen twice in Ukraine, because of the long-held tradition of noting midnight on both Moscow time and Kiev time.

The Orthodox Christmas occurs on January 6 and some families celebrate both Christmases - December and January. This is a little like the Twelve Days Of Christmas around Europe and parts of America and I remember learning to sing the song of the same name in Russian. Indeed, January 6 is Twelfth Night to some of us.

Another significance of January 6 is that it and/or January 14 is the feast day of Saint Melanie the Younger, from whose name the holiday nomenclature "Malanka" is likely derived. Malanka is another New Year's celebration in hopes of a soon springtime advent. Much music and lively dancing attach themselves to this holiday, but caroling and mummers' parades are truly deeply ingrained traditions.

Carolers carry a large golden star with them as they go, representing the sun, although it reminds many of the Star of Bethlehem.

People love to go caroling indoors and outdoors in Ukraine during Malanka and all the way from January 6 through January 19, but especially on January 13 and 14. The tradition is known as a "Koliada", which may include skits about Ukraine's foundation myths.

Carolers who perform indoors often wear costumes as if it were Halloween.

People dress as traditional Indigenous Peoples, Gypsies. nurses, witches, traditional goblins, goats, bears in bearskins, the Old Man, the Malanka Death (a zombie bride), and even Nazis on the night of January 13 for a special parade.

Parading door-to-door in the cold weather, the revelers sing and dance, perform skits, and play harmless practical jokes that make everyone laugh.

What Do the Carpathian Mountains Have In Common with Malanka? 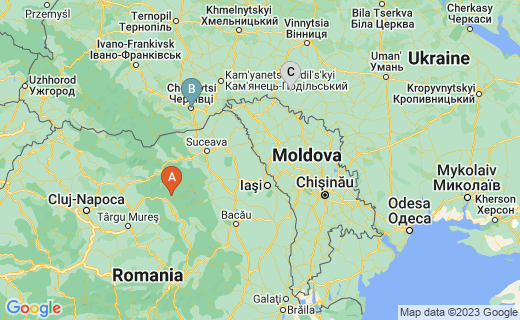 Dedicated organizations make sure the holiday is preserved and plan all year for it, like Mardi Gras or the Rose Bowl Parade.

Malanka runs parallel to Mardi Gras in activities and is similarly the last big party before the church season of Lent. Dedicated organizations make sure the holiday is preserved and plan all year for it, like Mardi Gras or the Rose Bowl Parade.

The song and dance performed at midnight to welcome the New Year comes from a band of Ukrainians who lived in the Carpathian Mountains of Ukraine and Romania.

These people are the lively Hutsuls or гуцули (goo-tsoo-lee) and they seem to have brought Ukrainian Easter Egg art to Romania, where it took on a slightly different variation. These decorated eggs are seen in variations all over Southeastern Europe, Southwestern former USSR republics, and Russia.

The Music Of Malanka Malanka and the Orthodoxy

The Trees Who Listen

Dried cherries are a staple during the winter in Ukraine, as cranberries were for Native Americans. During Malanka, some people go outside and ask their fruit trees to produce more fruit, in the traditional belief that the trees can understand human speech during this holiday. This is like the belief that animals can speak on Christmas Eve.

Another local belief is that the platform in the kitchen on which the cooking stove sits and on which the residents can sleep at night, comes alive and wishes to dance. Therefore, no one can sleep on the night of January 13 and must celebrate the New Year and Malanka.

Many families whop keep the holiday traditions select one of the daughters of the household to play "Malanka", a clumsy oafish girl who drops things and falls a lot. This is a general reminder for the year to be careful.

Outside, a high school or college-aged man appears dressed as one of the woman of the town and parodies her as celebrants try to guess who she is.

Sometimes, two men in bear skins or huge bales of hay representing fur will perform a simulated bear fight in the center of town. In the same place, some towns build a bonfire,. people stuff their clothing with worn out masks and costumes to look like hunchbacks and jump over the fire.

So many activities occur all around the country, that they cannot all be recorded; and new ones are invented regularly.

Foods Of the Season

New Year's celebration food have become eclectic, especially int he diaspora in the growing Canadian pockets of Ukrainian celebration. A traditional menu might include any of these foods: