How to Make a Mad Scientist Costume

Halloween is the perfect time to show your... ahem... shall we call it your "eccentric" side? After all, mad scientists have fascinated us ever since Mary Shelley published Frankenstein; or The Modern Prometheus in 1818.

This year, as we anxiously anticipate whether the world will truly end on December 21st, we've been seeing apocalyptic zombies everywhere. The poor scientists who creates them, however, is getting hardly any recognition at all!

Instead of dressing up as yet another zombie, why not be the mastermind that enabled them to roam the earth's final days? You can create a more elaborate costume than Bill did, while keeping your costs under thirty bucks. Keep reading to find out how.

Watch the mad scientist as he discovers that his experiment has worked!

This video, shared by the Monster Island News website, is accompanied by a note explaining that when Universal released the film, they hired actresses to sit in audiences so they could scream and run up the aisle to escape! They also hired nurses to be on hand during its showings to heighten the movie's fear factor.

Consider carrying some props with instant smoke or flash flame effects when you wear your mad scientist costume to add that "extra something" for maximum impact. Imagine how your friends would respond to seeing that crazy science beaker you're carrying burst into flame!

To make it look like you've lived through your explosions, burn a cork, blow out the flame, and smudge it onto your face and hands to achieve the look shown in the photo above.

You must be 18 to purchase most flash effects, and caution is advised as these create real fire. Don't ruin your holiday because you didn't read the instructions or used them irresponsibly! 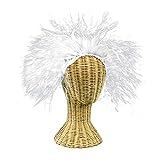 Clip rubber tubing or wires into this wig for a truly deranged look.

Most eccentric geniuses have that "look." You know, the flighty, bird-in-a-cage-that-is-dying-to-get-out look. Remember Einstein's hair? You can just imagine him running his fingers through it as he puzzled out his time-space continuum, and he doesn't even make the list of top nine real mad scientists that ever lived! Maybe he made the top ten, though. Who knows?

Special effects glasses, wigs, and other accessories can help you achieve the crazed look you want.

You'll want to wear ordinary black or beige slacks or jeans with some sturdy, stodgy shoes. You probably have these in your wardrobe already. They'll also help you stay warm if the weather happens to turn chilly while you're out terrorizing your community! Consider wearing mismatched shoes or socks if you want to introduce an "absent-minded" aspect to your costume.

As you can see, it's possible to put together a fabulous Mad Scientist costume for $20-$50!

Best of all, now that you've decided on being a crazed genius, you can get away with saying just about anything you want to without breaking character! Especially if you just happen to be conducting research on how to take over the world one zombie at a time over the next few months.