Being of Hungarian descent I have a fascination with the folk art and culture of the Magyars. Enjoy the beauty of it with me in these hubs.

Because this art and custom is so ancient, there are many cultures that share it: Greeks, Ukrainians (perhaps the best known), Czechs, Russians, Romanians, and more. Stemming from pagan roots, of marking the change from winter to spring, and representing good wishes and blessing, it is no wonder that it folded easily into the Christian celebration of Easter.

The methods, colors, and motifs are varied, but all hold the uniting factor of symbolizing the death and resurrection of Christ during this pivotal holiday.

Find on this page:

The Symbols and Motifs, and their Meaning

Traditionally, Magyars exchanged decorated eggs the way we use a greeting card today. Using symbols and symbolic colors a message was sent, usually consisting of good wishes for long life or family and personal blessings.

It began as a pagan custom, later taking on Christian meanings as the people adopted Christianity.

Like their embroideries, the Hungarians originally preferred intricate patterns, but very simple color choices, mainly red, for their Easter eggs.

Today, perhaps due to modern influences or maybe as a response to how Hungarians are viewed (and thus view themselves) the colors are often bright and multicolored.

The patterns seem to simplify with the addition of different colors.

Dr. István Györffy in his study on painted eggs [writes: .. "The Hungarian folk Easter eggs are characterized by tasteful simplicity in a one color pattern which are mostly red. Brown, black, and blue rarely occur. They do not care for the multi-colored eggs. The most beautiful patterns are made ​​in seven Csango villages (Brasov county) and in Szekely." Here is how the eggs are prepared and decorated. Most instructions are related to Ukrainian pysanky, but the Hungarians use the same tools and methods.

The Designs: Making a Decorative Egg

When using the Pysanky method dyes are added on from the lightest to the darkest colors. With wax preserving the color before the next darker color is applied.

With the Scratching method, the dark color is scratched away to produce the designs.

There is an age old method of using plants and plant dyes to make a subtle color. Leaves are attached to an egg and then it is soaked in a dye solution or onion skins are wrapped around them to impart color. 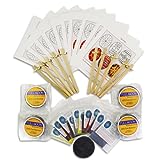 Everything you need, in a kit, to create your own Eastern European eggs.

Use the decoration ideas and templates in my Hungarian Way page to design, and this kit to complete your own artistic masterpieces.

Sets of traditional Kistkas, wax, dyes, and instructional booklets make it possible to have a family gathering for this craft.

A very important tip in making your own, is to choose eggs with no cracks or imperfections in the shell.

My Oldtime Method of Preparing the Shell

When I was a kid and made these eggs, my method was quite a bit simpler:

Not terribly sanitary, but in those days I just wanted to decorate for myself and threw away the removed egg.

Short history of the Easter egg reaching into the pagan customs and motif meanings.

How a Symbol of Easter is Born

The Christian holiday marks the Resurrection of Christ from the grave, and this new life for a believer was represented well by the age old symbolism of the egg with new life.

Symbolic Of Rebirth and Eternal Life

Similarly, symbols for concepts found inside this most important event for Christians found their way into designs painted on the eggs:

Spring rituals celebrating new life from winter's death are ancient, and even predates dynastic Egypt. As old as the rituals, the custom of decorating eggs has been found to be part of it.

The old motifs came to have new meanings with the spread of Christianity. A layer of these beliefs on the ancient markings and meanings made this a central custom that carried on, even when the original pagan beliefs were gone.

As time progressed, the designs changed from abstract symbols more recognizable motifs that were common to the painting and Magyar style embroidery decorations that Hungarians commonly adorned even everyday life items. Hearts, leaves, roses and tulips are among the most popular and familiar to us today.

Various geometric designs and symbols such as the triskele are used, they often mean life or good fortune. History of the Symbolic Egg in Eastern Europe

A very early find of an Avar burial ground in Croatia yielded evidence of these iconic mementoes with carved designs as grave goods. In Slavic areas decorated them from the 10th century were discovered, although the act of using designs on eggs in rituals reaches far, far back and is found in ancient Mesopotamia.

In countries like Hungary, the decorations are "written" on the surface with

a special tool, called a Kistka.

Do you collect any type of easter egg?

The distinctives of Hungarian style in this Eastern European craft.

A Gallery Of Designs

In all Hungarian folklore decorative arts, floral elements are favored. Tulips, leaves, roses, and daisy forms, as well as cornflower and others might well be seen; especially when painting.

Design Inspiration for You The Etching Method Of Making Pysanky

Sgraffito is a scratching method create two tone designs, in this case. It is much like the method used for pottery.

The shell is dyed and then a sharp tool such as a needle or sharp knife is used to carve the design into the surface.

The color of the undyed eggshell contrasting with the dye makes the design.

Often onion skins were used for the dye, which gives a warm red-brown color.

Please leave comments about your experience with egg decorating or collecting. Can you see the similarities and distinctions of the regional styles of egg decorating?