Federated Department Stores began in 1851 when Simon Lazarus, studying to become a rabbi, arrived in Columbus, Ohio before the Civil War and opened a store on Town Street. This was a few blocks away from both a jail for prisoners of war (later, the Ohio Penitentiary) and in the other direction, what today is the Ohio Statehouse.

The northwest suburb of Dublin at this time was the Wild West, just 48 years after statehood in 1803, with muddy streets, shoot-‘em-up saloons, and blacksmiths. To the northeast, what is now Westerville was mostly farmland. Columbus, though, had a department store whose great Christmas Parade created similar festivities in Westerville over the years.

Lazarus set consistent prices for goods in his store and business grew. Another custom was Lazarus parades.

In the 1890s, news of the Spanish American War (Teddy Roosevelt’s Rough Riders, et.al.) was posted as soon as it was updated in the large windows of Lazarus for everyone to see (my grandfather saw it).

When the war ended and Columbus servicemen returned from the war, the entire retinue of Lazarus employees marched in parade formation in the streets to welcome the veterans home. It was an all-male staff of 150 people marching at the time, but women were hired by the store shortly thereafter.

This was very different from some other businesses and even new fast-food chains after WWII. A high school girl down the street from us in the 1970s joined the Navy and served close to the Viet Nam action, but she could not get a job at McDonalds because they hired only men! That chain later hired women, but Lazarus beat them to it by over 50 years. They were the first equal opportunity employer in Columbus.

The Friday parade ended at the Lazarus front door, with Santa’s float bringing up the rear and signaling the shopping to begin, and people loved it for decades

Lazarus was particularly well known for hiring women and the physically challenged during the first half of the 20th century. Another hallmark was the return of goods for refund or exchange without questions. Because of all this, people flocked to the annual Christmas parade and the holiday sales beginning right afterward.

The day after Thanksgiving was the day of the Lazarus Christmas Parade after the store moved to High Street in the 1910s. I fact, Fred Lazarus, Jr. and others influenced President Franklin Roosevelt to make Thanksgiving the 4th Thursday in November to allow an extra weekend of shopping. The Friday parade ended at the Lazarus front door, with Santa’s float bringing up the rear and signaling the shopping to begin, and people loved it for decades

The same day, the gigantic picture windows on High Street and Town Street were filled with Christmas and winter scenes that included mechanical and electrical figures that entertained children who walked up the special Christmas ramps placed in front of the windows so they could see better.

The window wonderland is something that we miss today. The building merged with other Federated Stores to become Macy’s, and then a county government office. Morehouse Fashion across High Street became The Union store, finally giving way to the City Center Mall, which became Columbus Commons with a carousel and performance space. 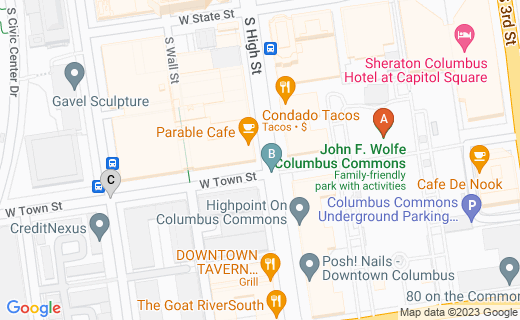 The parade was shorter than Macy’s Thanksgiving Day Parade but showcased its own local stars – the beloved Flippo the Clown, the star of Lucy's Toy Shop, newscasters, cartoon characters like Tom Terrific, toy soldiers, floats, marching bands, and elves. Inside the store, Christmas music played, and Santa worked on the 6th floor, entirely filled with a huge toy department.

An auditorium on the toy floor was decorated inside with a winding path of Christmas scenes on the walkway walls: silver snowflakes, white angel hair, and artificial snow on silver trees.

Characters from Toyland and the North Pole greeted children, and Santa was always a nice gentleman, and I was excited to see Mr. Talking Tree, a TV character who was friendly to all the girls and boys. He was our friend.

Candy canes were distributed, and a Christmas show was performed on a stage. The kids could go to the annex at the Town Street curb level entrance and shop at the children’s store for gifts for their parents. The door was so short that adults could not enter!

From Lazarus to the Westerville Parade

Since the closing of F & R Lazarus, many Columbus area families and visitors attend suburban Westerville's Christmas Parade, foot race, and other activities.

The Rudolph Walk/Run 5k is held annually before the annual Westerville Christmas Parade with the Sertoma Club. Runners and walkers receive a Rudolph nose and Santa hat with registrations and can wear them as optional running apparel. The run is sponsored by the Westerville Sertoma Club and the Columbus Running Company Charity Fund.

The goal on the first Sunday in December at 1:00 PM is to have hundreds of Rudolphs running or walking ahead of Santa's parade to show him the way to the children of Westerville.

Many family-oriented activities involve eateries and stores that will be open for business. The Westerville Library is on the route, as is Half Price Books. Also look for nearby churches to be having special services and Christmas Gift sales. 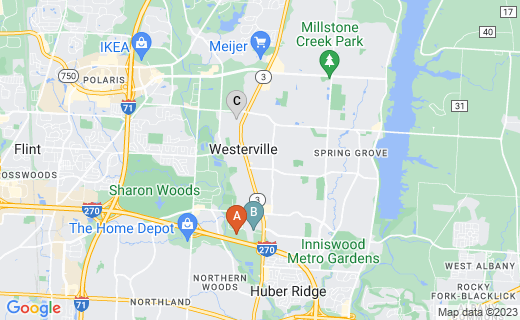