I have always enjoyed history and in my writing I try to capture the story involved in the historical events I write about.

The large, Victorian style, home belonged to King's maternal grandparents and was located in an area, known as Sweet Auburn, in the center of Atlanta's black community. King grew up in this home with his family, which included grandparent's and other relatives.

Two blocks down from the family home, at 407 Auburn Ave, is the Ebenezer Baptist Church.

The Ebenezer Baptist Church was founded in 1886 by the Rev. John A. Parker with a congregation of thirteen. Reverend Parker struggled to keep the fledgling church going until 1894 when he stepped aside and the Reverend Adam Daniel Williams replaced him as pastor.

When the Reverend Williams assumed his duties on March 14, 1894 the congregation had seventeen members officially listed on its membership roll.

Like his grandson, Martin Luther King Jr., after him, Williams was a charismatic speaker whose preaching attracted and inspired people. Utilizing his speaking and other talents, Williams was able to attract sixty-five new people to the congregation during his first year as pastor.

Under his leadership the congregation of Ebenezer Baptist Church continued to grow steadily as evidenced by the fact they twice had to build and move into larger churches to accommodate their growing numbers.

The second move was to the present Ebenezer Baptist Church at 407 Auburn Ave. the building of which was completed in 1922. It was at the present church on Auburn Ave. that Reverend Williams' son-in-law, Martin Luther King Sr., joined him as assistant pastor in 1927.

Throughout its history the Christian Church, like its counter parts in some other religions, has had to deal with people's material as well as spiritual needs.

Many of today's institutions – schools, libraries, hospitals, orphanages, social service organizations like the YMCA, etc. - were started by the Christian Church.

The message of the Church – love of neighbor, equality of all before God, etc. - has also served through the centuries to restrain tyrants and advance the cause of human freedom.

Williams Concerned With Material, as Well as Spiritual Needs of His Flock

When the institution of slavery was abolished following the Civil War, some of the first leaders to emerge among the newly freed slaves were those who had assumed the duties of preachers during the era of slavery.

The Fourteenth Amendment to the Constitution (which was added in July 1868) along with various post Civil War Federal Civil Rights laws guaranteed the basic rights to all citizens including blacks.

Passing laws is one thing, actual enforcement is another. If officials elect not to enforce a law, then the law is nothing more than a piece of paper with writing on it.

When government officials, at the Federal, state and local levels, choose not to enforce laws guaranteeing the rights of former black slaves, it was local black churches that stepped forward to help the former slaves.

Black churches became the center around which were built the communities necessary for blacks in the South to survive and prosper within the discriminatory environment in which they found themselves.

In the post Civil War era of segregation and Jim Crow laws in the South, black churches became the center of black community life.

Like other black pastors, the Rev. Adam Daniel Williams worked tirelessly to enhance the material as well as the spiritual lives of both his flock and the black community as a whole.

In the late nineteenth and early twentieth centuries two black men emerged as leaders on the national scene.

While both of these men promoted ways to help blacks improve their lives and overcome segregation in the South, their messages were different.

Booker Taliaferro Washington, who was born a slave in 1856, devoted his life to teaching. He established schools for where blacks could to learn trades and and how to build businesses.

Washington also lectured extensively on the need for Blacks to advance themselves through education and the creation of black owned businesses.

His was essentially a self help movement that not only helped many southern blacks to improve their lives but also created the infrastructure for the black community that Martin Luther King Jr. and others later led to victory over segregation and the Jim Crow laws.

DuBois was born in Massachusetts in 1868 and devoted his life to helping blacks achieve equality through social activism and the mounting of legal challenges against laws that relegated blacks to second class citizen status.

Like Booker T. Washington, DuBois stressed education for blacks but his emphasis was on a classical education emphasizing literature and the arts rather than on business and the trades.

It was DuBois who put together a like minded group of both African American and white supporters to found the NAACP (National Association for the Advancement of Colored people) in 1909.

Using the strategies of both Washington and DuBois, Williams encouraged the formation and growth of black businesses as well as urging his congregation and other members of the black community to save and purchase their own homes.

Reverend Williams led the black community in political fights to obtain schools and other public accommodations for blacks.

In 1917 Williams joined other community leaders to form the Atlanta chapter of the NAACP. In his first five months as leader of the local NAACP he increased the chapter's membership by 1,400. As leader, he also launched a major effort to register blacks to vote.

By this time Martin Luther King Jr. was already known throughout the world as a leader in the Civil Rights Movement in the U.S.

Like other great leaders in history, Martin Luther King Jr. did not appear from nowhere.

Also, like his father and grandfather, he organized, encouraged and agitated to keep advancing the cause.

The stage was set, the time was ripe and Martin Luther King Jr. willingly accepted the torch from his predecessors and led the movement forward to victory. 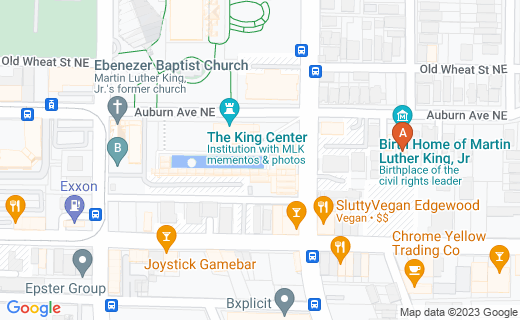