Memories of Farming With Dad: Those 35 Acres Across the Road

Paul grew up on a farm where moral virtues such as hard work and honesty were cherished. Each of his classes has a moral lesson.

Father's Day and Those 35 Acres Across the Road

Since living in Thailand shortly after the death of my father, Father's Day has not meant that much to me. The Thai people celebrate their Father's Day on the occasion of the birthday of the King of Thailand which is on December 5. I wasn't even aware that Father's Day was on June 17, 2012, until I started to see a spike in traffic for the hub I wrote in 2011 in memory of my father's passing away in 2004.

On Father's Day 2012 after talking on Yahoo Messenger to my sister in Wisconsin, I started to think a lot more about dad and some of the experiences we had farming the land. When Pat told me that a neighboring farmer wanted to buy 35 acres of my late parents' estate which was across the road from our old farmhouse and barn, my heart skipped a beat and I felt very sad that ownership was going to be transferred so soon. The memories which I have of farming that land with dad for so many years are priceless.

Those 35 Acres: Memories of Dad as a Boy

In March of 1957 dad and mom bought a 116-acre farm in southeastern Wisconsin. Most of the land, 79 acres, including the farm homestead was situated in Walworth County. The remaining 37 acres were located across a narrow township road in Racine County. Except for two acres, 35 acres was choice farmland. The land ran from the township road almost all of the way back to the old Sioux Line railroad tracks. The following includes my most vivid memories of the early years:

1. Picking Stones From the Land

During the first year we worked the land, I remember dad plowing up so many big stones. Some of the rocks were so big that we needed to put a chain around them and with the aid of a tractor pull them out of the ground. Before we could do any planting of crops, we had to take a big flat wooden stone boat and go around the fields picking up the biggest stones.

After all of the land was worked up and smooth, dad would first plant oats and seed alfalfa in late April. Then, after the last frost, dad would put in the corn around the end of May. Growing oats was easy; however, the cultivation of the young corn plants was necessary because dad didn't spray for weeds at that time. This was a tedious process when the corn was short and young because you didn't want to cover the plants with the ground as you dug up the ground around them with a two-row cultivator mounted on a tractor. After dad showed me how to cultivate, that became one of my primary jobs during the summer.

3. Playing Baseball on a Farm Field

How can I forget the summer of 1957!!! The Milwaukee Braves 30 miles away were in first place and they eventually became World Series champs by beating the New York Yankees. I loved baseball, and that summer the neighboring farm kids, others from the neighboring village of Honey Creek, and I all decided that we would have a team and play games against kids in other farming communities. Since we didn't have a ready-made little league diamond, we made our baseball diamond on a recently harvested oats field. I remember that it was a home run when a hit ball landed in the cornfield beyond right field. The highlight of the game was when we all quenched our thirst by drinking Kool-Aid from an eight-gallon milk can.

Dad didn't have any harvesting equipment during our first years on the farm, so we hired a neighboring farmer to bale our hay, harvest the oats, and pick our ripe corn which we didn't chop up and put into the silo. The hardest work was pulling a flat-bed wagon with a tractor and going around the field to pick up 50-60 pound bales of hay and stacking them on a wagon. Many times I did this myself because dad had a full-time job working as a millwright in the city.

During the winter after corn picking was finished, I would take the manure spreader every day and spread this organic fertilizer taken from the barn on the cornfields across the road. The ground needed this natural nutrient in addition to the chemical fertilizer we used when planting.

Those 35 Acres: Memories of Dad as an Older Adult

After going away to college and moving out of Wisconsin for employment, I only got the chance to visit my folks during a week or two in the summer and occasionally during the holidays. While I was home, dad always seemed to have me busy on those 35 acres across the road. Some of my most vivid memories are the following:

While I lived in Maryland, I would drive back to Wisconsin and spend a week with my parents who were a one-half mile north of the village of Honey Creek. During one particular year, dad was baling and storing in the haymow of the barn 500-800 bales of hay which came off the 35 acres across the road. Dad had his baler then, but it was necessary to hook a wagon behind the baler and collect the bales and stack them on a wagon. Since I was the younger one, it was my job while dad drove the tractor and baled the hay. Stacking the bales of hay on the wagon was only half of the job. The dirtiest and hardest part was unloading the bales from the wagon and stacking them up in the haymow. I did the stacking while dad put the bales on an elevator which slowly moved the bales on a linked chain into the upper reaches of the haymow above the lower part of the barn where the cows were kept. We must have spent 2-3 days bailing all of the hay and stacking it in the barn just before a great rainstorm hit.

Five years before his death, dad was still a very active farmer. Although he had long sold all of his cattle by this time, he still enjoyed growing oats, soybeans, and making hay during the summer. At the end of July 1999, I returned home again for a visit. It seemed to be the hottest day of the year, and after arriving in Burlington, Wisconsin, after a 14-15 hour drive, I glanced at a thermometer outside of the Bank of Burlington. It registered 104 degrees. The heat was bad enough, but also, the humidity seemed to be close to 100 percent. When I stepped out of my air-conditioned car, it was like being in a sauna. Upon getting back home 20 minutes later, dad and mom were complaining about the unusual heat and humidity. Just the same, dad had plans for harvesting his oats the next day. Dad had all the equipment he needed for the harvest since he had recently purchased a used combine and a mobile grain storage box. The only problem was that the combine had some very loose belts operating important parts. These belts seemed to come off of their pulleys and flywheel numerous times while we were combining 15 acres in a field across the road. It was so hot and dusty walking behind that old green combine, but we eventually did get all of the oats harvested and into the grain box. I never saw dad so happy!

During the times I wasn't at home, mom and dad suffered three mishaps in their later years. Dad cheated death twice while working on these 35 acres. On one occasion in the late 1970s, his tractor tipped over while on a steep embankment in a field. Dad was fortunate in that although he was trapped under the wheel of his tractor, a neighbor soon came to his aid and he escaped unhurt. On another occasion, he was making hay with my younger brother in the early 1980s. My brother, Philip, was driving the tractor while dad was stacking hay on a flat-bed wagon. The wagon shook when it went over a fairly big stone causing dad to fall off. According to my brother, dad looked bug-eyed when coming to his aid, but he escaped with only a couple of broken ribs and no other injuries.

During the ten years preceding his death, dad always planted a half-acre garden on part of the 35-acre land site directly across from the farmhouse. He grew very good tomatoes, sweet corn, potatoes, beets, beans, and other vegetables. In 2000 when there was a drought, he ran a hose through the garden for watering his plants. Ma tripped over the hose that summer fell, and broke her hip. She also started to develop symptoms of Parkinson's disease in that year.

In September of 2013, these 35 acres across the road were sold in settling my parents' estate. It won't be the same now that the land belongs to someone else. There is compensation in the fact that a farmer is buying the land, and he will be planting crops just like dad did. This makes me feel much better than selling the land to a developer who would subdivide the land and then houses would be built.

I made a trip to the States at the beginning of October and was able to see those 35 acres again. A buyer has been found and we are now waiting for the lawyers to draw up the necessary deeds and paperwork. I went into the old farmhouse with my sisters and it was strange not seeing mom greet us at the door. As much as we hate to admit it: we can't go home again.

The sale of the 35 acres across the road has still not gone through yet. For some reason, our lawyer who is handling the estate sale, and the buyer's lawyer have been dragging their feet in this matter. The farmer who plans on purchasing the land wants to plant his first crop in about 90 days from now. My sisters will not be selling the tracts of land which they inherit, so there will be someone to watch over what is happening to the land.

Those 35 Acres: one-half mile north of post office on the right 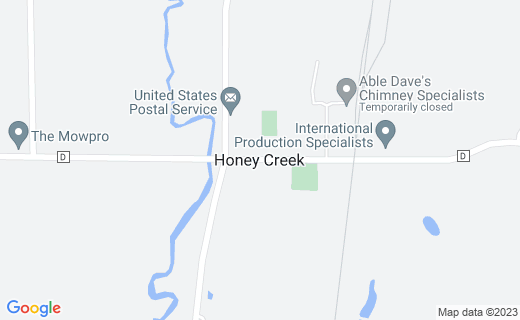 The sale of the 35 acres across the road finally went through in August of 2013. Mr. Schmidt, the buyer, was the same farmer who had waited patiently for over a year. The land has yielded good harvests of corn over all of the years.

Memories of Farming with Dad

Cast your vote for Memories of Farming with Dad