As you will see below, you can also get a really big inflatable Thanksgiving yard decoration if you want to, and they're for rent in some cases. You'll be amazed at what it looks like in the photo.

Most people aren't that ambitious though, and so I included a number of photos of outdoor Thanksgiving yard inflatables which the majority of hosts would love to have. Some are small enough to put indoors as well if you prefer that. But it is fun to display them outside for everyone to enjoy.

So let's get going with these Thanksgiving lawn inflatables and get a look at what's out there to get to enhance your Thanksgiving experience and decor.

I like this particular Thanksgiving yard inflatable because it could be put out for the entire fall season, as it also has a touch of Halloween and the season itself.

Don't be fooled by the scale of the photo, this inflatable is actually four feet high.

In these next three photos we see the more traditional idea of a turkey with the yard inflatables, and while modest in look, still work really great and would fit with just about anyone's Thanksgiving décor.

Also consider that these are about four feet tall as well, so try to picture that when looking at them.

I really like the next two Pilgrim yard inflatables, as they are unique and very enjoyable to look at in my opinion.

How cool is this airblown turkey football player? Now this not only goes with the fall and Thanksgiving season, but you get the additional football season to make everyone happy. It doesn't get much better than that.

Last but definitely not least is this 25 foot high giant turkey inflatable. You don't have to buy this if you don't want to, as it is available in some markets for rent.

Now you know it's highly unlikely that anyone else in your neighborhood would be able to compete with this giant turkey, and so will draw the attention and delight of your family, neighbors and those who want to see the great turkey.

This would be really fun to have if you have the room. 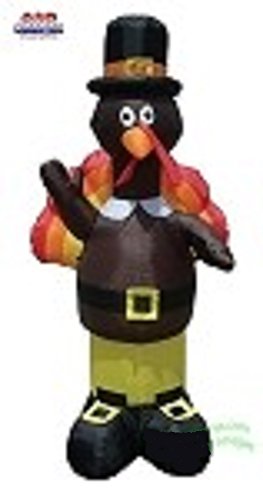 As you can see from all these fantastic inflatable Thanksgiving yard decorations, you can really make your yard look great with them. There is just about every size you could want, starting with those on top which stand at about four feet tall, and going up from there.