The Storm Makes An Impact

On Friday, June 29, 2012 in Fort Wayne, Indiana, many were heading home for the day, people were busy preparing dinner, picking up kids from after school events or just out enjoying themselves. Even though the heart of the Midwest is accustomed to storms during the months of March through June, this super cell storm was not expected nor did it give people time to prepare for it's fury.

As it hit, ninety mile-an-hour winds and driving rain pelted the city and blew trash cans and small furniture into yards, and tore tiles off roofs. Over five hundred trees were downed and they affected the power of 30,000 homes in the Allen County area. This was not good for the people who had to face the grueling heat during the following days. The entire area looked like a war zone.

One homeowner, reported that she had barely entered her kitchen from the garage when she turned to see the overhead doors buckle. The violent wind howled as it picked up speed, the sky turned black and hail began to hit her dining room windows. She grabbed her purse and headed to her basement to take cover. All she could do was pray and hope that she and her home survived the storm's destructive power.

Indiana Michigan Electric advised residents the power would be off until Wednesday, July 4th or later. Neighborhoods began to check their homes to ensure they were safe. People ventured outside to pick up debris, fallen limbs, and repair damage to windows, siding and roofs. At dusk, homes resorted to lighting candles and using flashlights as night fell upon the city.

The next day people began to post their status on Facebook and Twitter. There were notices of how homes were dealing with the loss of electricity, especially of concern was the food beginning to perish due to no refrigeration. Some issued help for neighbors with small children who had little means of feeding their family, elderly who required assistance and others with medical needs. Others sought help in cutting trees which had landed on homes and cars. Streets were blocked by trees making passage impossible to and from the neighborhoods.

A Community of Survivors

The Midwest has been called the heartland of the US and this storm proved the people of Fort Wayne had earned this title. As the community began to respond to requests for help, many were grateful for the kindness of strangers who took time to prepare meals, help cut trees and offered to refrigerate food. No one asked people to respond, it is simply the nature of the those who live in this area. When it comes to disasters, everyone is a neighbor.

The city could have cancelled the July 4th celebration. Without power, it was a big consideration for the people in the community. However, the decision was to celebrate the fourth as many needed a reason to gather to celebrate surviving the storm. After all, this is what the Fourth Of July is all about: Americans who have withstood hardship and gained freedom to live in happiness and peace. God bless America!

Tornado Safety: Signs Of A Super Cell Storm or Tornado

Here are some important facts to keep in mind when the spring season begins. Some tornado and super cells happen without prior warning. Knowing what to look for will help you to move to safety before it hits.

Those who live in the Midwest area, such as Fort Wayne, are familiar with these signs of storms, but it is always a good idea for everyone to have them posted somewhere in the home for reference.

It's A Celebration Of The Heart! (Courtesy of Vortex Interactive Studio) 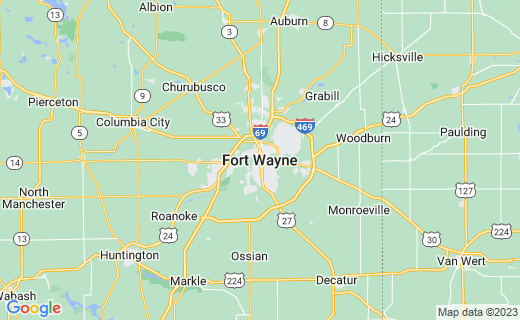