Mystics of Time is the BEST!

Two to Parade, One to Watch

Parades appeal to different people in different ways. It's said locally that it just takes two to parade and one to watch. For me, quality of throws and large crowds are the most important. Others may prefer locally-made floats with creative costumes. Some enjoy not being jostled by the crowds; most day parades will fulfill this requirement. I am mainly talking about the main Mardi Gras weekend. However, if you enjoy the prior weekend, you will LOVE the Inca parade on Friday night. They make it rain banana moonpies since they rather look like a sun. I love banana moonpies. I also enjoy the Mobile Mystics during the daytime.

I am not a fan of the ladies' parades; they don't throw very well. The best ladies to watch are the previous weekend on Saturday night: Maids of Mirth and the Order of Butterfly Maidens. Both are smaller groups but the Maids of Mirth, or the MOMs, have great floats with fabulous costumes. The Butterflies began featuring lighted butterfly puppets several years back. There are other great ladies' parades but they are on weeknights. Order of LaShe's and the Order of Polka Dots are great, large parades on Tuesday and Thursday the week before. While they are wonderful and worthwhile parades, it becomes difficult on school nights. It's no coincidence that, for most people, coming in for the last weekend of Mardi Gras, is the big time of parading.

Throw Me Something Special

Like any of the other Gulf Coast Mardi Gras cities, Mobilians have their preferences. All paradegoers enjoy being singled out and receiving a special throw. Any larger than normal beads are a special throw. Moonpies, even ramen noodles are welcome. I give bonus points to groups that throw generously. You know you are special if you get a peppermint or peanut butter moonpie! There are quite a few people who will mow you down for moonpies. Stuffed animals are quite in demand, with the trend of old, used ones being unfortunate, unless you catch a cleaned Miss Smurf. Lately, with the New Orleans

Saints' Super Bowl win, Saints items are popular. Interestingly, doubloons lay untouched on the ground when thrown. They are not very popular here like they are in Biloxi, MS or New Orleans. Catching a rose from a marshall riding horseback is special, but we don't have the walking groups like Mississippi and Louisiana do. There are no kisses from the walking groups, sigh. Sometimes, accidental items are thrown: wedding rings, iPods, and

jewelry have been known to be caught.

In Mobile, Wear a Hat But Most Don't Wear Masks On the Street 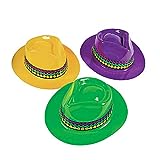 Friday night: The Crewe of Columbus, a large men's group generous with throws. I love the three ships of Columbus at the front. It's a great parade.

Saturday night: The Mystics of Time, the favorite parade of all Mobilians due to the fire-breathing dragon emblem floats at the beginning. A large men's group, in my opinion, the most generous with throws. This is, in fact, strongly encouraged. Go big or go home is apparently their delightful motto, and I approve. Floats designed by New Orleans company- money is spent liberally to create an amazing parade. You'll also find the most branded logo items in this parade. Ask anyone in Mobile who is truly the best parade- they'll say MOT. (see poll below)

Sunday Day: Joe Cain Day, or the People's Parade. Uniquely Mobile, but it is certainly the wildest day. Make sure you get a black rose or black beads from the Widows of Joe Cain. You can see the Widows around 10 a.m. at the Church Street Cemetary visiting Joe's grave before hopping on the parade. A newer walking group addition has been the Wild Mauvillians, based on a now extinct Indian tribe that the Spanish,under Ponce De Leon, encountered.

Monday night: Infant Mystics Parade, one of the older men's group from 1869, decent throws but could do so much better. Interestingly enough, supposedly made up of wealthier Mobilians. If so, maybe the Recession has hit them hard. That or the family money is long gone. However, they throw better than OOM.

Tuesday Day: Knights of Revelry, dates from 1874. This is my favorite daytime parade and they have great throws, with plentiful amounts and a wide variety. They get that they are expected to throw generously! Gorgeous blue and silver colors glisten in the daylight. The ladies you see wearing hats and suits are the guests at their afternoon reception in the Civic Center.

Tuesday Day: King Felix III parade, this has the king and queen of the Mobile Carnival Association on board with their accompanying cute pageboys.

Tuesday Day: Comic Cowboys parade- This is an old and interesting satirical group that locals love for their witty jokes about local newsworthy events. Don't expect elaborate floats; these are built simply to showcase their satire. The group has been poking fun since the 1880's. Queen Eva is selected for "her" beauty from the group's most handsome men!

Tuesday Day: MAMGA (Mobile Area Mardi Gras Association) , I have heard, has loads of throws but I always have to miss it. I have seen them in other parades, like Senior Bowl, and they threw whole boxes of moonpies. Very generous. It's said that they are THE most generous. Yesterday, I saw a couple buying $2000 dollars worth of throws at Toomey's!

Tuesday Night: Order of Myths, the oldest parading men's group, dates from 1867. Rumor has it they are the remnants of the Cowbellions, who sent Mobile men over to help begin Krewe of Comus in New Orleans. Last parade of the season; honestly, this is one I can miss. You can't miss it, though, because it's tradition. Many people love this parade, though. Before electricity, men walked beside the float to light them up with their flambeaus. They still do this. They do have interesting floats that look homemade as the original must have been, and the famous emblem float of Folly chasing Death around the broken column that supposedly symbolizes the Confederacy.

Why can I miss this? Simply put, they aren't generous at all; surprising since they are an ultra exclusive society. Perhaps they aren't familiar with the term noblesse oblige. Truly, the throws are at a trickle and there aren't many floats. Every year they are sitting on top of their floats, usually with their masks up, a true Mobile Mardi Gras faux pas. Worse, they are not throwing anything. Last year,2013, they disappointed the entire community by cancelling the parade because of a bit of rain.

I'm hopeful that this year they will regain my good opinion, parade-wise. The good news is they are awesome, party-wise! They no longer have a ball but there is a fun afternoon reception that is outdoors on Joe Cain Day.

These are by no means all the parades, just my favorites. I've tried to give the best ones for the main weekend, but in Mobile, Mardi Gras begins two weekends before the big Mardi Gras weekend. If you are in town for the 1st weekend of Mardi Gras, I really enjoy the Conde' Cavaliers' parade on the first night, which is Friday. They pack in their members on large, beautiful floats and they throw a lot! Most of all, enjoy yourself and buy from a food vendor some chicken on a stick or a funnel cake and get ready for the best people-watching around!

What is your favorite Mardi Gras parade?