The Legend of the Easter Fires in Fredericksburg Texas

While Easter traditions in other small towns might include parades and photo ops with the Easter Bunny at the local mall, for several decades (off and on), Fredericksburg Texas has celebrated Easter by lighting fires, and the whole town turns out for the event.

Fredericksburg is located in the Hill Country, on the edge of Central Texas, slightly more than an hour outside of Austin. The town is known for its German heritage, for the Nimitz museum, and for great German food. But it's also known for one of the most charming and silly Easter festivals ever created, the Easter Fires.

Almost every year, since 1948, hundreds of townsfolk dressed as pioneers, Indians and, yes, Easter Bunnies to recreate the story of how the fires became a local legend.

However, the origin of the Easter Fires and the legend the festival commemorated isn't entirely one of bunnies and baskets of candy. Instead, it stems from a tense night during the early days of settling the area, when relations with local Indians weren't yet calm.

The History of the Easter Fires in Texas

In the 1840s, Germans migrated to Texas in increasing numbers. When they got to the beautiful Hill Country, a community of the immigrants decided to settle and begin farming. Along with finding themselves in one of the most scenic areas of the state, they soon learned they were deep into Comanche territory. Although a treaty was eventually struck (one known for bringing peace to both sides, with neither party violating its terms), there was considerable fear and tension when the settlers first moved into the area.

Comanche leaders were understandably guarded and not yet trusting the newcomers, after their previous encounters with people from the Old World. Although the Germans seemed primarily interested in building homes and farming the land, they were watched warily from the hills surrounding the new settlement. Leaders of the new settlement arranged a meeting with the tribal chiefs to discuss a treaty, while the settlers below watched the hills in fear, waiting for a sign that they were safe.

As the story goes, Comanche scouts watched from a distance and communicated through smoke signals sent from hill to hill. Eventually, the legend claims, a treaty was reached, and the signals indicated all was well. However, the settlers, seeing the fires and smoke, didn't know the meaning of the signals, which increased their tension.

According to the legend, as the fires burned in the distance, and the sky filled with smoke, a young mother created a story to calm her terrified children. The children had seen the gigantic Jack Rabbits for which Texas is known, and since the family was from Germany, the mother wove a tale combining a German tradition of lighting fires at Easter with the large rabbits.

The fires were for Easter, she told them, and the rabbits were boiling water to dye eggs. Then she encouraged them to go to bed and await the eggs they would get in the morning.

Whether the story is completely true or not, the legend continues that upon the return of the menfolk from the treaty meeting, the new town indeed had reason to celebrate, and the next day's events included colored eggs, hidden for the children to discover amongst the trees, brush and cacti dotting their new homeland.

The Easter Bunny Left Carrots by the Road

How the Easter Fires are Celebrated in Central Texas

The story of the Easter Fires soon became entrenched in the folklore of what would become Fredericksburg. By 1948, a pageant was created, complete with a script and parts for hundreds of people, who would play the Indians, settlers, and best of all, the bunnies.

Several years ago, a group of friends and I drove out to Fredericksburg to see part of the pageant. I confess we were skeptical, and expected something a bit schmaltzy. It was indeed a somewhat schmaltzy festival, but one so fun and tongue-in-cheek that it beguiled you in its innocence and abandon.

Our favorite part was when we learned that many dozens of people donned full rabbit costumes to play a part in the festival. The Indian outfits and the pioneer clothes were entertaining as well, but the rabbits? Priceless.

We drove around for a while, and then stopped for dinner. While we dined, we visited with some of the locals while we had terrific German food at one of the many restaurants for which the town is known. Oh yes, we were assured, the Easter Fires pageant and celebration was for real, and even the most stoic of Germans in the area could be convinced to don ears and a fluffy tail each year.

As we left town, we stopped at an overlook above the pageant site, just to see how it looked from a distance. When we got out of the car, we found absolute proof that there is, indeed, an Easter Bunny.

There, lying on the ground at the edge of the road, was a bunch of carrots, complete with the greens still attached.

How to get to Fredericksburg, Texas 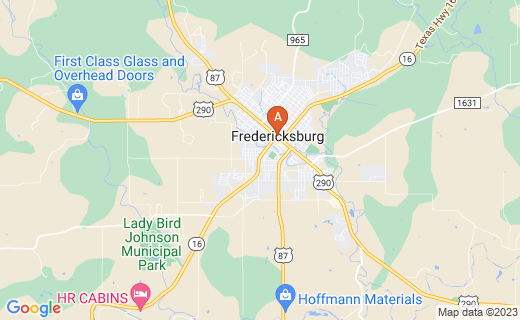 Fredericksburg, Texas is about 70 miles southwest of Austin, in the Central Texas Hill Country.

Easter Fires Have Returned to Fredericksburg

Around 2005, the group sponsoring the huge pageant production discontinued it, due to the huge expense and logistics of putting on such a major event with few resources (other than a town full of people who were more than happy to dress like rabbits).

Recently, though, Central Texans were happy to learn the festival would be revived. The legend of the fires is a beloved story, and Central Texans are proud of the fact that Austin isn't the only city known for having a bit of weird and whimsy. Fredericksburg gets my personal vote for having the coolest Easter celebration I've ever heard of.

The Fredericksburg Events Calendar is a good source for the latest information on this year's Easter Fires.