Guru Gobind Singh also declared and passed on the Guruship after him to Guru Granth Sahib, the Holy book of the Sikhs and the eternal living 11 th Guru of the Sikhs for all times to come.

Guru Gobind Singh was a saint, soldier and poet, who wrote many religious texts, rolled into one.

Guru Gobind Singh lived for a mere 42 years, became a Guru at the age 9 following his father Guru Teg Bahadur Sahib courting death and attaining martydom to save the Hindus who were being forcibly converted to Islam by the Muslim rule.

This martydom had a deep impact on the young Gobind Rai who later on was to instill, in the minds and hearts of the oppressed, fearlessness and the courage to fight injustice and oppression, by founding a new religious order, the Khalsa Panth, the baptized Sikhs

Guru Gobind Singh was born as Gobind Rai, on 22 December 1666 at Patna, in Bihar state of India. He was the only child of the ninth Guru, Guru Teg Bahadur Sahib. His mother's name was Mata Gujri.

The early years of the young Gobind Rai were spent in learning Persian, Sanskrit and training in martial skills, playing mock battles with his playmates and becoming adept in riding, swimming and archery as well. This was but a preparation for the larger real life battles that were to be fought later against the Mughal oppression and tyranny.

The Background To The Battle With The Mughal Rule

The Hindu religion then was the target of the Mughal Emperor Aurangzeb, who wanted to make India an Islamic state and to this end wanted to start converting the Brahmins of Kashmir to Islam first so that if the leading sect in the Hindus were converted, the conversion of the other Hindus in the rest of India would become very easy.

These Kashmiri Brahmins approached Guru Teg Bahadur, narrated their plight and wanted the Guru's help in this regard. When asked by the young Gobind Rai why his father was in a pensive mood, the Guru replied that the time had come for a worthy person to lay down his life for a noble cause of saving a religion.

Gobind Rai's insisted that there could not be any worthier person than Guru Teg Bahadur for this sacrifice. Guru Teg Bahadur then asked the Brahmins to convey to the Mughal rulers that they would be prepared to convert to Islam, if their leader accepts Islam first.

The martydom of Guru Teg Bahadur was the result of his refusal to convert to Islam.

Guru Gobind Singh had 2 wives. Mata Jito Ji whom he was married to at the age of 11 and Mata Sundari whom he married later in deference to his family's wishes.

However after he founded the Khalsa Panth Guru Gobind Singh accepted Sahib Devi as his spiritual wife since her parents had publicly promised their daughter to him.

When she pressed for a child he told her the Khalsa were her children and thereupon named her Mata Sahib Kaur.

The Sikh Code Of Conduct

The code of conduct for a baptized Sikh includes the following:

With the initiation into the Khalsa Panth all class distinctions between those baptised ceases forthwith as they now have a common father in Guru Gobind Singh and mother in Mata Sahib Kaur and they are henceforth spiritual brothers.

Founding Of The Khalsa Panth (Order)

Khalsa means the pure ones being derived from the word Khalas meaning pure. Only those who follow the Guru's teachings and get baptized can be called Khalsa. Purity of the mind and body for a Sikh can only be attained by following the code of conduct laid out for him (see to the right).

All Sikhs , males and females, were enjoined to get baptized in order to be called a Khalsa.

The first baptism ceremony in Sikh religion was done by Guru Gobind Rai (since he was not baptized as yet the Guru was called Gobind Rai) in 1699 on April 13, the day of Baisakhi, the annual harvest festival.

The Panj Piaras or The 5 Beloved Ones

After receiving orders to congregate at Anandpur Sahib where Guru Gobind Rai resided, people numbering in thousands gathered on this day.

Addressing the gathering and drawing out his sword Guru Gobind Singh asked for a volunteer who could offer him his head, meaning be prepared to die for him. He did this five times and each time one person got up. One by one they were taken inside a tent and when the Guru emerged from the tent each time his sword dripped with fresh blood.

The five who offered themselves were:

After the Guru went in for the fifth time he then emerged, after sometime, with all the five volunteers who were unharmed and seen wearing new clothes.

They are called as the Panj Piaras or the Five Beloved Ones.

Amrit is called nectar and administration of Amrit is an integral part of the baptism ceremony.

Guru Gobind Rai poured water into an iron bowl, then added Patashas (sugar drops) to this. He then stirred this with a Khanda ( a double edged sword), all the while reciting the 5 Banis (sacred verses that are read everyday). The sweetened water so made becomes Amrit or nectar and this was administered to the five volunteers.

These five volunteers were called Panj Piaras or the Five Beloved Ones. Once these five were baptized, Guru Gobind Rai got baptized by them thus becoming Guru Gobind Singh.

Once baptized, a man adds the suffix Singh to his name while the woman adds Kaur to hers. 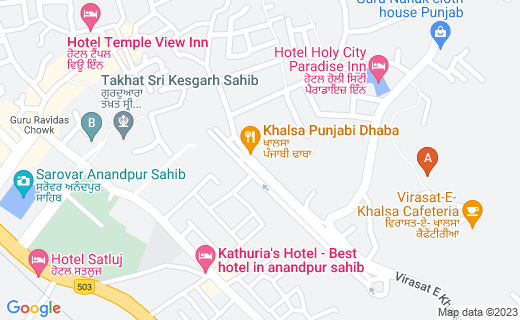 Keshgarh Sahib is the birthplace of the Khalsa Panth, the place where the first baptism of the 5 Beloved Ones, the Panj Pyare done by Guru Gobind Sing

Following the founding of the Khalsa, the Sikh unity grew in strength. This was perceived as a threat by the local Hindu rulers mostly the Rajput chiefs who saw the Sikhs as a threat to their mis-rule.

A series of battles followed, as a consequence of this perception, in which the 2 eldest sons of Guru Gobind Singh attained martydom while the 2 younger sons, under orders from the Mughal Emperor Auranzeb, were bricked alive in a wall, as they refused to convert to Islam.

Amongst all these personal losses Guru Gobind Singh remained committed to the will of the Divine saying he had returned back to the Lord what he had been given for sometime.

Ultimately one day in 1708, Guru Gobind Singh who was resting after his evening prayers was stabbed on the left side just under the heart, by one of the 2 men sent to kill him by Wazir Khan who was now jealous of the growing friendship between Mughal Emperor Bahadur Shah and Guru Gobind Singh. Emperor Aurangzeb had died by then.

Before the assailant could stab again he was struck down by Guru Gobind Singh with his sword.

The wound was stitched and was healing but before it could completely heal a strong tug one day by the Guru, while pulling the arrow on a hard bow string, reopened it.

Guruji sensed that his end was near now so he ordered his followers to collect together and shortly after this he passed on the Guruship to Guru Granth Sahib, the Sikh Holy book for all times to come, thus ending the succession of Gurus in human form.

On 7 October 1708, Guru Gobind Singh merged with the Divine.

Guru Granth Sahib is the eternal living Guru - the Shabad (Word) Guru. The text is, the Shabad, the Word.

All the text that is ascribed to the different Gurus therein has been uttered by them as being received from the Divine Being.

Guru Granth Sahib also incorporates similar utterances in praise of the Lord by other Hindu and Muslim saints.

Its message is Universal.

Bani is actually the word of God as spoken through the utterances of the Sikh Gurus. Whatever was spoken was noted down by the writers of that time.

Guru Gobind Singh was a saint-warrior as along with creating several banis he fought several battles with the cruel regime. Some of his banis and compositions are:

The Dasam Granth which is as voluminous as the Guru Granth Sahib at 1428 pages to 1430 for the holy book has all these texts and more. It also contains texts by other poets.

The Dasam Granth is rhymed poetry and the language for the most part is Braj Bhasha. Some compositions are in Persian, Sanskrit, Punjabi and Hindi.

The birth of Sikh Gurus is called Prakash Utsav or Prakash Purab meaning the manifestation of spiritual light and the birthday celebrations are called Gurupurab. Gurupurab is an occasion for prayers and recitation of hymns and remembering the Guru.

Each Gurudwara, the Sikh temple, has devotees who accompany the prabhat pheris which move around the colonies close to the Gurudwara with the devotees sing hymns. It takes about 30-40 minutes for this procession to reach the home off the person who has offered to host the prayers for the day.

After the prayers and more singing of hymns tea, milk and snacks are served following which everyone returns home. Prabhat pheris end 3 days prior to the actual birthday.

The morning following the last prabhat pheri a 48 hour non stop reading called Akhand Path, a non stop recitation of the Holy Book, from start to end, is held at the Gurudwara.

Following the Akhand Path Bhog which is the completion of the reading of the Holy Book, a prayer is held to thank the Almighty for its successful completion.

Afterwards religious singers, preachers sing hymns of and discourse on the life of Guru Gobind Singh. Sometime around 2 PM the programme gets over and langar (community food) is served.

Langar is open to all irrespective of caste, creed, race, color, status and is eaten sitting on the floor.

The birthday celebrations end with the langar.

Some Of My Other Hubs On Sikhism And Sikh Gurudwaras