Columbus was the First to Publicize the Route to New World

October 12th is the day on which Christopher Columbus and his crew first landed in the New World.

Realistically, one cannot claim that Columbus discovered the New World as the two continents had been populated by aboriginal peoples for a few thousand years prior to his arrival.

We also cannot give Christopher Columbus, or Cristóbal Colón as he is known in Spanish, credit as the first European discoverer of the New World as there are numerous documented accounts of Viking and other European voyages to the New World in the centuries before Columbus.

So, just what did Columbus accomplish?

He brought the New World to the attention of the European masses (at least those in a position of influence) at a point in time when Europe was ready to expand her horizons and connect with distant places for trade and colonization.

It was Columbus who brought the old and new worlds together in a way that changed history.

This is why he is remembered and why his achievement was of such significance.

The first recorded celebration of Columbus Day in the United States took place in New York City on October 12, 1792 when a group known as the Columbian Order held a parade to celebrate the 300th anniversary of the landing of Columbus.

The Columbian Order was a political organization that was also known as the Tammany Society which in later years morphed into the corrupt political machine known as Tammany Hall.

A little over a half a century later, in 1866, following the start of Italian immigration to the U.S., another parade was held in New York City this time by Italians celebrating their link with American history.

Three years later, in 1869, the Italian community in San Francisco held a parade on October 12 to commemorate Columbus and his discovery. Just as the Irish had their celebrations and parades on St. Patrick's Day, the Italians celebrated their heritage on Columbus Day.

However, unlike St. Patrick's Day were everyone at least claims to be Irish for the day, the link between Columbus Day and Italy soon broke for most people.

While Italians may celebrate the day as a tribute to their Italian heritage, the rest of us celebrate it as the day America was discovered.

However, some people are surprised to discover that the America Columbus discovered refers to the Americas or all of the Western Hemisphere.

With the exception of the Commonwealth of Puerto Rico, which Columbus discovered on his second voyage in 1493 and which Spain ceded to the United States in 1898 following the Spanish-American War, Columbus himself never set foot on the land now known as the United States of America.

The celebration of Columbus Day day continued to spread and in 1905 Colorado became the first state to make Columbus Day an official state holiday.

In 1971 the U.S. Congress, bowing to popular demand for more 3 day weekends, voted to move the official celebration of Columbus Day to the second Monday in October.

In the U.S., Columbus Day (the second Monday in October) is a Federal holiday with all U.S. government offices closed for the day.

In addition Federal government offices, banks and some state and local offices are also closed along with some schools. Many schools and most private sector employers do not receive the day off.

Columbus' discovery led to the opening of the entire Western Hemisphere, from the Canadian Arctic in the northern regions of North America to Tierra del Fuego at the southern tip of South America, to Europe.

This opening of the Western Hemisphere led to the colonization and spread of European culture to this, previously unknown (to most Europeans at least), part of the world.

In 1917 Argentina became the first nation in Latin America to celebrate what became known as the Día de la Raza or day of the race which commemorates the fusion of European and New World peoples and cultures into a new culture and new national identities.

Venezuela followed in 1921, Chile in 1923 and Mexico in 1928 in celebrating October 12th as Día de la Raza. Other Latin American nations followed these countries in commemorating the date in succeeding years.

Statute of Vicente Yáñez Pinzón, Captain of the Niña

In the Bahamas, where Columbus first landed, the holiday is known as Discovery Day.

Discovery Day is also celebrated in Haiti, but here the holiday is on December 5th instead of October 12th since December 5th is the day on which Columbus first sighted the north coast of the island of Hispaniola.

In the Dominican Republic on the eastern half of the island, which Columbus visited a month later on his first voyage, the October 12th date is celebrated as Columbus Day.

My Wife Posing with One of the Lions at the Base of the Cristóbal Colón Monument in Barcelona, Spain

Where is Columbus Buried - in Spain or in the Dominican Republic?

Until 1992 the tomb of Columbus rested in the Cathedral of St. Maria the Lesser. In 1992 the casket containing the remains of Columbus was moved to the newly constructed Faro a Colón, or Columbus Lighthouse.

October 12th is also celebrated in Spain, the country which sent Columbus on his famous voyage.

It was Queen Isabella of Castile (also known as Isabella the Catholic) who provided the most of the money for Columbus' voyage. Money, it should be noted, which came from Isabella's personal funds and not the national treasury).

In Spain the holiday is known as Hispanic Day and is celebrated with a huge military parade in Madrid presided over by the king and attended by numerous dignitaries that include foreign diplomats and local officials from all over Spain.

Statute of Spanish Missionary & Kneeling Indian at Base of Columbus Monument in Barcelona, Spain

Columbus Day Not Celebrated in Canada

One Western Hemisphere nations that does not celebrate Columbus Day is Canada which lies far to the north of the areas discovered and explored by Christopher Columbus. However, early in his career Christopher Columbus did serve on Portuguese and other ships engaged in trade with England, Ireland and possibly Iceland.

On these northern trips Columbus probably heard tales of lands, such as Greenland with which there was still some contact by northern European sailors at the time as well as possibly tales of Leif Erikson's voyages to what is now the Canadian Province of Newfoundland west of Iceland. Also, sailors from the west coasts of Portugal and France may have told him about fishermen from these areas who, at that time, were sailing to fish in the Grand Banks off the coast of Newfoundland each Spring. So, even if Columbus never came close to sailing near Canada his plan to sail west to Asia may have been influenced by these tales of lands to the west of Europe.

Like Columbus, John Cabot was an Italian in the service of a foreign monarch, in this case King Henry VII of England instead of Ferdinand and Isabella of Spain. Part of the funding for Cabot's voyage, like some of the funding for the voyages of Columbus came from loans by Italian bankers.

What If Columbus Had Not Made His Voyage of Discovery?

Views of Christopher Columbus differ. Like everyone, Columbus had his flaws. However, like entrepreneurs of today, Columbus had an idea and was willing to take risks in order to succeed with his idea.

Columbus didn't set out to change history. Instead his goal was to get rich by finding a cheaper and faster trade route to China and India. Europe was already trading with these places and demand was increasing for the spices and other products from that part of the world. However, the current land routes across Eurasia were not only slow but recent conquests by the expanding Ottoman Turkish Empire was blocking trade on these routes.

During the late 1300s and early 1400s European sailors had ventured westward in the Atlantic Ocean to the Canary Islands and then the more distant Azores Islands. These had been mentioned in ancient manuscripts but there had been no known contact with them since the fall of the Roman Empire. At the time of Columbus' first voyage Spain was in control of the Canary Islands and Portugal the Azores.

Location of Key Points along Route of First Voyage of Columbus 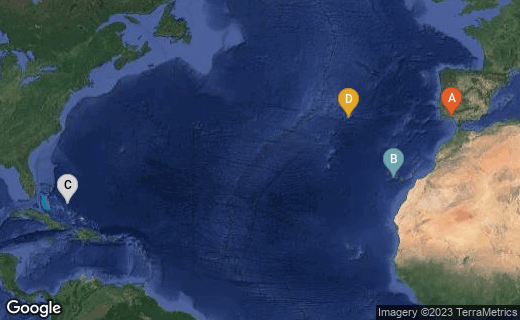 The age in which Christopher Columbus lived was a time of economic progress, increasing population and expanding trade in Europe. It was also a period of increasing knowledge in many areas including geography and cartography (map making).

In the decades before the first voyage of Columbus, Prince Henry of Portugal had devoted his adult life to collecting information and financing explorations along the African coast seeking a sea route to Asia. While Columbus was traveling around Europe seeking financial backing for an expedition to find a sea route to Asia by sailing west across the Atlantic rather than east around Africa, another Italian, John Cabot was doing the same.

On February 4th 1488, the Portuguese sailor Bartholomew Diaz and his crew rounded the Cape of Good Hope, the southern most tip of Africa. This discovery provided Portugal with a sea route to Asia.

While Diaz was forced to turn back shortly after rounding the Cape of Good Hope, another Portuguese sailor, Vasco de Gama, in 1497 retraced Diaz's route and sailed all the way to India.

1497 was also the year in which John Cabot, with financial backing from English merchants and King Henry VII of England, sailed across the Atlantic ocean and explored Newfoundland and other areas along the eastern coast of what is now Canada.

If Columbus hadn't made his successful discovery in 1492 (which was quickly broadcast around Europe) some other European would have "discovered" the Americas within a decade or less.

Christopher Columbus just happened to live in an age when Europe was ready to expand and was lucky enough to be the first to "discover" the Americas in that age.