Deciding To Throw A Birthday Party At Chuck E Cheese

I asked my daughter where she wanted to have her 4th birthday party and she enthusiastically responded "Chuck E Cheese"!

We had recently been to a Chuck E Cheese birthday party and were pretty impressed.

It's tons of fun for the kids and the parents can sit back and relax!

There are tons of games for the kids to play and tunnels and slides for them to climb in.

The pizza is excellent and they have a nice drink selection.

I went to their website and clicked on Birthdays.

I was brought to a page where I could choose the location where I wanted to have the party.

I chose the closest Chuck E Cheese to me for convenience.

I then picked a date and it gave me a list of times I could choose from.

Once I chose a time, it gave me a list of options with pricing.

I was able to enter how many kids I thought would come to the birthday party and it gave me a total.

I was able to change the number of kids at any time by contacting the Chuck E Cheese location by phone or through their website!

Once I chose my options, the Chuck E Cheese site asked if I would like to send Evite invitations out to the guests.

No need to know everyone's mailing address and buy stamps.

The Chuck E Cheese Evite system will send an invitation by email to anyone that you would like.

Just enter the email addresses in and push send.

I was even able to personalize the Evite birthday card with tons of different options!

After the Evite had been sent out, I began to get responses from everyone by email letting me know if they could make it or not.

It kept a running tally of the number of people who responded Yes, No or Maybe.

Guests were also able to leave comments with their responses.

At any time, I could add extra people to the Evite card.

It even reminded me to send the invitation out again a week before the party to those who did not respond yet.

Planning my daughter's Chuck E Cheese birthday party could not have been simpler!

A few days before the birthday party, I received a call from the party coordinator at Chuck E Cheese to go over the details of the party.

They wanted to know if the number of children had changed, the type of pizza's we would like and go over the details.

Once we arrived at Chuck E Cheese, Chuck E was there to greet us and bring hold the door open.

Our party coordinator joined us as we walked in the door.

She helped us bring in the cake and party favors, brought us to our table, gave our daughter a birthday crown (inflated with coins lining it).

They provided a beautiful balloon at the table with my daughter's name on it so guests could find our table easily.

The first 35 minutes was for free play around Chuck E Cheese.

The party package included a cup of Chuck E Cheese tokens for each child.

Our party coordinator informed us when we had to return to the table for pizza and cake.

The coordinator served the kids pizza and drinks. We were able to choose from a few different drinks.

They brought pitchers of drinks over to the table to serve the children.

While the kids were eating, Chuck E Cheese came out and put on an interactive show.

The kids were entertained while they were eating which was nice.

Afterwards, we had cake which was served by the party planner.

When the food was gone, my daughter was able to choose one person she wanted to go into the ticket blaster with.

Her friends gathered around and watched her in the ticket blaster.

The ticket blaster is a cylinder that the kids stand up in. The air whirls around and the kids inside grab as many Chuck E Cheese tickets as they can.

For safety reasons, they have the children wear safety goggles while they are in the ticket blaster.

I didn't even know those existed!

After the Ticket Blaster, the kids were able to play some more while the party coordinator cleaned the tables and bagged up our gifts. 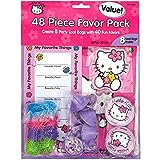 How Much Does A Chuck E Cheese Birthday Party Cost?

We bought the Basic Chuck E Cheese party which included: 2 slices of pizza per child, one drink cup per child, plates and utensils, a show by Chuck E Cheese, the Ticket Blaster, the Evite invitations, two tables for two hours, a birthday ballon, crown and medal (necklace) and the party planner.

We had 15 children at our party.

We paid $200 to Chuck E Cheese for our daughter's birthday party.

It was well worth it since we barely had to do anything.

We didn't have to prep the tables or clean them.

We were able to relax and have a good time.

We did have to buy our own cake and good bags.

I got the birthday cake at Costco for $17 and the party favors at the dollar store.

The party favors and bags probably cost me $10.

My son is now requesting that he have a Chuck E Cheese birthday party because he had so much fun!

Who Do You Invite To Your Children's Birthday Parties?