What is the History of the Easter Bunny?

Easter's roots, both secular and Christian, may actually be in paganism with the celebration of the heathen goddess Ostara, who has also been called by the names Eostre and Ishtar (both pronounced "Easter").

The Easter Bunny and a Secular Easter

While Christians celebrate Easter Sunday as the day on which their Lord and Savior Jesus Christ rose from the dead for the salvation of those who believed in Him, the pagan and secular Easters are also significant to the Western celebrations. It is clear that much of the symbolism surrouding Easter is rooted in Pagan lore, and the rabbit we remember when we think of Easter is one of these cases.

The Easter Bunny, however, is a mostly secular tradition with its roots in paganism and the symbols of fertility used by pagans in their Springtime rituals. Commercialism surrounds Easter, and all you have to do is look at your local discount store to see that big box stores and even smaller companies are making money on exploiting this holiday.

But where did this secular exploitation of what is believed to be a Christian holiday begin?

The Santa Claus of the Spring

Children know what to expect from the Easter Bunny: He comes at Easter, laying eggs in their baskets and leaving candy behind for them. While children may not make the association, you certainly can: Isn't the Easter Bunny an awful lot like a Santa Claus who comes in the spring?

Some Catholics may note that this is similar to St. Nicholas bringing candy and treats to fill the shoes of children who have left them out on the hearth for him on December 6th every year for his feast day. Indeed, the Easter Bunny may have stemmed from Christmas and St. Nicholas Day traditions.

For many children, the Easter Bunny breaks up the tedium between Christmas and Christmas, giving them something to look forward to and spreading hope. Since Spring and Easter are times that spread a hopeful message, this provides an excellent teaching opportunity for young children of the religions that recognize Easter.

"It would be difficult to argue that the bunny isn't older than Christianity itself."

Where Did the Easter Bunny Come from?

Rabbits have always been a symbol of fertility. The expression "breeding like rabbits" is ancient, and these creatures have long been associated with reproduction, which generally occurs in the spring. It is apparent that Heathen traditions in particular make use of the symbolism of the rabbit in their rites. In short, the Easter Bunny is an ancient symbol that likely pre-dates Christianity and the honoring of the resurrection of Jesus Christ. Modern pagans still use this symbolism in their practices as well, and it would be difficult to argue that the bunny isn't older than Christianity itself.

For this reason, we can assume that the Easter Bunny is a derivative of the pagan traditions surrounding Springtime fertility and the rabbits, from which we get the expression "Breeding like rabbits."

But this is really just the start. While we understand and appreciate that the rabbit itself comes from pagan lore, when did we start seeing the rabbit laying eggs in Easter baskets? That gets a bit more complicated. 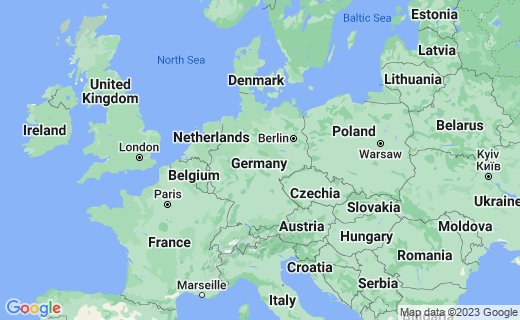 It is believed that the Easter Bunny came to the United States some time during the eighteenth century, brought to the new country by German immigrants in New York and Pennsylvania. This should be familiar to most people who understand the origins of some of our modern Christmas traditions, as the Christmas Tree also originated in Germany and came to America with Immigrants.

The early German communities in the United States were and are known as the Pennsylvania Dutch (or Deutsch, for the German language they speak), commonly known now as the Amish. This is a puritanical Christian religion in which the Amish renounce all things worldly. So what is the connection between the Amish and the Easter Bunny?

The First Easter Baskets Weren't Baskets: They Were Nests Made in Bonnets

The Amish are often associated with the bonnets that their women wear. Early Easter "baskets" were in fact nests which were built into the bell of a bonnet. Children left these nests out and the Easter Bunny filled them with painted boiled eggs.

Today children leave out baskets for the Easter bunny, or in some families he delivers the baskets and hides them somewhere for the children to find. Alternatively, children can use these baskets to fill them up with eggs at Easter egg hunts.

Which Easter eggs are your favorite?

The Easter Bunny is believed to lay Easter eggs into the Easter baskets that children leave out for him. Surely he's disappointed that they have stopped building nests for him!

Easter eggs have evolved over the years. In the past these were colored eggs which had either been blown or boiled and then which were dyed using natural elements to stain the egg's shells. They could be painted or etched as well in order to decorate them. Chocolate eggs probably came a bit later and were distributed with other Eastern candy as the traditions changed. Since then, Easter eggs are now often made of plastic and filled with small candies such as jelly beans.

Nests filled with Easter Eggs still feature prominently in Springtime decorations, cooking and symbolism. Because the egg represents new life, this is a symbol which is common both in pagan and in Christian practice, and which is appreciated in secular circles as well.

For Christians, the new life symbolized by the egg is representative of the new life in Christ, given to followers after the death and resurrection of Jesus. Pagans view the egg and its nest as a symbol of fertility and the upcoming goodness of the Earth (which some pagans worship). In secularism, the egg and its new life are symbols of the Spring and its warmth and energy.

This Article is Copyrighted to Becki Rizzuti

As you will see on the bottom of this page, this article is copyrighted to Becki Rizzuti. All rights are reserved. If you see this article published on another site, please note that this is the original. No, you may not take my work in full or in part, even if you provide a link back to this page. The original date of publication of this hub is February 27th, 2014.

Why not give a stuffed bunny, chocolate bunny, or bunny book instead? Children are sure to love these treats and will have a fantastic Easter without putting a live rabbit at risk for the sake of a few weeks of entertainment for your child.

And remember, you can always enjoy blowing and decorating eggs with your children this Easter instead! You can even make chocolate eggs from the shells!