Krzysztof is a lifelong future tech junkie investigating the latest stories from companies like Apple, Samsung, Google, and Amazon.

Why Does Groundhog Day Exist?

The best part about Groundhog Day is that it's the title of a movie starring Bill Murray and Andie MacDowell (well mostly because of Bill Murray). And that's it! There's nothing else interesting or exciting about this unofficial holiday.

I guess it's cool that it teaches us what a groundhog is and looks like so that's awesome. Lord knows how we'd survive without knowing what a large rodent looks like. Of course I'm just kidding, I love animals and groundhogs are quite adorable because they look like overgrown guinea pigs.

So there's two good things about Groundhog Day; the movie and the animal that we disturb for no reason. If you were an animal hibernating would you want some large, hairy human picking you up by the neck in front of a frightening crowd of people? I know I wouldn't.

I've honestly forgotten what the whole shadow/no shadow aspect even means anymore. I'll have to look it up on Wikipedia or something, but it always seems there's 6 more weeks of winter every year.

Oh wait that's because astronomical winter ends in mid to late March, which happens to be almost six weeks after February 2 (shocking I know). I don't think the groundhog alters when our winter ends or begins, so this result means absolutely nothing.

Sorry to sound so bitter for all you Groundhog Day lovers, but you can gladly challenge me about this day if you like.

If you ignore the fact that winter ends every March 20-21 (feel free to correct the dates if I'm wrong) ,then it still seems like the groundhog always forecasts six more weeks of winter. I don't even remember the last time he called for an early winter, and I won't bother looking it up because I don't care for this day.

I suppose if the groundhog keeps predicting six more weeks of winter then eventually they'll get it right due to probability and statistical analysis. I'm not sure what dictates the end of winter though, according to the groundhog. Is it no more snow, no more cold, or a combination of the two? Please help me understand guys!

Why Not a Squirrel?

It couldn't have been a cat or a dog that predicts the season and why does it have to be February 2? I personally would've enjoyed it being on February 1 because it makes better sense. What's so special about number two?

People fascinate me sometimes because they make a huge spectacle out of nothing. Animals have been used to predict the weather and sporting events, so they're meteorologists, climatologists, and gamblers?

What a fantastic combination!

Oh yea and some of those animals eventually end up in a stew so where were you PETA when that happened.

I think I'm more upset about the treatment of some of those animals rather than the meaningless event itself, but I have every right to be. I don't want to see a poor groundhog get scared to death by some human waking them up from a deep sleep. To me it sounds a bit inhumane.

For a holiday this meaningless it's not right to mess with nature like this. The groundhog doesn't know what's going on. They just want to go back to sleep and be left alone until the winter ends, and I feel for them.

How Do Animals Predict the Weather?

I've been a major weather and climate hobbyist for over 15 years, and I almost went to school for it. I've heard of animals being used to predict the weather, and I do believe they know something more than us humans do due to their higher sense of smell, sight, and hearing.

We've heard the stories regarding the dog that grew anxious before a big storm or how the behavior of caterpillars and squirrels may indicate a cold, snowy winter is coming.

I'll never completely discount those notions because there may be subtle hints of something that affects them. Typically those residual effects have to do with the environment they're a part of.

How does a hibernating groundhog predict the weather though?

It's hibernating so how can you tell what's going on with it. Is the fur thicker or something? I've seen statistics that stated the groundhog was right up to 80 percent of the time. Yeah when it predicts six more weeks of winter, nine out of ten times it's going to be right if you live in the Midwest or New England.

What about the south? How does that fit into the groundhog's grand weather forecast? Let's discuss further.

Does Groundhog Day Work in Florida?

What's the extent of these winter weather powers that a groundhog possesses? Is it based on location? I have so many more questions to ask that I could literally write this entire article based off of questions.

The state of Florida is a wonderful state that's filled with sunshine, warmth, and a tropical atmosphere. It clearly must have a Groundhog Day ban throughout a good 90 percent of the state.

When we think of winter we think cold and snow; when Florida thinks of winter they think not quite as hot as summer. I won't say all of Florida doesn't get cold because freezes do happen many winters sometimes all the way down to south Florida and certainly the northern third.

Snow is rare but it has occurred in Florida's history but usually during the winter months Florida is relatively warm. I guess six more weeks of winter means absolutely nothing for them, which only proves my point further. Need I go on for other mild regions and locations. 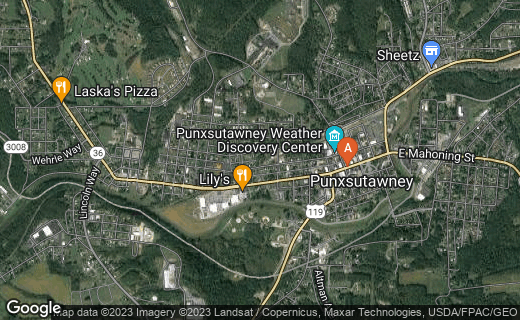 Basis of 1993 film "Groundhog Day" as well as home to Punxsutawney Phil on Groundhog Day Feb 2.

The most famous groundhog I know of is Punxsutawney Phil, and it's always an event over there. I don't know why people would celebrate this day especially if it lands on a cold Monday morning, but I digress.

I have no problem celebrating spiritual events or events based on charitable causes, but why are we celebrating a groundhog who obviously lacks any magical powers? This is neither spiritual or charitable, it just sounds unusual. Is the groundhog some sort of spirit animal that we all praise?

If that were the case, then maybe I could understand the celebrations because I'm very tolerable towards any religion or spiritual influence. If anyone can tell me that the groundhog is a spiritual animal that needs to be celebrated then let me know.

Also are the festivities just an excuse to drink and eat? I know, I know a lot of festivities have drinking and eating as their staple, but they have a valid reason to do so. This however is mind boggling.

Expect another 6 weeks of winter or should I say 3 months of winter. There's nothing wrong with hoping for a warm, snow-free winter but don't use a groundhog. Think about the poor animals and how you would feel if you were them.

If you don't agree with anything I've said then that's fine too. I know a lot of people won't take any of this to heart and having a debate about Groundhog day seems downright silly. If you're a fan of this day then that's fine, but I'll remain strongly against it.

There are plenty of accurate ways to predict the weather that are a lot more humane, and Groundhog day is both inaccurate and misguided.