Children and grandchildren have helped me understand my worth. Not much beats watching your kids and grand kids become happy and prosperous.

Due to its pure beauty and natural splendor and great weather (388 average days of sun per year), Phoenix, Arizona has an array of outdoor attractions, as well as recreational activities. The Phoenix Zoo is the biggest privately owned, not-for-profit zoo in the United States. Since being opened in 1962, this zoo has evolved into a major international standing because of its initiatives and efforts with regard to animal preservation, which include breeding as well as introducing endangered species back to the wild outdoors.

It's not unusual to want to visit an amusement venue that charges a reasonable price for entrance. And, so often, we of age don't always think about the sites nearby. I recently visited a zoo decorated with LED lights from here to a long way away. 3.5 million LEDs to be concise. But what does that mean? As of November 4, 2013, at least 3.5 million Americans had their health insurance policies cancelled under the Affordable Care Act. That is little help in understanding how much 3.5 million really is. It's a lot. Here we go. 3.5 million rounds of ammunition were ordered by the TSA in August of 2013 in order to eventually arm TSA agents. This is enough ammunition for the TSA to fire 9400 rounds every day for one whole year. Now you're getting the idea. In 2005 the entire population of Yokohama,Japan was 3,517,961; it's more than that today. OK, this will do it. 3.5 million pennies would require a space of approximately 3.5 average refrigerators to store (17.5 cubic feet in volume each on average in America).

A Fretwork of Zoo Lights

So if I told you that there is an event during the Winter Holidays that displays 3.5 million LED lights in Phoenix, Arizona, would that interest you? For 6 weeks during this season,the Phoenix Zoo decorates wire sculptures with 3.5 million lights at this time enticing thousands of visitors to wander the park in the evening - 270,000 in 2014 to be precise. Most of these sculptures are of the zoo animals, and the time to create this somehow imaginary place must have been Herculean. There are no fewer than 700 hundred displays.

Upon entering the zoo, we encountered a pool with stingrays, code named Stingray Bay. Visitors were patting the ray backs as I kept looking behind me at the glowing lights. I don't know if this is permitted (I thought it was encouraged), but it amazed me as they glided seemingly effortless through the water. Another feature of interest was a zip line ride. It was fun to just look up and watch folks take off across the park. You can't weigh less than 45 pounds nor more than 250 to get airborne.

Do You Enjoy Night Light Shows Where You Live?

Be Obliged to Take a Camera

If you are a shutter bug, don't forget your camera. As you will see from my photos, there is a lot to take in. The reflection on the water of a lighted fountain in the center of the park is magical- the color, not dissimilar to Shamu's Light Up the Night Celebration without the whale! If you need anymore convincing, Huffington Post ranks the Phoenix Zoo in the top 10 U.S. zoos and describes it as world class.

I recall 4 loop walks that one could take, each clearly marked with a sign or barricade and an arrow at the beginning. We walked all 4 in about 2 1/2 hours including a jaunt through the gift shop. The zoo displays feature the animals that are out during the day. At night the animals are tucked away in their shelters. Between all of the light at night and sound from a lot of people, it must be better for all of the creatures to be in their nighttime habitat. Having said this, I must say, with a lot of visitors it did not seem crowded. There is mega space around on the paths, and seating is conveniently placed along all of the routes. If your feet are sensitive, it's easy to find a bench and take a rest.

Some of the sculptures move, including a few replicas of insects with moving wings. There is also a dancing trees spectacle. Want to see a mechanical giraffe? The kids surely will.

In the right light, at the right time, everything is extraordinary.

Your path is illuminated by light, yet darkness lets the stars shine bright.

Though I was of the belief the theme stayed the same every year, that is not the case. Although not an absolute, themes are frequently changed. Who knows what light sculptures will be up next? And as is the case at most zoos, there are educational stops such as desert water conservation. I recall a note emphasizing the recycling of zoo maps prior to leaving. We haven't seen that at a zoo before.

It is interesting and admirable that the zoo took on the expense of using LED lights. Though more expensive, they do save a tremendous amount of energy. By using all LED lights, the zoo saves over 7 times the wattage used by incandescent mini lights.

It All Ended Too Soon

We stood and watched the dancing lights and sparkling water along with a lot of other adults, many with their little ones. Nothing could be better than the theme from the Wizard of Oz, along with a menu of other popular tunes. Now that I know about this, next year a trip with my granddaughters is a must. For directions and a map of the Phoenix Zoo, see this: http://phoenix.about.com/od/holidayevents/ss/zoolights_10.htm

And Check Out 2020 Phoenix Zoo Lights 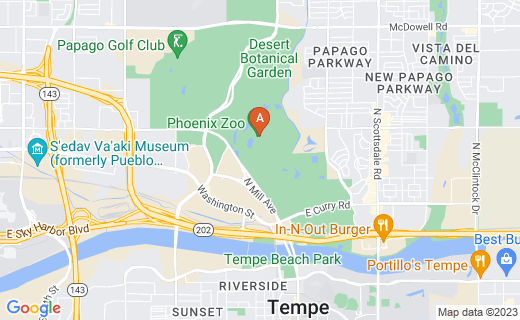