Having Fun with Afro Wigs

Afro wigs are a fun, inexpensive way to get into the Halloween spirit no matter what age you happen to be. Halloween is a great time to go a little bit crazy and to show off a side of yourself that others usually never see. You can spend a ton of money on expensive costumes if you like, but you really don't have to do that. These wigs are an inexpensive costume option that will have you, and almost anyone you come across, smiling almost instantly.

Which Style is Right for You?

Why I Love Afro Wigs

I should start by acknowledging that I realize that there are people who are looking to buy afro wigs to replace their natural curls. I get that, and many of the wigs I've found for sale would be fine used in that capacity. Obviously, someone searching out afro wigs for black women or men might be looking to replace their own thinning hair. With that said, I got interested in these wigs because I think they look hilarious on someone like me, who looks anything but natural when wearing one. I hope that makes it clear that I don't mean any offense to anyone with a natural afro.

Afro Wigs are NOT just for Halloween!

I'm usually not a big participant in Halloween festivities. I mean, if I'm invited to a party, I'll get dressed up and go have a good time, but the last time I actually hosted a Halloween party was waaaaaay back in my college days, too many years ago to admit. This past summer, a friend of mine from work thought it might be fun to have a Fourth of July party with a "different" theme. He decided to make it a 70s dress up party. Who knows where that inspiration came from? I suppose he wanted to relive his glory days or something. Not wanting to be rude, I agreed to attend without ANY idea what I was going to wear. I didn't want to spend a ton of money on a costume, so I bought a 70s afro wig and a hippie type costume to go with it. Since my husband was going to be attending with me, I ordered him a similar hippie outfit. Really, the afro wigs were an afterthought at the time. I didn't have hair long enough for braids, and my husband would have looked silly as a bald hippie!

Why I love my husband

If you were to meet my husband, you'd probably think he was a nice guy. He's your average, slightly overweight, white male in his forties. He's polite, has a job that he has been going to for years, and is actually a pretty well respected part of our community. If anything, people would probably guess that he's rather conservative. Even so, he was more than willing to dress up for the party. Everyone thought the get ups were hysterical! We had a great time. Afterwards, we went home and I packed up the 70s Halloween costumes, thinking that maybe we'd get them out again when October rolled around. My husband had other plans.

About a month later, we went on vacation with friends in North Myrtle Beach, South Carolina. It's a fun place, and more family oriented than the more heavily populated Myrtle Beach to the south. One of our favorite things to do when we go on vacation at the beach, is to hit up the local restaurants. We both love seafood. So, there I am, waiting for dear hubby to finish getting dressed so that we can go meet our friends, when he comes walking out of the bedroom sporting the afro wig I had purchased in July! I howled with laughter, but he just played it straight. He insisted on keeping it on the entire evening. Our friends met us in the parking lot of the restaurant. After a truly impressive double take from both of them, and a lot more laughing, we agreed to go through the rest of the evening with straight faces if we could. The looks on the faces of our fellow restaurant patrons were priceless. The waitress kept looking at the afro wig, and then back to the rest of us. I think she was waiting to see if one of us would start laughing. She must have had a hard time believing that the plump, hairy guy at table 14 was for real.

70s Clothes to compliment your wig

70s Clothes
Over the past few years, there's been a renewed interest in 70s clothes. Yes, those funky duds that people sometimes scoff at, have become popular again for ...

Afro Circus Wigs - Dress up like Marty from Madagascar 3!!!

There is no doubt that the movie Madagascar 3 has spawned a few costume ideas. The easiest one to set yourself up with has got to be an Afro Circus wig like Marty wears as he sings his catchy but annoying Afro Circus Song. These afro rainbow wigs have been around for a long time, but I'm sure sales are skyrocketing nowadays! 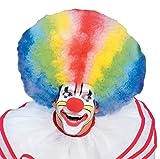 Be warned! Once you hear this song, you'll probably have it stuck in your head ALL DAY!

When I think of that evening at the beach, I still start to giggle like a schoolgirl. Maybe you had to be there, but I'm sure some of our fellow vacationers are still scratching their heads, and maybe having strange dreams about the weird guy they saw at the beach. Oh yea...Did I mention he work the afro wig to the beach the next day too? It was pretty funny but the wig protected his mostly bald head and after he took it off, his red, sunburned body made it look like he was wearing a bright white cap on top of his head. He put the wig away for the week at that point. Now that fall is here, I'm expecting that he'll be asking about the wig's whereabouts soon. I dug it out just this morning. I can't wait to see what he thinks of next!

Have you ever worn a Halloween costume out in public when it wasn't Halloween?

70s Costumes for Women
70s costumes for women can go in a few different directions, and all of them are a ton of fun! Whether you lived through that decade of upheaval and change,...