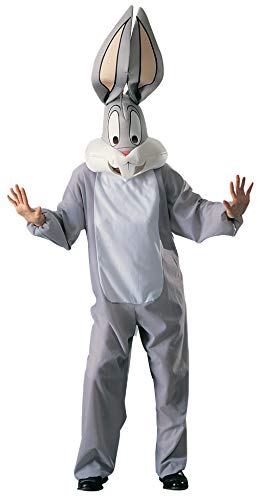 Bugs Bunny has been around for over 70 years, continuing to delight fans with his irreverent attitude toward life's various circumstances; not taking life or difficult challenges too seriously.

Over the years Bugs Bunny has also evolved into a comedian in his own right, becoming one of the most beloved and recognized cartoon characters in the world. His popularity has never waned over the decades he has been around.

That of course lends itself to great material for a Halloween or themed party costume, providing great material - not only in looks, but in one-liners that can be used to complement dressing up like the famous rabbit.

In this article we'll look at several Bugs Bunny costumes to show how he has been interpreted by those recreating the "rascally rabbit."

Most people choose to acquire or make a costume that is close in appearance to the real Bugs Bunny look.

That said, the one thing that can differentiate a little is the way the ears are made. Almost all the eyes, with very few exceptions, look the same.

As for the ears of the Bugs Bunny costume, some can point straight up, others droop or point to the side, and still others will droop to the front.

All of those wearing a Bugs costume include the white, furry stomach of the rabbit.

For those wanting to portray and even more realistic Bugs, be sure to practice some of his sayings like, "Eh... What's up, doc?," or others that would be known to his fans.

In this first photo of a person wearing a Bugs Bunny costume, we have the traditional look, which is very hard to beat.

It is funny, including that cocky smile of his that has delighted fans for many years. And for those wearing a Bugs costume like this, they are always assured of having a winner at any party; especially if it includes children.

Just be sure to be ready to interact with the little people if that's the case, as they'll swarm around you want to talk to whom they perceive as the real Bugs Bunny.

There's always one in the crowd, and it's no different here, with a man in a Bugs Bunny costume garnering a little extra attention by playing the guitar. Hey, it's no fair taking off your fur fingers. Now that would have been a real challenge.

As for the costume, this is the type that has the face on the head, presumably for those that don't like to wear something over their face.

Here's a pretty cool Bugs Bunny mask, even with his whiskers looking a little tough. I like the way the ears stick out to the side, giving the rabbit a little bit of a different look, as do the dark whiskers.

This picture of Bugs Bunny hanging around with the Pink Panther isn't bad, and if gives another look at a Bugs that is a little different than usual.

Here he has his years flopping down, something you don't see a lot of when Bugs is around.

Next to children, the cutest costumes to look at are usually those worn by dogs, and you can see why with this costume of the dog wearing a Bugs Bunny costume.

It helps that the dog posed perfectly for the shot, with the head and ears of the costume fitting exactly as it should, with the additional swagger of it lying sideways on the head.

Costumes of a character wearing another costume are always very compelling, as you can see from this costume of Bugs Bunny as a vampire, and a friendly vampire at that.

Once you make or acquire a Bugs Bunny costume, it wouldn't be too difficult to include a vampire cloak like this to create the look. Of course they can be acquired as well if you're not the crafty type.

However you do it, a Bugs Bunny vampire costume looks great.

No matter how you dress up like Bugs Bunny, you're always going to get some good laughs and significant attention, just from that funny look of the rabbit, and his delightful personality, which will be assumed by those you interact with, and will be confirmed if you're willing to learn and repeat a few of the funny lines that Bugs consistently says, and are familiar to those that are interacting with you.

So it's good idea to think seriously about donning a Bugs Bunny costume for Halloween or your next costume party.