All Types of Bunny Costumes

Bunny or rabbit costumes surprisingly, represent several different parts of culture because of the use of the imagery in disparate areas of life.

There are also bunny mascots costumes, which look very cool, even if you're not a team mascot somewhere.

Of course there are then the adorable children or pet bunny costumes, which usually (in the case of pets), entail a set of ears and a body suit of some type used to portray color, more than anything else.

For children, it's usually a hoodie type of costume with a set of bunny ears and a costume that is warm and which you can zip up. 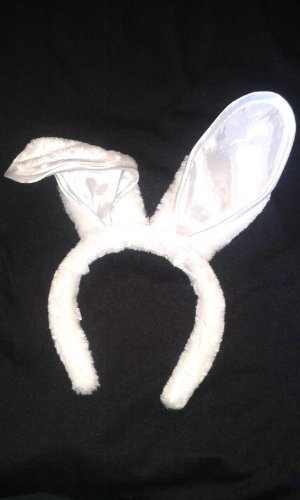 In this first photo we have the traditional idea of an Easter Bunny, with this character wearing a cute, gold vest.

It's a fun costume that wouldn't be too hard to make for a crafty person, although the bunny face would definitely be a challenge. I like the addition of the vest, as it gives a friendly, classy look to the relaxed rabbit.

Here is a funny look at Ralphie's deranged Easter Bunny, who happens to be running about at Christmas time.

The two are putting on a good attempt at imitating the nasty bunny, offering up the gloomiest faces they are able to. Pretty funny.

As you can see, this also wouldn't be too terribly hard to make at home if you have some craft skills in that direction. The most challenging part would probably be getting the zipper up the front on straight. It is definitely worth the effort.

If you're not that crafty, you can acquire one from any online or physical store that sells costumes.

Here is one of the more recognizable bunny images in the world: the Playboy bunny.

While it looks cute, it wouldn't take too much to put this together as a costume if you have a little black dress that would look good with it. Just add a cottontail and white fur on the front and you're ready to go.

Oh yeah, either buy some bunny ears or get some black and white material and design a pair. As for the rest, body not included.

Children and pets always get the most praise and laughs from adults when they are dressed up in costumes, and these two below are a good example why they do.

The little girl is a little ham, and knows just how to pose and smile right to please a proud parent taking the picture.

How much cuter could a bunny costume be than this one? With that cute smile, bow tie, wonderful bunny ears and shiny shoes, this little girl I'm sure got everything she wanted on this special day.

As for the little dog, it looks great as well. Too bad they weren't able to keep the rabbit ears up on the head of the dog, as it would have been a great picture to see.

Beauty and the Beast Halloween Costumes

A terrific idea for couples would be this awesome magician and rabbit costume, with the rabbit standing in the hat, ready to be pulled out.

This is a good practical combination, as the hat was made perfectly as far as size goes, as some people attempting the same costume theme made the hat a lot wider, making it difficult to walk about if you want to.

Of course if it's a home party, a larger hat would work great if the purpose was to be stationary and be more of a photo moment.

What a cute and simple energizer bunny costume to make. It's so awesome in its look, and a terrific conversation piece that will certainly engender a ton of laughs.

All you need for this is some rabbit ears, a pink sweat suit, a big energizer sign, and building a simple drum to place it on. How cool is that?

I included this last photo of a person in a costume riding the motorcycle in case you haven't seen it before, as it's so fantastic and hilarious. Picture the looks on the faces of people, not only seeing a costumed rabbit riding the motorcycle, which would have been funny enough, but add to that his suddenly popping a wheelie to the amazement and delight of those watching. It would make your day, just as looking at this still shot of the event does.

When thinking of a bunny costume, most people don't think of the amazing variety of options there are out there to choose from. And we didn't even do any of the cartoon character rabbits, which would have added even more bunny costume designs to the mix.

Mascot rabbit costumes are another bunny we didn't take a look at, just to give you some more ideas if these didn't fit into how you would want to look as a bunny at Halloween or some other event.

Whatever way you choose to go, if you wear a bunny costume, it's a sure winner, as no one seems to ever tire of seeing a rabbit come around walking on two legs, or in the case of pets - four legs.