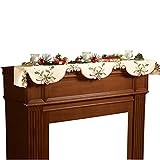 Christmas mantle scarves were originally designed to place over a fireplace on the mantle, but they are also used on any long surface, such as the top of a flat entertainment center, or even at times to hang across the top of a window.

While the majority of mantle scarves in general are used for the Christmas season, there are some that are made with earth tones that can be used throughout the fall season and into the Thanksgiving, winter and Christmas season as well.

The only Christmas scarves mantle patterns and designs I'm not too thrilled with are those that take the earth tones and attempt to push them as Christmas by placing associated themes and elements of the Christmas season on them.

There are a wide variety of Christmas mantle patterns and designs, including those that have on them or are designed as embroidery, doily, lace and fringe components, among others.

Some Christmas mantle scarves are designed in lace and white for a neutral effect, while others include all sorts of traditional Christmas themes or accessories as part of their look.

What's great about them is you can just about make or buy any Christmas mantel scarf that will go with your existing décor, providing for a nice complementary design for all to enjoy during the holiday season.

They of course go wonderfully with many other Christmas decorations you may want to add to the mix to create an amazing effect.

Which Christmas Mantel Scarves to Use

If you're ever in doubt about which Christmas mantel scarf design or color to use, you will never miss if you go with white or cream-colored lace scarves, as they are neutral in color and will work with just about anything you may decide to decorate with, or with whatever colors the rooms of your house are painted or covered in.

For those of you who haven't shopped for, made or used a Christmas mantel scarf before, be sure to take your time when searching for what you may like, as there are thousands of patterns and designs to choose from.

Even with the white or cream lace Christmas mantel scarves there can be a large number of designs to choose from. We'll include several in this article to give you a basic idea of what's out there.

One last thing about the benefits of choosing a lace or doily type of Christmas mantel scarf if you're not sure of which way to go, is you can use designs which aren't necessarily thought of as being specific to Christmas, such as a woodland design. They can work during the Christmas season because of the white or cream color they come in.

The reason why the earth tones don't work as well is because the colors aren't considered to be that of the Christmas season. White lace especially compensates for patterns and designs to cause the mantel scarf to be considered more of a complementary part of your Christmas decorations rather than a major part when they come in solid colors or vibrant designs.

With this first example of a Christmas mantel scarf incorporating many of my favorite colors in it, it was difficult not to put it in the first position of images to share with you. The brown color nestled in between the green and cream color also looks fantastic.

The reddish-purple color, deep green, brown and cream colors blend together well to make this an awesome Christmas mantel scarf that would go with almost any Christmas décor. Also looking great is the decision to go with the quilted, triangular shapes

Completing the mantel scarf are the tassels hanging from the tip of each triangle. Nicely done.

Here are a couple of outstanding examples of what Christmas mantel lace looks like.

The first one was included in the photo gallery to show you how, in the case of lace, you can have designs that aren't directly a Christmas theme and yet still work for the Christmas season. Why it works is because of the color of the lace itself, which as mentioned earlier, is neutral and can work in just about any work, no matter what the décor or color is.

That's why the woodland theme works with the top mantel pattern, as it can easily translate into a Christmas theme when accompanied by corresponding decorative items.

The bottom photo of the lace Christmas mantel scarf is a good example of that. You can see how anything could be placed on and around it for a look that would work anywhere.

This is a great close up of a lace Christmas mantel scarf with fringes on it. The addition of fringes make all the difference in the world in regard to how it looks.

What the closeup of the mantel also does is give a wonderful look at the terrific design, highlighted by the candle in the center of each piece.

Fringes are among by favorite decorative design elements, and I like them on almost anything. But they are especially attractive with this lace mantel scarf, which would look fantastic stretched across the top of any flat surface. Beautiful design.

This is a very different Christmas mantel scarf in that it has completely different colors than most I've ever seen. I'm familiar with the one that sells these designs, and usually they are offered in the earth tones I've mentioned earlier, although this one is not quite representative of that, which is why I included it among the Christmas scarf mantels shown here.

For those that may have décor that would fit this color and theme, it's one way you could use a Christmas scarf mantel and still not have it clash with the décor of your overall home.

In the end, this isn't a bad looking mantel scarf at all, as the print patterns within look very nice while relating to the season. It really helps to have the hanging message of "Merry Christmas" to complement the scarf mantel.

You could actually leave that off of the overall look and just keep the mantel scarf for earlier in the year. Once Thanksgiving was over, all that would have to be done to transform it into a Christmas theme would be to add the message.

What immediately stands out with this Christmas mantel scarf is the gorgeous deep, blue background, which helps to accentuate the white snowman and accompanying stars.

The overall pattern is one of snow, stars and the dark blue sky or maybe approaching night sky.

It doesn't surprise me that the orange stars and blue background go together well, as I've used those colors in other design combinations in the past, and they look good together. Another color combination that can look nice is blue and yellow.

As for this happy snowman, he looks great centered in the middle of the mantel scarf, with himself wearing a nice red and black scarf to ward off the cold, which doesn't appear to be bothering him at all. The color of the stars complement the wall color as well.

Overall I really like this Christmas mantel scarf, which is rooms similar to the one we see here would work extremely well.

This particular color would look good in circumstances where there are colors on the walls similar to those you see here. Notice the light brown or tan colored walls which go well with the dark blue.

Triangular shaped Christmas mantel scarves look outstanding, as does this gorgeous one below, with the solid, dark red accented by the cream-colored edging.

This homemade Christmas mantel scarf was obviously designed for this specific home, with the patterns and color, along with the edging, blending in nicely with the color of the wall, as well as the red brick fireplace.

Among the designs included in the mantel scarf are a Christmas bell, Star of Bethlehem, a tree in the snow and lace.

If you want the details on how this was specifically made, go to the bottom of the photo below and click on the bottom ink after where it says "source." 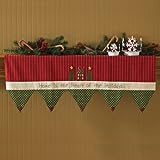 For anyone who has a fireplace mantel, entertainment center, or place you can hang a Christmas mantel scarf, it's a great way to add a final touch to the area to complete the overall decorative Christmas look you're seeking to create.

There are many designs and patterns to choose from, and if you're a crafty person, you can create your own Christmas mantel scarf to delight family and friends during the holiday season.

Usually the best places to put the mantel scarves are on the fireplace, as it's usually placed in the center of the room it was built in, so it's a perfect place to build out your Christmas decoration theme.

But that could work with your entertainment center as well, as usually they're located in a room that doesn't include a fireplace, and if so, it's also usually placed in a central location that is natural and perfect to decorate for Christmas.

These are the most obvious places to include a Christmas mantel scarf, but think outside the box, as there are a lot of places you could add them if you want to really make your home look festive.

Other places include the top of windows, stairway handles, and any number of other areas. Homes are made so differently that it's impossible to include every eventuality to look for. But the general rule of thumb is, if you can hang something on it, you could definitely include a Christmas mantel scarf as part of the decor there.