Want to make a dinosaur cake?

A collection of dinosaur cakes to choose from. Do you have a dinosaur mad boy or girl with a birthday coming up? We've got a great collection of the best ideas for inspiration. Plenty of easy options if you're in a hurry. Prehistoric cakes galore!

We made a Marzipan-covered Triceratops when my older son turned 3. Although this was very well received, I thought we could do better this year, and looked at lots of ideas first. I've put together a selection of our favorite homemade recipes and examples. We've included lots of easy options, plenty of medium skill ideas and a few for the over-achievers in the audience (you know who you are ;-)

This year we chose a Volcano Cake with fondant T-Rex, Stegosaurus and friends which delighted our four year old.

Have you checked out our Dinosaur Cupcakes?

T-Rex is always one of the most popular dinosaurs. Trying to carve or model a dinosaur cake is a bit daunting for some people. A T-Rex shaped cake pan will get you started with less stress!

This picture is of our older son's 3rd birthday cake. No it's not very good is it! But he loved it. For a third birthday dinosaur cake it just had to be Triceratops.

Our Triceratops dinosaur cake was made from loaf-shaped cakes cut into shape then covered with green fondant with details made from marzipan, including the dinosaur eggs. It's finished with chocolate balls for eyes and white chocolate drops for claws.

So what makes a good dinosaur-themed cake? If you search for dinosaur cakes you get a lot of cutesy dinosaurs that aren't identifiable as any particular species of dinosaur. That just won't pass muster in our house! If we produced a cake that was half brachiosaurus, half stegosaurus, with brightly-colored spots, the likely response would be "what kind of dinosaur is that supposed to be?". A bit of cartoon or comic effect is fine, but to get onto our list, a dinosaur cake must be clearly identifiable. We like homemade dinosaur cakes best, even if they're not quite perfect. A bit of cheating is fine though, part of our Triceratops was a shop bought cake - it needed to be solid.

These are the best dinosaur cakes that we've found.

Dinosaur Cakes - Larger Rocks Candy - 2oz bag- Use as Dinosuar Eggs as Cake Decorations
Ooh these are pretty. Could do something really cool with these as dinosaur eggs or prehistoric rocks.
Buy Now

For his fourth birthday our son asked for a Volcano Cake with dinosaurs. Excellent choice. We'd found some great dinosaur cakes as inspiration and thought we could have a go.

It was very much a dinosaur and volcano themed birthday as his main present was the Playmobil Volcano with Triceratops set.

Here's what we did:

Make a round sponge cake with a few tablespoons of cocoa powder and baked it.

Make a chocolate cake with the same recipe plus a few tablespoons of milk in a pyrex bowl and cooked it for 5 mins in the microwave.

Put the dome shaped cake on top of the flat one and cut away at an angle to get a good volcano shape. Carved a crater in the top.

Melted a large bar of milk cooking chocolate and poured in over the volcano then let it set in the fridge.

Took green, yellow and black fondant and made a T-Rex, Parasaurolophus, Dimitrodon, Triceratops, Stegosaurus and Pterodactyl. (These were much easier than I expected, my partner was very skeptical but ultimately impressed, I didn't spend much time and didn't go for perfection, but they had to be identifiable by the boys and they definitely passed that test!)

Made lava by rolling out strips of red fondant.

Use remaining fondant to create a muddy grassy green to cover the cake board and make a rock to hold the number 4 birthday candle.

We were pretty pleased with the result. It took under an hour to make including baking the cakes - decorating was a joint effort between Mum and Dad.

This Volcano Cake from Sandra Lee has full instructions including adding dry ice.

(We didn't go for dry ice this time, the kids were impressed enough as it was, we'll save that effect for the future!)

Wilton Primary Colors Fondant, Multi Pack
We used a mixed pack of colored fondant to create the dinosaurs and lava. You could make your own, but we left things to the last minute! The fondant was great to work with. I just kneaded it a little and then worked with it like playdough. I worked on a silicone mat so I didn't need to use anything to stop the fondant getting sticky and I washed and dried my hands regularly.
Buy Now

This is very impressive. 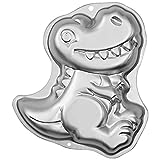 You can get great results by using a dinosaur cake pan, tin or mold with a simple sponge cake recipe. If your artistic skills aren't up to much this might be a good option - at least everyone will know it's supposed to be a dinosaur!

This cake pan reminds us of Buddy from dinosaur train.

We love the 3d Dinosaur Birthday Cake at Instructables.com. Beyond our skills, but it was the inspiration for our Triceratops cake. It's a Stegosaurus, a very good Stegosaurus. Go on, take a look, we'll still be here.

We're not quite sure what kind of dinosaur this is! So it doesn't really meet our criteria. But it's great to watch it being made and you could adapt it so it looks like a Brachiosaurus.

There are some really creative people out there who have made some brilliant dinosaur cakes. Puts our efforts to shame! Get inspired. It's worth checking out google images for dinosaur cake too. 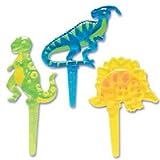 A nice pile of dinosaur cupcakes can be displayed to great effect.

If you're artistic (or willing to have a go!) then you can model fondant dinosaurs like the ones we make for our dinosaur cake.

Otherwise cupcake toppers work really well on a pile of green fondant grass or chocolate mud! And the kids love to take the toppers home as favors.

We've used this option before to great effect! You can get a personalized edible cake topper printed and put it on a cake of your choice. Very cool. You can go for an option that already includes a dinosaur theme, or a completely custom photo cake with a photo of your own. Perhaps you have a photo of your child with a dinosaur from a recent theme park visit?

You can usually get dinosaur cake toppers on eBay featuring Dinosaur Train or Diego with Dinosaurs. A great option if you don't have much time.

First you need to bake a round sponge cake, this will form the base of the volcano.

Step 2: Microwave Chocolate Sponge Cake - The top of the volcano

Now you need to make a chocolate cake in a deep round bowl. We used a Pyrex bowl in the microwave. Quick and simple.

Step 3: Assemble the volcano and decorate

Once the cakes have cooled, it's time to assemble the volcano and decorate it with baking chocolate, and fondant lava and dinosaurs.

Dinosaur Food Recipes for Kids - Bento, Sandwiches, Cookies and More
Looking for dinosaur food for kids? Dinosaur recipes for a lunch box or dinosaur party, or for everyday feeding of carnivores and herbivores? Includes our ow...

Dino Dan Party Supplies and Ideas
Do you have a birthday boy or girl who wants a Dino Dan party? Excellent choice - you'll need some Dino Dan party supplies and decorations. We've got lots o...

Dinosaur Party Invitations
Having a dinosaur party? You'll need dinosaur invitations to let your guests know where and when the prehistoric party will be. We've got a selection of free...

We hope you liked the

Have you made a dinosaur cake? Do you plan to? Which is your favorite dinosaur cake. Do you have a recommendation for our list of best dinosaur cakes? We'd love to hear from you.