How to Make Beautiful Pysanky

Easter Eggs of the Ukraine

Pysanky are part of a beautiful, symbolic Eastern European tradition that originates in the Ukraine. Unlike traditional Easter eggs that are hard boiled and dyed, Pysanky are decorated when raw and age naturally, which allows the yolk and white to become dry. As long as there are no cracks and the pysanky is not damaged, they last indefinitely. Here's how you can make beautiful Ukrainian Easter eggs at home.

* Photo courtesy of Wikimedia Commons and Lubap. This photo is made available through a CC-BY-SA license .

I was introduced to this beautiful tradition through my grandmother's collecting of outstanding pysanky. I believe they were made by member of my grandfather's Ukrainian family. They were so delicate and ornate that I was never allowed to handle them as a child, but I was inevitably attracted to them. My grandmother kept her collection in a crystal bowl and in open-air hutch where they received plenty of ventilation and were protected from direct sunlight.

In seventh grade, my class made our own pysanky at Easter time. This is where I was first introduced to the methods. Although mine wasn't traditional, my grandma placed it together with the other eggs in her collection.

Since my introduction in pysanky, I've been fascinated with the traditions, patterns, symbols and history. Every year around Easter, I seem to seek out more information about this beautiful craft.

The History of Pysanka

For more than 3,000 years, the pre-Christian people of the Ukraine have been making symbolic, decorative dyed eggs in early spring.

The word Pysanky comes from the word "pysaty," which means to "write." Pysanka is the singular word and pysanky means more than one.

Historically, the methods for making pysanky were ritualistic. Scientifically or religiously, the egg is the ultimate symbol of fertility. In early spring when the first eggs are laid, farm families would save these fertilized eggs to make symbolic pysanky. Women and girls would decorate the pysanky in the cover of night while singing protective songs. Pysanky decorating was done in private to prevent someone with the evil eye from tainting these auspicious decorations.

Today, anyone can make pysanky, and they have lost part of the significance yet the symbolism remains.

Read more about the process and pysanky-making legends at LearnPysanky.com.

To create pysanky, you will need the following items: 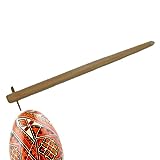 Classic Ukrainian Fine Tip Kistka
A kistka is the tool that you use to draw thin beeswax lines on your egg. These lines resist the dye and become your design. Traditionally, it has a wood handle and a copper funnel. You heat the metal part on a candle and use it to scrape beeswax. Then, it can be heated again to let the melted wax flow through onto your egg.
Buy Now

How the Pysanky-Making Process Works

If you're familiar with batik fabrics, you probably understand the process for uses dye resists. This advanced process allows the pysanky maker to capture a wide variety of colors. To create a particular design or preserve a color the area is covered with a beeswax resist.

In most cases, the first resist lines are created in white. This can be done my wrapping rubberbands around the equator of the egg and tracing the outline. Many professional pysanky artists draw their initial design lightly in lead pencil, so the lines can be traced with the stylus.

The kistka or pysanky stylus features a small hopper. Traditionally, this is made from copper. The stylus is heated in a candle flame and the hot metal cuts though the beeswax block. The stylus can then be heated again to liquefy the beeswax and create fine resist lines on the egg. After the initial lines are created, the egg is dipped in the first color of dye, which is usually the lightest.

* Photo courtesy of Wikimedia Commons and Lubap. This photo is made available through a CC-BY-SA license .

Have You Made Pysanky?

The color red traditionally symbolizes life, joy and the sun.

Orange is frequently featured in pysanky. This color is said to present strength and passion.

Warm brown hues are used to represent the fertile soils of Mother Earth.

Black is a powerful color found on many traditional pysanky. It often represents death, respectfully remembrance for the dead and the darkness of eternity.

The color green is said to represent spring and and the bounty of plant, as many pasanky makers were farm families.

Read more about the symbolism of pysanky colors at the House of Ukraine. This page opens as a PDF.

Photo courtesy of Wikimedia Commons and Lubap.This photo is made available through a CC-BY-SA license .

Symbolic motifs featured on traditional pysanky include a variety of page, pre-Christian motifs and universal symbols found across the world. Like many cultures in the Middle East, Mediterranean and North African region, people in the Ukraine are somewhat obsesses with the malevolent forces of the evil eye and are always devising ways to protect themselves and their families from their power.

Popular pasanky symbols include geometric symbols, animals, plants and celestial motifs like stars and medallions that represent the sun. Like many pagan traditions, Ukrainian farmers had the utmost resent for Mother Earth, so the majority of symbols are centered around nature

The stylized sun represented as a circular medallion is one of the most important symbols and represents the life-giving power and warmth of the sun that ripens the crops and makes the flowers bloom.

Beautiful geometric stars and rosettes are used alongside leaves, flowers and other botanical motifs.

Christian symbols, such as crosses, churches and fish, were added later.

Once the egg is dyed and all the desired designs are added, it's time to remove the beeswax resist. This is accomplished by gently heating the egg in your candle flame. Hold the egg to the flame for a brief second, and gently buff the soften wax off using a paper towel. Repeat this process until all of the beeswax is removed and your beautiful designs are magically revealed.

Once the wax resist is removed, many artists coat their pysanky with varnish, lard and other substances that produce a lovely shine.

Because pysanky are raw eggs, they must be stored in a well ventilated location. If stored properly they will last for decades or longer. For best results, pysanky should be handed carefully and never rattled or shaken. may experts recommend turning the eggs approximately twice per year.

My grandma always kept hers out of direct light. The UV rays in sunlight fade colors and may also lead to gas buildup, which could create exploding rotten eggs! :)

Read more about finishing and storing your pysanky at LearnPysanky.com 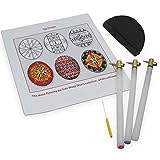 3 Kistkas, Beeswax, Cleaning Wire & Instructions Egg Decorating Kit
As with any art of craft project, you can buy the supplies little by little or you can purchase a simple kit that give you everything you need to get started. It one also includes basic designs that you can do free handed or with help from rubber bands and other tools.
Buy Now

Resources for Making and Learning about Pysanky

Have you made pysanky before? - Would you like to try it?