Tawnya is absolutely obsessed with Halloween. Everyone flocks to her for costume ideas for kids, adults, and even dogs.

If your little girl is like mine, she is probably dreaming of being Elsa from Frozen for Halloween. With the huge popularity of the film and the pure elegance of Elsa's costume, this costume will probably be on the wishlist of many girls this year. In fact, girls of any age including toddlers to teens will probably be dreaming of a frozen Halloween.

As soon as my daughter mentioned wanting to be Elsa for Halloween, I began searching online for the perfect costume. Shortly after beginning my search, I decided that the Disney costume was the very best choice. My daughter owns many dress-up costumes from Disney. I can attest to the fact that these costumes hold up very well, even after months of aggressive play. From time to time, I even have to put these costumes through the laundry, and they have managed to stay intact. With the popularity of Frozen, you may want to consider ordering this Halloween costume sooner rather than later. There's nothing worse than waiting till the last moment and not being able to find exactly what you need.

After years of buying costumes, I can tell you it is worth it to buy Disney costumes rather than the less expensive versions. The cheaper costumes are made for a one, maybe two time wear, and the Disney costume is a costume that they can continue to enjoy until they wear it out.

Princess Elsa's Snow Dress is Offered in Many Different Sizes 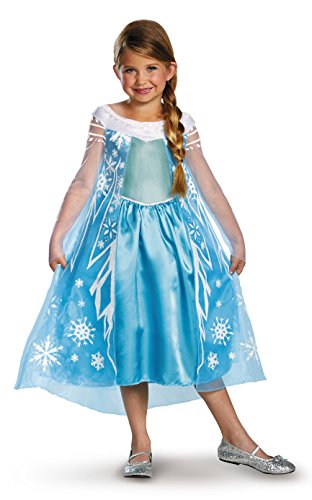 Disney's Frozen Elsa Deluxe Girl's Costume, 4-6X
Any little girl will feel like a Princess or a Queen when she wears Elsa's snow queen dress. This wintery gown is just like the one Elsa wore in the movie Frozen and is offered in many different sizes.
Buy Now

Take a Better Look at this Dress Here

The Official Trailer From Disney's Frozen

The official trailer from Disney's Frozen is embedded in my mind forever. I love this film and have watched it dozens of times. If you haven't seen it yet, or you're looking for a gift for girls, check out this official Disney Frozen trailer.