If you're throwing a fancy dress party, then why not choose a party theme?

Having a party theme is a great idea because it helps guide people in their choice of costume, plus it keeps everyone looking more co-ordinated and part of a group, adding to the fun party mood.

Not only that, but having a theme also means that you can decorate your party venue and plan your food and snacks within the theme, creating a more awesome overall effect!

Glitz, glam and casino themed parties are popular for adults as they allow you to get dressed up in dresses and suits (and bling!) and pretend you're a movie star. The following props will allow you to achieve the look you want: 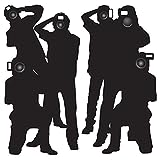 - Choose a letter of the alphabet so that all costume characters/objects must start with that letter.

- Choose a colour theme, and people dress all in that colour, or as characters/objects of that colour. E.g. Silver = Tin man, Red = tomato

- 'Song' theme; so people have to dress as song titles - such as 'Lady in Red', 'Goldfinger' etc

- Film theme; so you have to dress as a film character OR pick a specific film e.g. James Bond, Moulin Rouge or Wizard of Oz (musicals are a good choice), and people have to dress as characters from that one film series.

- Moustache party; where you have to have an interesting moustache which can be drawn on, stuck on, or you can make your own moustache on a stick:

Click here to see how to make your own.

- Have a poppy seed beard and moustache party where people style their own moustaches and beards from poppy seeds and (safe and water soluble!) glue.

- Pick a decade, and ask people to dress in the fashions of that era.

- Childhood TV characters - for instance, I could be a Power Ranger!

- Click here for the top kid and adult party themes.

- Horror Movie theme, were you dress as your favourite character from a scary movie e.g. the girl from 'The Ring', Freddie Krueger etc.

- Just a 'scary' theme with people dressing as witches, devils and other usual Halloween outfits.

- How about a Willy Wonka themed party?

- Royalty theme, where you dress as real or fantasy kings, queens, princes and princesses e.g. The Queen, Prince Charming, the evil Queen in Snow White

- High Fashion night - go Catwalk crazy with crazy 'couture' fashion outfits such as huge hats and dresses made of balloons!

- Hawaiian theme - you could make loads of cocktails in funky glasses with little umbrellas and sparklers.

- Tim Burton characters; from Edward Scissorhands to Sweeney Todd; like this.

- Pick a fashion trend from the past, such as Punk/Mod/Hippy styles.

- Cross dressing, where girls dress as boys and vice versa.

- 'Sporting Heroes/Icons' theme, where you can dress up as people like Roger Federer, David Beckham, Usain Bolt etc.

Or you could just choose a sport theme like Tennis/Wimbledon or Baseball.

- Back to school party, with everyone in school uniform.

- Tasteless party, with everyone in their worst clashing prints and awful fashion no-nos!

- Dress up as a statue or famous monument.

- Old people theme - dressing up with wrinkled tights and wigs!

Do You Like Parties Having a Theme, or Would You Rather Free Choice?